Up until these monsters remained a minority interest, I didn’t really mind them. And they came in vibrant colours too.

The two-tone paint humanises what you could call, after all, a gas-guzzling leviathan. It’s the kind of thing which ought not to be let out of fields or to leave private green lanes. But it’s hard to dislike this car, isn’t it? I always felt that Toyota Landcruisers were for people serious about off-roading – it’s these UN use and not LR’s dodgy toys.

Here this one stands, shiny and clean and entirely unmarked, on my street. I am happy to

see it though as I had forgotten about these three-door Land Cruisers (J80s, for car-code nerds). 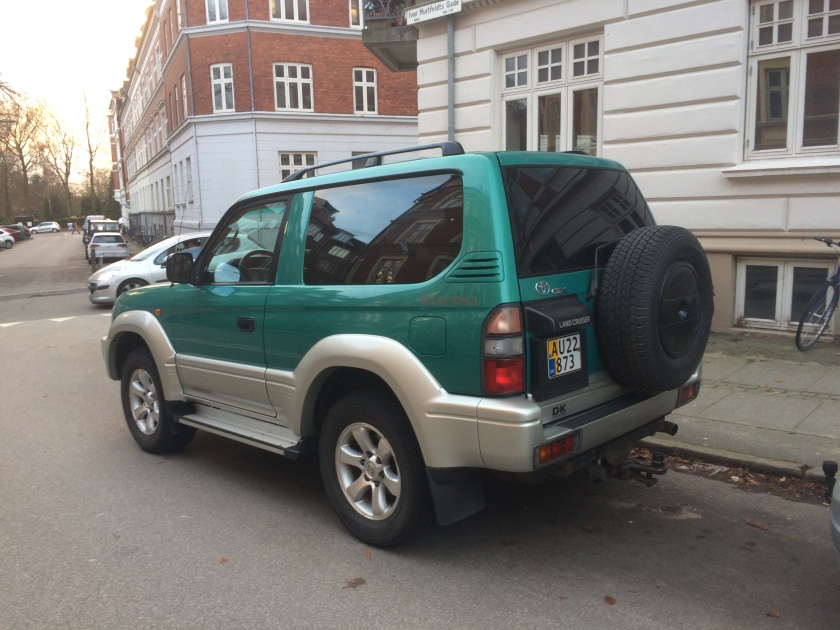 The interior looks as unremarkable as any Toyota Corolla and remains pretty much museum quality. Toyota have not compromised one bit on this interior: bland and characterless as every other Toyota from the period and that’s not necessarily a bad thing. It’s utterly serious. In a way it means you really have to want one of these cars for what it does and not what it looks like inside. This isn’t about signalling anything other than a need to plug mud and haul things.

Leather, alloy details, trinkets and soft carpets. These cannot be avoided in most SUVs because they are not supposed to be used as SUVs whereas Toyota figured this generation of Land Cruiser probably was going to lead a busy life (except this one).

The tide flowed another way after J80, the world shifted on its axis and tectonic plates shuffled in the late 90s and the Land Rover and Land Cruiser did for SUVs what Alfa’s Giulia and BMW’s 2002 did for saloon cars in the 60s and 70s. They opened people’s minds to the idea that a vehicle format can be extended and pushed. In the 1960s a sports car had two doors and a boring old saloon had four. If you wanted status you bought a sports car (or a lazy luxury barge).

The 2002 dragged status and prestige (signified by sportiness) into the saloon format. By analogy, the Land Rover and this car, a surrogate, brought desirability into the SUV format. Interestingly, while the appeal and prestige of the sport saloon was notable, it did not make all other cars into saloons. The desirability of the SUV format in contrast has meant the increasing domination of that format, edging out other formats (c.f. nice coupe**, MPV, small saloon, estate cars).

I don’t mind one or two of these SUVs here and there. This Land Cruiser has a jolly paint job and now has classic status. Today its successors from all marques loom much bigger, 100% likely to be light-blotting slabs of dark paint and 99% unlikely to ever do anything a 1.6 litre five door hatchback couldn’t.

**though to be fair, BMW still make a decent coupe and it has a rear centre armrest. Are coupes dead in the US too?

6 thoughts on “Like Brabo, Take the Hand of Druon Antigoon”