It’s been a while since we did one of these, and while today’s candidate might appear a little tenuous at first sight, look beyond the scudetto and there are chevrons galore.

First shown at the 1983 Geneva motor show, the Delfino was an attempt by carrozzeria Bertone to update the classical luxury gran turismo after almost a decade of decline. Alfa Romeo’s relationship with Bertone was long-standing, but had entered a prolonged period of stasis, with Portello forging a closer relationship with Ital Design when they were not following the muse of their own centro stile under Ermanno Cressoni.

Based on the mechanicals of the range-topping Alfa Six model, and utilising its 2.5 litre V6 power unit, the Delfino was a proposal for a modern luxury GT of the kind the mainstream Italian industry was rapidly shying away from, with Lancia’s troubled and declining Gamma Coupe being the main flagbearer for the format. Bertone described it as ‘Love at first sight’. “A complex of indescribable but exciting sensations. An up to date line, harmonious but restrained. Comfortable seating for two – generous luggage space – generously sized wheels – perfect aerodynamic profile, for silent driving. A clever blending of glass and steel.” And so on.

Styled under the supervision of Marc Deschamps, the successor to Marcello Gandini at Bertone following the latter’s abrupt departure, the car’s design illustrates the classic carrozzeria white canvas. Very much a Bertone first and an Alfa second (or maybe even third), it contains most of the house styling tropes of the time with what amounts to a token, if rather generously proportioned scudetto as a token gesture towards its intended client.

But while it’s pure ’80s Bertone in its wholesale adoption of horizontal lines and graphics, there is a third party to this design. The previous year, the Gandini-attributed Citroën BX was announced and with Bertone involved in proposals for the forthcoming full-sized Citroën model (1989’s XM) there is a good deal of similar thinking on display here, in surface, skin and graphics. 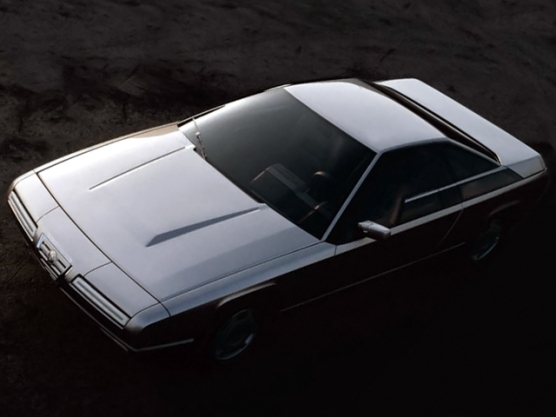 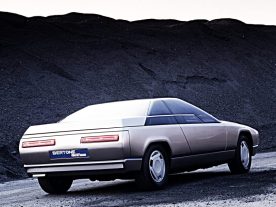 This Bertone / Citroën influence is apparent in the wheelarch shapes, the treatment of the canopy, which contains echoes of the later XM (although some may disagree) and even the style of the roadwheels, which appear similar to those fitted to certain BX models. In fact, substitute a more Citroënesque nose treatment and give it a glassback and you’d potentially have what amounts to a contemporary take on the SM.

The interior was pure mid-80’s conceptual fare, with Vélizy-inspired control pods grouped around the steering wheel but the most fascinating aspect of the proposed instrument panel is how conceptually similar it looks to what you can choose to purchase from your Mercedes-Benz dealership today.

Of course, we know that Deschamps, following his Bertone period (and authorship of the XM) went on to an interesting solo career, one which may indeed have inadvertently (or otherwise) been a good deal more influential than hitherto imagined. The Delfino however wasn’t the answer for Alfa Romeo in 1983, partially because they were in no position to do anything as ambitious (or expensive) and because Biscione apart, there really was so little here for them to work with.

More cars that could have been Citroëns
More on Marc Deschamps