But leaving popular culture aside, the mood music was more sombre. In the UK, land speed record holder, Donald Campbell died attempting to break the water record on Lake Coniston in his Bluebird K3 jetboat. While back on terra firma the advent of the Road Safety Act set a maximum permitted blood alcohol level, allowing breathalyser tests to be performed on drivers for the first time.

Across the Atlantic, the National Transport Safety Board was created to investigate transportation accidents and further the cause of road safety. In the perennially troubled middle East, following the Six Day (Yom Kippur) War, an oil embargo caused fuel shortages in the West, illustrating you didn’t need squadrons of Dassault Mirages to make an impact. A lesson which wasn’t at all lost on the oil-supplying Gulf states.

While US muscle car fans rejoiced at the advent of the Shelby Ford Mustang GT-500, those of a more sensitive nature wept a quiet tear at the news that the last ever Panhard motor car was produced.

British sports car enthusiasts keenly awaited the announcement of a new six-cylinder MG model, but the resultant car saw anticipation turn to apathy. Initially conceived as a replacement to the dated Austin Healy 3000, the car dubbed ADO 51/52 used a modified version of the MGB bodyshell, but with the internal structure forward of the bulkhead redesigned to accommodate the larger engine and a new front suspension design.

The MGC’s problems revolved around its engine, a heavily revised version of the existing C-series unit, intended for the ADO 61 saloon. MG’s Nigel Thornley* subsequently told chroniclers that the engine was to have included all the developments MG had developed for the rally versions of the ‘big’ Healey, but that “some idiot” at Longbridge designed an engine 70 lbs overweight, with increased frictional losses and a cylinder head design which gave a very poor account of itself. What’s more, Thornley asserted that by missing its weight targets, the C-Series engine necessitated the car’s front suspension being in his words, “a botch job”.

Technically, there was also a stronger gearbox (with the option of an auto), bigger brakes, larger roadwheels – which had the knock on effect of increasing steering effort which was addressed by lowering the rack’s gearing. Visually, it was identical to the MGB, apart from a sizeable power bulge in the bonnet. Well before launch, it’s believed Donald Healey disowned the car, so it was launched somewhat half-heartedly as an MG.

To say the model received a less than rapturous press reception is an understatement, but with so little to distinguish it from the smaller engined MGB and with so little on offer (both visually or dynamically) in return for the extra outlay, the fact that a mere 8,999 examples were produced up to its demise in 1969 can’t have been a surprise. Yet it wouldn’t have taken much to turn it into a half-decent car. Another BMC own-goal.

Meanwhile in Lombardy, specialist Italian car maker, Iso; still reeling from the death of its founder Renzo Rivolta the previous year, regrouped under his son Piero. Looking to expand the business, he commissioned a new four seater to rival the Maserati Quattroporte – at the time the only Italian exotic saloon available. Launched in September 1967 as the Iso Rivolta S4, it used a modified version of the GT / Grifo platform and running gear. Engines were bought-in Chevrolet small-block V8 units of 327 or 350 cubic inches, mated either to manual or automatic transmissions.

Believed to have been styled by Giugiaro at Ghia following his departure from Bertone, and clearly a derivation of the De Tomaso Mangusta from the same magic marker, the S4 was a striking and from most angles highly attractive motor car. It shared its Frua-shaped Maserati rival’s somewhat polarising style; particularly evident in the treatment of the distinctive canopy area. 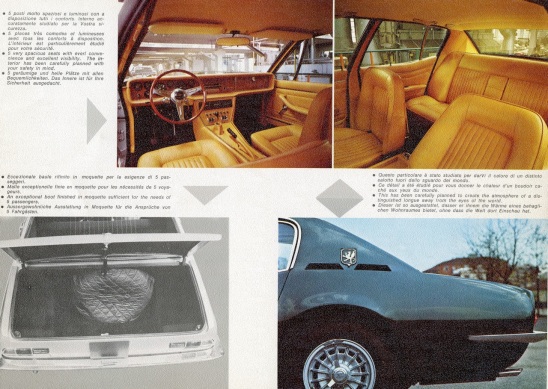 Image: spray for all 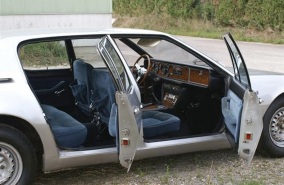 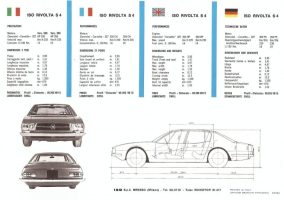 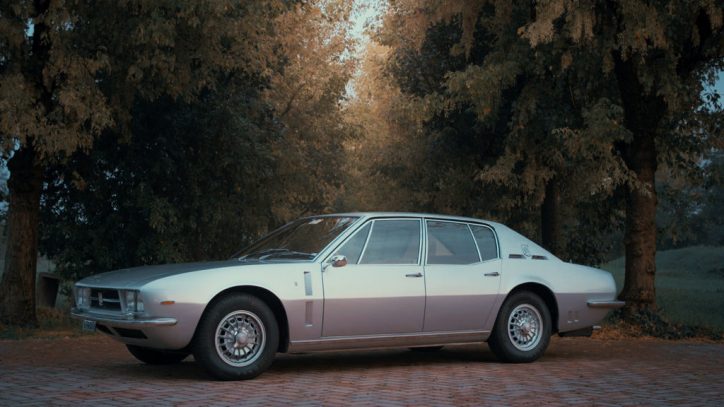 The styling  could be said to have broadly been a success, except for the fact that the car’s stance suffered from its relatively narrow track, which from some standpoints (much like the Mercedes W140 and the current Lexus LS) lent the car the impression of being overwhelmed by the bodyshell.

Available to customers from 1968, the early cars suffered from quality issues stemming from a very convoluted production process, a matter remedied two years later when production was brought entirely in-house, and the car was effectively relaunched under the Fidia nameplate.

Iso claimed the S4 as the fastest and most prestigious four-door in the world, a matter its Modenese rivals might have taken issue with. But if the cognocenti turned their noses up at Iso’s use of US-sourced powerplants, a good many of the well-heeled did not, appreciating the performance, relative lack of temperament and durability of the GM and later, Ford V8s. Notable S4 / Fidia owners included John Lennon and James Last.

When Iso Autoveicoli S.p.A folded in 1974, not only the Fidia went with it. The entire GT era was coming to an abrupt end and only the most storied names would survive.

Aston Martin would ultimately be one of the survivors but in 1967, they were also looking to expand. Not into new markets or indeed new concepts, but further upmarket. With customers demanding more space and greater creature comforts, a bigger car necessitated more power, which then required a new, larger engine and so on. Having originally turned to carrozzeria Touring (designer of the original DB4 model) for the stillborn MP 226 proposal, novice interior designer, William Towns put forward the chosen design which could be stretched or compressed to encompass 2-seater, 2+2 or full four-seater concepts.

In a parallel with Iso, Aston Martin were interested in catering to customers who wanted four doors, so the DBS largely began life as one, with the definitive 2+2 GT being shaped alongside. A very small number of Lagonda-badged four-door models were subsequently produced.

The DBS was a bigger, heavier less wieldy vehicle and its styling reflected this, being more muscular and imposing than the more delicate DB4/5 models which preceded it. Designed from the outset to house Aston Martin’s all-new four-cam V8, it utilised a widened version of the outgoing DB6’s steel platform chassis with a slightly longer wheelbase. The DB6’s double wishbone front suspension was retained, but a De Dion tube was employed at the rear – the first Newport Pagnell car to be so-fitted since the troublesome Lagonda Rapide earlier in the decade.

With the V8 not fully developed, the most powerful version of Aston’s in-line six engine was fitted, which struggled in the heavier and considerably less aerodynamic DBS body. The new car suffered from a greater frontal area and excessive front-end lift at speed. Only the fitment of a front spoiler saw performance up to marque standards, but even so the six-cylinder DBS was regarded as something of a slouch. 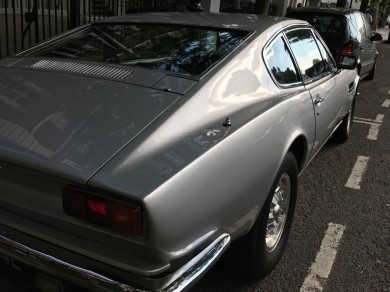 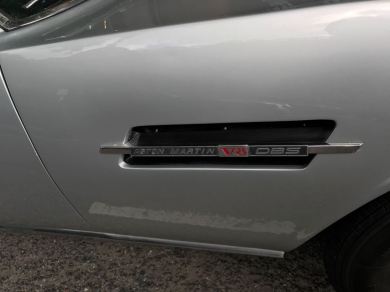 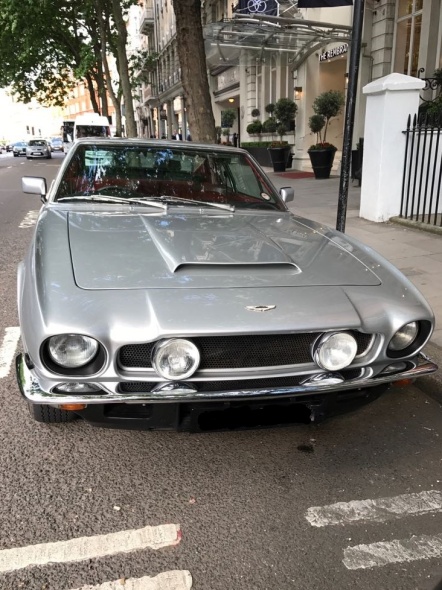 The V8 model was introduced in 1969 and although development cars used a fuel injection system by AE Brico, the Bosch system chosen for production proved so troublesome it was substituted for carburettors in 1973. A year before, the model was given revised nose styling and a new name, and in this essential form it remained until its eventual demise in 1989.

Given its lengthy production run (twenty two years), it really ought to have set the template for the subsequent iterations of the marque, but it didn’t really. Jaguar’s Double Cross did that. The motor business really is a funny old game.

© Driven to Write. All rights reserved.

Meanwhile, some cars from 1967 we did write about

4 thoughts on “Anniversary Waltz 2017: Reflections in a Golden Eye”