Apart from contributing more than a few inventions of enormous importance and automobiles of superior significance, Fiat have also established themselves as true masters of the counterproductive facelift.

Italy unquestionably is a country of immense creative energy. More to the point, it is one of the hotbeds of automotive design and style, not to mention: taste.

And yet few marques have so comprehensively struggled to give its products a stylistic boost halfway through their respective productions runs as Fiat has. So much so, in fact, that describing any facelift effort as ‘Fiat bad’ acts as a fixed term denominating a particularly ill-advised attempt at refreshing a car’s design.

So, in order to lend some unrequested substance to the cliché, let’s have a look at some of the cases in point.

In 1977, Sergio Sartorelli’s original Ritmo was quite a bold statement. A piece of raw industrial design, rather than yet another offspring of the Italian ‘folded paper’ school prevalent in those days, the Ritmo not only embraced the plastic bumpers that had become such a difficult feature to be incorporated into any automobile’s shape in those days, but turned them into a signature feature.

Taking the astonishingly explicit graphics of the Ritmo’s round door handles, ‘squircle’ air vents, bonnet scoop and wheel trims into account as well, Sartorelli’s stylistic audacity cannot be overstated – and that’s even without mentioning one of the most advanced dashboards in this class of car at the time.

Of course, boldness has the habit of being stimulating and alienating at once. In the Ritmo’s case, the ingenious use of plastic as a decorative element was too much to bear for potential customers shopping or a car that wasn’t a Golf, Kadett or Escort. This in turn led to the Ritmo getting rid of all that had defined its appearance as part of a very comprehensive facelift.

So gone were the bumpers doubling as headlight housing and grille, the bonnet scoop and even the round door handles. Instead, the Ritmo gained side plastic cladding à la Saccobretter, a generic ’80s style Fiat grille, even more generic, rectangular door handles and light units in those places where one usually expected to find them.

The end result may have been more palatable than Sartorelli’s Ritmo, but it was also bereft of any character, like a cross between a VW Golf and a Simca Horizon. The recently introduced ‘five bar’ logo hence became an outright necessity to denominate this automobile as a Fiat. 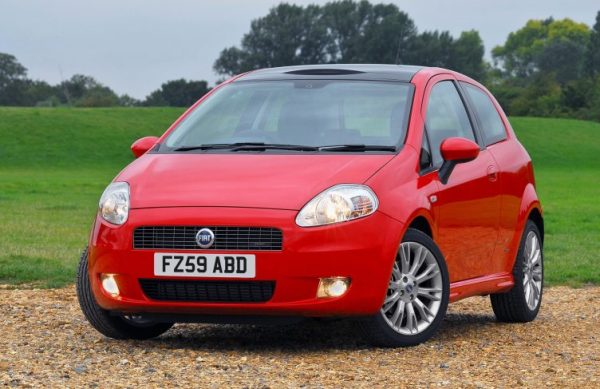 Such treatment wasn’t the preserve of Sergio Sartorelli though. Even Giorgetto Giugiaro wouldn’t be spared the indignity of having one of his designs butchered by Fiat’s Centro Stile. In his case, it was his 2005 Punto, as it was turned from Grande into Evo. In that process, it was disfigured by the application of an utterly inconsistent front that seems to have been an equally foolish and incompetently executed attempt at bringing the Punto in line with Fiat’s other, more recent bestseller, the 500.

Yet the end result looks more like the combination of Fiat 600’s front badge with a very ill-advised homage to the Ritmo’s contrasting plastic trim – which sounds far more intriguing than it was.

In a way though, all of this was to be expected. For the previous generation of Punto hadn’t fared much better.

Despite not being the most brilliant of Fiat’s entries into this class of automobile to begin with, even the Mk2 Punto didn’t deserve the kind of drastic mutilation it was to receive in 2003.

As part of Fiat then-CEO, Paolo Cantarella’s ill-fated attempt at re-aligning the Fiat brand as purveyors of solely rational, cheerless automotive devices (which was already working out very well indeed with the Fiat Stilo by this point), the Punto received not just a grille that was almost as bland as it was ill-positioned, but also a perplexingly wayward shutline on its front wing that suggests actual changes to the Punto’s body-in-white had been carried out in order to accommodate the new, unbecoming front lights.

Similarly, the Punto’s traditional vertical rear lights  were also joined by an insert in the tailgate, which again suggests rather costly changes to the car’s metal parts.

This second generation Punto, in its original form, had also seen the introduction of Fiat’s retro ‘laurel wreath’ logo. In yet another astonishing case of changes in corporate identity unmasking far more significant changes in corporate attitudes (see Mercedes-Benz for a more recent reference), the loss of Fiat’s perfectly recognisable ‘five bar’ logo in favour of the significantly less modern and expressive ‘laurel wreath’ badge suggested that the company had lost its footing.

There are, of course, many more examples of the ‘Fiat bad’ facelift than the ones mentioned here. But this isn’t about completeness, anyway. It’s about how car design doesn’t just reflect upon the talents of the people who create it, but also how significantly it is informed by corporate attitudes – for better or, more often, worse.

(to be, probably and regrettably, continued)

The author of this piece runs an obscure motoring site of his own, which you may choose to visit at www.auto-didakt.com