Two of the more storied automotive marques happen to have owned representative headquarter buildings at some point. The respective fates of these edifices has proven somewhat poignant.

High-rise buildings inevitable lend themselves to illustrate human hubris. As the building of a monument to oneself is among the least humble of acts imaginable, skyscrapers typically invite less-than-kind comparisons: From the bible’s Tower of Babel to JG Ballard’s High-Rise, architecture aiming for the skies regularly acts as a metaphor for an aloof state of mind.

The automotive industry, whose core business of selling a commodity finds itself in constant battle with that product’s simultaneous role of a social entity, is even more prone than others to fall for the appeal of the tall building. As a consequence, there are almost as many high-rises sporting the names of (former) American industry behemoths as that of a certain property-developer-turned-reality-tv-host-turned-leader-of-the-free-world.

But even in less high-rise-crazy Europe, the allure of manifesting success through the use of brick and concrete wasn’t lost on some automotive big shots, particularly in Munich, Germany, and Turin, Italy. Comparing and contrasting how each one of these prestige projects turned out over time serves as a rather poignant metaphor for how the fortunes of the companies involved changed.

With Western Europe in full post-war swing, the automotive scene of the early 1950s was both crowded and diversified. Certainly among the more established and particularly sophisticated purveyors of motoring devices was Lancia. Despite hardly being on the most solid of financial footings, the company’s then-president, Gianni Lancia, deemed a new headquarter building for the sprawling car, lorry and bus manufacturing business a necessity.

These considerations eventually resulted in the Grattacielo Lancia. Built on the premises of Lancia’s Borgo San Paolo factory in Turin, this 62-metre-tall edifice not only served the purpose of housing the required offices, but encapsulated more than just a faint whiff of the spirito Lancia.

Designed by architect, Nino Rosani, with input from legendary Italian architect/stylist/designer, Giò Ponti, Gratticielo Lancia was both a high-rise and a bridge, connecting two areas of the Borgo San Paolo plant that had hitherto been divided by a pre-existing street. In terms of proportion and detailing, Gratticielo Lancia was a bonafide example of Italian post-war modernism: less austere than Germany’s Dessau & Ulm-influenced efforts of the time, with a lightness of touch only French contemporary designs could hope to match.

In this regard (and many more), Grattacielo Lancia comes across like the smaller, slightly less intricate brother of Milan’s Torre Pirelli, which was designed by Ponti, alongside Italian architect/engineer extraordinaire, Pier Luigi Nervi. 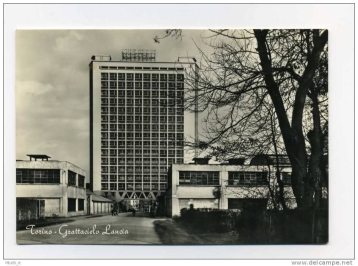 However, by the time construction of the building had finished, Gianni Lancia had had to cease control of his family’s business and sell it to the cement industrialist Pesenti family. Regardless of this, the proud LANCIA lettering on the Grattacielo’s rooftop and the advanced nature of the building continued to act as hallmarks of an equally modern product range. Lancia certainly had the headquarters this special company deserved.

Things were slightly different on the other side of the Alps in those years though. Bayerische Motorenwerke AG of Munich Milbertshofen was the struggling maker of a bewildering range of cars, ranging from bubble cars (built under licence from Iso) to oddly-styled, V8-powered saloons, GTs and sports cars that couldn’t hope to match the sophistication of what the supposed competitor Mercedes-Benz was offering.

BMW’s bankruptcy was only prevented last minute when German industrialist and war time profiteer, Herbert Quandt, decided to take over majority ownership. Yet it was the smash success of the brand’s Neue Klasse range of mid-size saloons, not to mention the bankruptcy of fellow competitors, Borgward (1963) and Glas (1966), that eventually saved BMW for good.

As a sign of the company’s recovery and modern spirit, new high-rise headquarters on the fringes of the Milbertshofen factory were commissioned.

The Vierzylinder was an enormous, concrete statement of intent. And the product of sophisticated engineering, what with its four Zylinder being suspended from the building’s reinforced core.

Built next to Munich’s olympic village for the ’72 games and in time to be finished (at least on the outside) for this event, which would put Munich at the centre of the world’s attention, Schwanzer’s design did not merely pay homage to the engines at the core of the Bayerische Motorenwerke, but was also part of the bigger ensemble.

Alongside the advanced satellite town of the olympic village, the Fernsehturm, Otl Aicher’s groundbreaking pictograms and, especially, the Olympiastadion with Frei Otto’s marvellous glass tent roof construction, the Vierzylinder formed the background for what was intended to be ‘The cheerful Games’.

History – or, more precisely, a group of Palestinian terrorists and a German police force woefully unprepared for anything other than drunkards – may have ensured that collective memory of the ’72 summer olympics was something other than ‘cheerful’.

But these new edifices acted as architectural signifiers of a Germany that was far removed from the daunting scenery Albert Speer had devised for the Berlin summer Olympics 36 years previously, regardless. 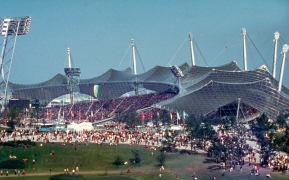 Once the olympic games had ended, the Vierzylinder on Petuelring remained not just a landmark of the Olympiapark, but a symbol of modern Munich. Its architecture even proved to be enough of a draw to have the building prominently featured in Norman Jewison’s 1974 sci-fi dystopia, Rollerball.

In the years and decades to come, the surefooted stewardship of Eberhard von Kuenheim meant the stature of the company eventually began to match that of its headquarters’ architecture. In that sense, the Vierzylinder turned out to be a self-fulfilling prophecy of sorts.

Grattacielo Lancia meanwhile continued to serve as that company’s headquarters, despite Lancia having been taken over by Fiat in 1969.

However, some 30 years later, the differences between Via Vincenco Lancia 27 and Petuelring 130 are significantly more marked.

The Vierzylinder (a listed landmark since 1999), has undergone extensive renovations between 2004 and ’06, entailing the move of all offices off location for that period. This renovation extended to the adjacent BMW Museum as well, while the BMW Welt customer center/Erlebniswelt was built across the street. Both the BMW Museum & BMW Welt have since joined Bavaria’s highest ranking tourist destinations.

As the cleared Vierzylinder was getting refreshed, the similarly unoccupied Grattacielo Lancia was sold by Fiat to a consortium of investors intending to convert the building into luxury flats.

As of early 2018, Grattacielo Lancia remains in a half-renovated, unused state – apart from the odd art exhibition taking place.

One of Italy’s main ills has been a lack of consistency. This also shows in the fact that Lancia, once among the most prestigious, respected marques in the business, is nowadays confined to selling a long-in-the-tooth supermini to the Italian market only. Usually, throwing away such enormous brand equity would appear to be a luxury few can afford.

Some might consider BMW’s care and preservation of the Vierzylinder an act of self-adulation. But in truth – and even more so in an age of X2s, X4s and 2 series Active Tourers – its a luxury the Bavarians must afford if they are serious about their brand equity. And care about its soul.

2 thoughts on “A Tale of Two Towers”