The best and brightest Daimler-Benz managers showing the Americans how to take the product side of the business was this. Seriously ?

Was it ignorance? Negligence? Arrogance? The motive(s) may be up for debate, but there’s no arguing about the utter lack of lustre this 2007 vintage Dodge Avenger embodies. Nor that the utter cynicism of this product was the result of management decisions betraying one or all the above-mentioned traits. Naturally, by the time the Avenger was brought to market, most of the people who had made these decisions had departed for pastures new, considerably further afield than Auburn Hills.

After a most glorious turnaround performance abroad, former Chrysler CEO and self-styled Dr Zee, Dieter Zetsche, had returned to the parent company in Stuttgart, where he immediately instigated the fire sale of the American car maker. His right-hand man, Wolfgang Ayerle/Bernhard, had already left, but would eventually rejoin Zee at Stuttgart. Chrysler chief designer, Trevor Creed, was about to retire one year after the Avenger’s unveiling, presumably not on a particularly high note. 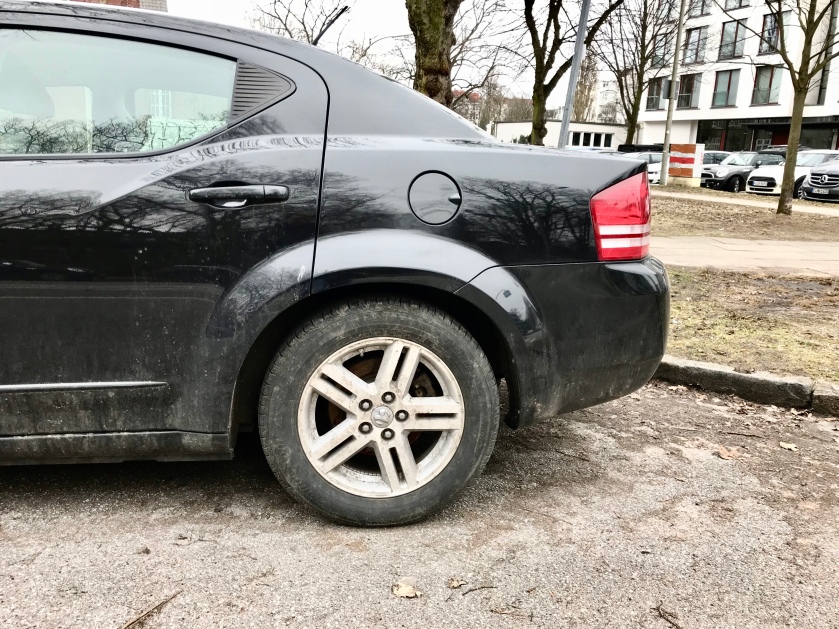 What these respected men were seemingly attempting to flee from was an automobile design, part of a product offensive so grotesquely ill-executed, it remains unfathomable to this day. The 2007 Avenger could hardly be described as the worst offender among the likes of the Dodges Nitro and Caliber, the Jeep Commander or the 2007 Sebring, but it encapsulates the carelessness, corner cutting and cynicism just as well as any of the other cars that constituted Daimler’s parting gift for its former American outpost.

As with all the other cars mentioned, the Avenger betrays a conscious effort to design a car that is interesting, rather than anodyne and competent, as was the norm within this sector of the market at the time. Something with a bit more sparkle than a Camry, perhaps. As a result, elements like the coarse rear haunch, whose shape is supposedly, but not quite picked up by the C-pillar, was added in order to stimulate a sense of flair and excitement.

In conjunction with the awkward angle of the rear window, not to mention the truncated boot and horrible ribbed triangular piece of plastic trim that only highlights the C-pillar’s awkward, massive proportions, the haunch proves to be more adept at unmasking the car’s basic deficiencies than hiding them. The way in which this haunch was incorporated also results in a very square boot section, lending the rear aspect an most leaden stance.

Some attempt to counteract this effect appears to have been made through the inclusion of an indent on and underneath the boot lid. But the simplistic, clumsy shapes these create only heighten the impression of stylistic carelessness. A similar indent can be found below the Dodge’s front grille too, where it has the surprising effect of visually weakening what is an otherwise very bluff front end.

It is this combination of appearing heavy, yet insubstantial that proves to be the Avenger’s undoing. It is a car design that is primitive, rather than simple, whose flourishes in reality only serve to highlight these most basic shortcomings. That many components, like the rubbing strip or auxiliary lights, appear to be non-bespoke, off-the-shelf units (even though they possibly are not) only adds insult to injury.

While some might like to deflect some of the blame for the Dodge’s shortcomings onto its (allegedly Mitsubishi-sourced) FWD platform, there simply is no excuse for the poor execution of the detail design, the terrible stance (which, incidentally, is only exacerbated by the inflated wheel arches) or the ill-advised, shouty tropes like the haunch and C-pillar treatment.

There is no shame in producing and designing honest, cheap and cheerful motor vehicles. The Dodge certainly was cheap, but its cheerfulness and honesty resemble that of an alcoholic, chronically depressed day labourer putting on a clown costume and taking half the money he collected for charity to buy himself more booze.

That some of the people in charge during the development of this equally cynical and primitive device are nowadays considered luminaries of the automotive industry proves that this business can be far more forgiving than is often claimed.

The Dodge Avenger, however, will not get off so lightly.