Robertas Parazitas looks at the changing shape of the European car market over the last twenty years.  The numbers tell several stories; some are manifestly obvious, others may surprise you.

The right-hand column lists European sales in 2017, highest to lowest.  The numbers to the left tell several stories, many of them unhappy. 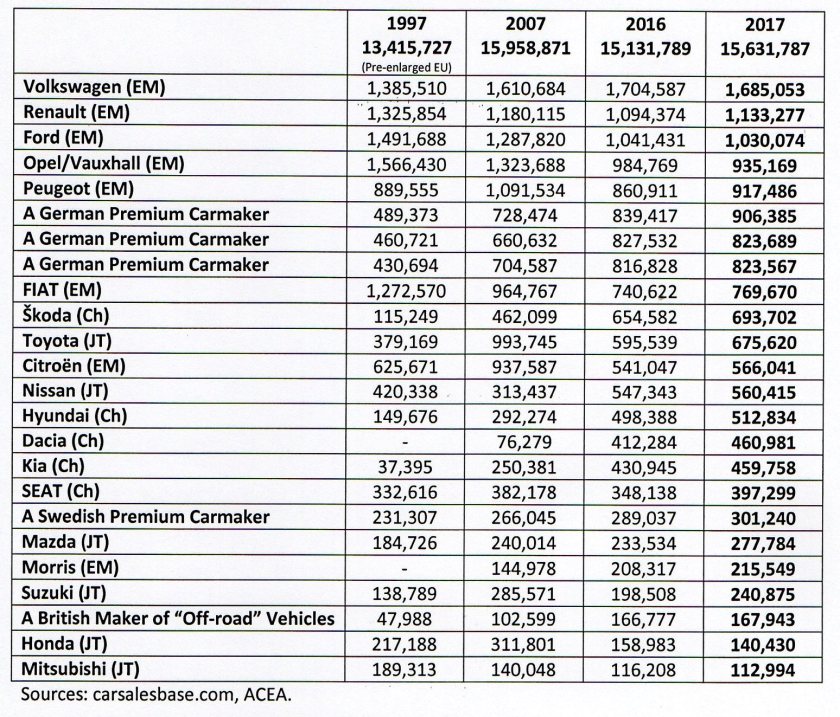 The biggest change has been the irresistible rise of the three German premium brands – up 85-91% over the last twenty years. They occupy positions six to eight and, given Ford and PSA’s contentions that profits matter more than volume, could move higher still. Everyone knows this – the evidence is before our very eyes. I’ve taken this fact as read, and concentrated on the non-premium makers, in all their rich and diverse variety.

The choice of 1997 as a starting point is numerically convenient, but turns out to be a significant one. The major Japanese manufacturers’ EU operations were firmly established, though running some way short of maximum capacity.

Premium was still genuinely premium, but the incursion into the mass market was underway. The Audi A3 had arrived in 1996, and Mercedes-Benz would present the A Class in September of the following year.

The VAG-era Škoda Octavia had just been launched and VAG were not yet outright owners of Škoda Automobile, but had by 1997 ramped up their stake to around 70%. This might have seemed a peripheral matter twenty years ago, but now Škoda are Europe’s tenth-biggest selling car marque, and hampered only by production capacity from moving several steps further up.

By my reckoning, the manufacturers fit into three discernible categories:

European Mainstream (EM) – long established, European headquartered brands. Ford and GM have been in Europe so long that they are effectively assimilated – to complicate matters further Opel and Vauxhall are European once more.

Challengers (Ch) – Brands of various origins and ages, which existed only on the margins of mainstream sales two to three decades ago.

The first two categories are clearly the “squeezed middle”, the numbers eroded by premium brands above, and the challengers below. Only Volkswagen hold firm, although the Peugeot brand looks relatively constant based on the chosen sampling points.

The order of the top five is the same in 2017 as it was in 1997, although there has been some jockeying for position in the years between. Indeed, the raw figures do not reflect the existential crises faced by a number of the players over the years, particularly at the end of the last decade.

Sales performances can be distorted by such things as the chauvinism of certain domestic markets, and the odd “killer” or “saviour” product. In particular, those who recognised the potential of the MPV and SUV/CUV sectors reaped the rewards of their daring.

Of the five “challengers”, Škoda, Hyundai, and Kia have all but graduated to the mainstream, based on consumer acceptance and pricing.

Dacia remain low-end by choice, and the numbers suggest that they have got things very right. With a limited range based on a single platform, they’re marginally ahead of Kia, who are vaunted as a stellar performer and have far wider market coverage. Dacia profit margins are said to be amongst the best in the industry which is further good news for the world’s biggest car manufacturing alliance.

For the Japanese makers, the cup of woe overflows. Only Nissan, Mazda, and Suzuki beat their 1997 figures last year. The mighty Cashcow and inexplicably popular Puke do the trick for the first, credit is due to the other two for their product-led success.

As for the remainder of the Japanese brands, one can only conclude that Europe’s market saturation, near-zero economic growth, and political uncertainty has driven the decision that other territories are better theatres in which to play out their ambitions. This cannot wholly excuse Honda’s collapse to less than 1% of the European car market – something is badly wrong with the European operations of this once-revered carmaker.

Honda’s shockingly poor 2017 performance was one figure which had me re-checking the sources. The other one which made me do a double-take was Fiat’s 769,670, behind Peugeot and just ahead of surging Škoda in the non-premium chart.

I have a great fondness for Fiat, but their market coverage is hopeless; they have all but given up on the Punto, and their SUV/crossover offering is limited to the Panda 4×4 and 500X. Somebody must be buying them – if the Lancia White Hen was aggregated into the Fiat numbers they would be no.7, ahead of two of the German premiumists.

And finally let us not forget the fallen of every category. The premium sector has lost Saab, and Lancia sits in a strange state of limbo. The European mainstream’s casualty was Austin, which had assumed the Rover name for its last sixteen years.

Life can be hard for the challengers too. Europe has lost Daewoo / Chevrolet, Chrysler’s mainstream passenger cars, Proton, Perodua, and Daihatsu.

There could be worse to come, and it is the established mainstream manufacturers who have to fight hardest for numbers, position and profitability.

Can the continent really accommodate over twenty five significant brands and fourteen parent companies manufacturing within its borders?

18 thoughts on “Two Fevered Decades – Taking the Temperature of the European Car Market.”