Cometh the hour, cometh the car. 1988’s E34 BMW 5-Series arrived at just the right moment, redefining the model line and clarifying a template that arguably hasn’t been bettered.

If 1961’s Neue Klasse saloons served to define Bayerische Motoren Werke’s style template and 1966’s 1600-2 popularised it, the Paul Bracq-inspired E12 5-Series of 1972 would take the design principles of Wilhelm Hofmiester and recast them in a modish, yet still highly disciplined context.

A design which married a sharply pared and engineered steeliness with an almost Latin softness, the E12 became BMW’s visual touchstone for almost two generations. So much so that its replacement, 1981’s E28 was essentially a reskin of the outgoing car.

While selling strongly in its early career, the advent of Mercedes’ hugely accomplished W123 saloon in 1976 saw the 5-Series latterly become a second-fiddle player in its home market, and while the BMW board couldn’t afford to replace the E12 with an all-new model at the time, the third generation Fünfer would remedy that.

Originally to have benefited from the sort of common components strategy which is now commonplace across the industry, the E34 programme’s gestation was problematic. Work commenced around 1980 under the supervision of Karlheinz Radermacher, who espoused the shared components policy, but complications soon arose.

It became apparent that sharing a large proportion of its structure with its larger (E32) 7-Series sibling would not only impose onerous restrictions upon chassis engineers and stylists, it caused them to miss the programme’s weight targets by a country mile.

However with the car’s engineering direction redirected under Hans Hagen, a new face within the Petuelring’s Forschungs und Innovationszentrum technical centre began to impose his will, quickly usurping Hagen and directing E34’s final path to market. His name – Wolfgang Reitzle, the man behind the E32 7-Series.

In production form, the E34 shared only a few floorpan pressings, sills and rear axle mounts with its larger sibling. With a near-unique bodyshell, BMW engineers were able to repackage the car, placing the emphasis back on dynamic virtues rather than the final millimetre of head or legroom.

A more driver-focused car than the Seven, E34 employed a similar suspension layout, (struts up front and a well-located semi-trailing arm system aft) but the hardware was lighter, uprated, and differently mounted for superior driver engagement. Electronic driver aids would also form part of the specification.

Engines were initially the familiar BMW in-line fours (M40) and sixes (M30) with capacities ranging from 1.8 litres to 3.5 litres, but 24-valve sixes (M50), larger capacity V8’s (M60) and diesel power units would follow over the course of the car’s lifespan.

Shaped under the supervision of Claus Luthe with styling duties initially credited to Ercole Spada, body design took its cue from the E32 7-Series that was developed alongside, both of which demonstrated a marked departure from BMW’s previous severe formality. However Spada departed the Petuelring in 1983 with E34 incomplete, with Luthe believed to have assigned its completion to a youthful J. Mays.

Regardless of authorship, E34 was a handsome and superbly proportioned shape; to many eyes, even better looking than its larger sibling, both evolving and simplifying themes which had found their ultimate expression in the 7-er both in exterior style and within its cabin.

More compact in size, with a more coupé-esque roofline, E34 may have looked more athletic, but the larger car was the more definitive and richer design statement. An equally handsome Touring estate model (a first for the 5-er) was added to the range in 1990.

Launched in January 1988, the E34 hit the ground at pace, with a year’s worth of orders taken in a matter of weeks. Critically too, the neue-Fünfer was lauded, with the motoring press as one praising BMW for not only redefining the luxury sports saloon, but by the standards of the day at least, codifying it. 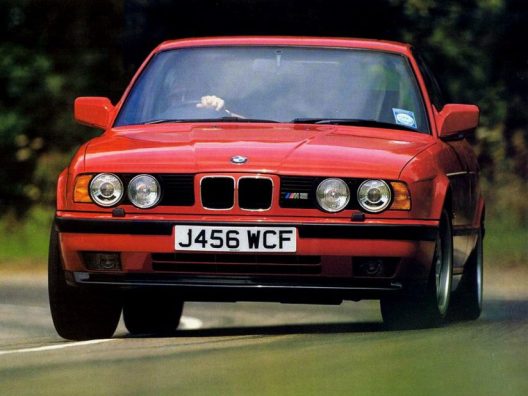 Edging closer to perfection was BMW Motorsport division’s below radar offering, although some might instead have argued in favour of Alpina’s more overt B10 biturbo rival. Thomas Ammerschlager, the M-Division’s lead engineer told journalists in Autumn 1988, “the new M5 doesn’t need go-faster cosmetics”, a statement his modern-day equivalents might wish to meditate upon. With over 300 bhp at its disposal and a maximum (de-restricted) speed of over 170 mph, the M5 proved faster and more capable than any four-door rival – until the advent of the Mercedes 500E at least.

But even at less rarefied sections of the market, the E34 offered a combination of virtues that Mercedes Benz, even with their class-defining W124 rival often struggled to match. Certainly, by most reckoning, the BMW had the Swabian’s measure – a matter of some concern at Stuttgart-Untertürkheim.

The E34 would prove to be BMW’s most rounded product. Less compromised than the 3, more compact and affordable, yet scarcely less desirable than the 7. It also underlined that the Vierzylinder could go toe to toe with Mercedes and match them both in stylistic and engineering terms. Production lasted until 1996, with over 1,300,000 E34’s produced, mostly at BMW’s Dingolfing plant.

The right car at the right moment, the E34 refined the mid-sized BMW offering to a class-leading pitch. So much so that today’s evolution of 5-er plays second-fiddle to nobody. Yet as competent and class-leading as the current trinket-laden G30 may be, it’s difficult to escape the notion that the 5-Series has lost its way. As E34’s defining characteristics continue to cast the deepest of shadows, surely the time is ripe for a truly neue Five?