Alfa Romeo stared success in the face with 2003’s Kamal crossover concept, but opted to pursue MINI instead. Was this Fiat Auto’s worst product planning decision ever?

Product will only get you so far in the auto business, but it certainly does help. It helps a great deal more when it is the right product, preferably at an opportune time. Successful product planning is a subtle art and a rock many a car company have stumbled messily upon, for exact science it is not.

In the immediate post-Millennium period, Alfa Romeo was in serious financial trouble, losing millions of Euros a day, despite having perhaps its most cohesive lineup in generations. There was something rotten, not simply in the state of Lombardy, but further afield and to a far greater extent over in Piedmont.

Despite its woes, at the 73rd Geneva motor show in 2003, Alfa Romeo displayed Kamal, a concept for a crossover 4×4. Translated from Sanskrit, ‘Kamal’ allegedly denotes the colour red. In Arabic, a similar term is said to mean ‘perfection’ or the ‘synthesis of opposites’. Whichever meaning one chooses to ascribe, this was not simply a whimsical piece of blue sky thinking, but a plausibly realised proposal for what looked for a time at least like being the prelude to a production model.

Utilising a version of the GM / Fiat platform intended for the 2004 939-series 159, Kamal also shared its suspensions and Q4 all-wheel drive system. Powered by a 3.2 litre version of the GM-sourced V6 power unit and was mated to a Selespeed automated manual transmission. 4.35 m long, 1.86 m wide and 1.62 high, the Kamal’s offer was more road-focused than that of, say, the previous year’s sector-defining Porsche Cayenne.

Styling was courtesy of Alfa’s centro stile under Wolfgang Egger, although it’s tempting to imagine there was some assistance from the Torinese carrozzeri – after all, there usually was. Visually, Kamal successfully synthesised both traditional and contemporary Alfa styling elements with a form language befitting that of an off-road capable vehicle.

The sheer bodysides were visually softened by the pronounced curvature and sculpting of the surfaces, minimising the sense of this being a tall vehicle, an effect which is aided by shaping of the DLO and roofline, giving the Kamal a dynamism lacking in other such contemporary designs. Only the nose styling made overt reference to traditional elements, echoing the treatment of the previous year’s 8C Competizione concept and the 955-series MiTo – albeit, handled far more satisfactorally here. 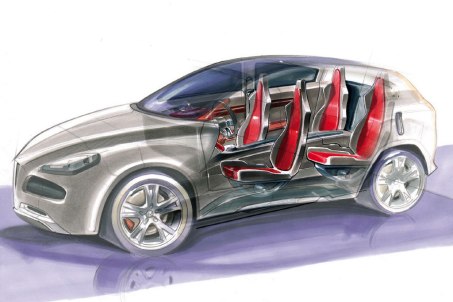 Conceptually speaking at least, Kamal (which sounded more akin to something Maserati would choose for a name) wasn’t a million miles away from the contemporary Kubang concept which Giugiaro prepared for the Modenese atelier, first shown some months earlier. Given that Giorgetto was already working on a series of production cars for the Biscione, it might not be wildly implausible to imagine he had some input to its shape.

But like the Maserati proposal, Kamal mouldered in the pending tray, while the centre of gravity shifted away from the type of vehicles the Fiat Auto group persisted in making. But with Fiat finances in such a parlous state, any unproven product actions were likely to have been subject to the most forensic scrutiny. Certainly, the crossover case was far from proven at the time, but it was clear that as a market, it was a growing one.

Nevertheless, Alfa’s Daniele Bandiera saw fit to commit funding to the low-volume 8C Competizione and more damningly, the MiTo supermini, neither of which would do anything for Alfa Romeo’s bottom line. Whether the ultimate responsibility lies with Bandiera, Fiat Auto chief, Herbert Demel or elsewhere, it’s obvious (with the generous benefit of hindsight) that the wrong product decisions were taken.

What a production model based upon the Kamal could have done for Alfa Romeo’s sales and profitability can only be guessed at, and that’s before we even mention the prospect of an inceptive presence in a sector which continues to grow exponentially – one Alfa Romeo have only very recently entered. And with the Stelvio struggling to make any meaningful mark on a now saturated market, this could well be the biggest Fiat Auto product-related howler of all.

While it is of course futile to examine the actions of individual umbrella marques without considering the slow-mo implosion of the parent company, one is left impotently grinding one’s molars at the scale of missed opportunities. One could argue that Alfa Romeo simply wasn’t ready for such a profound cultural shift, but fifteen years later, it is one that has been forced upon them and the results are by present reckoning, a good way short of adequacy.

Alfa Romeo chose the Kamal name to illustrate how two opposing cultures could successfully be melded into a cohesive whole. What the intervening years have illustrated however is that for the Biscione, the twin imperatives of profitability and product credibility have yet to be reconciled. One wonders if they ever will.