For every alleged innovation there is always a precedent. Come now, you hardly imagine the Gorden comes up with this stuff on his own, do you?

When Daimler’s Chief Design Officer, Gorden Wagener turned up in his immaculate sport-casual attire for the debut of the Maybach Ultimate Luxury concept, he told assembled journalists it represented “a totally new archetype of kind never seen before.” Of course even the most empty phrases contain a grain of truth because in the manner of a stopped clock, he’s half right.

It’s entirely possible that Daimler’s CDO neither knows nor cares that his verbiage-laden uttering lacked much by way of substance. After all, Mercedes’ resident believer in beauty and intelligence is unlikely to have much time or emotional bandwith for history or the lessons thereof, largely because both he and his Sindelfingen minions are far too busy erasing it.

As any engineer or designer worth their magic marker will tell you, there is nothing truly new in the world. In 1979, the perennially struggling American Motor Corporation launched the AMC Eagle, a range of cars which could well lay claim to being the first genuine car-based crossover.

The Eagle is interesting in a number of ways, not simply in underlining that necessity really is sire of invention. Because, say what you will about the now-defunct Kenosha-based carmaker, AMC certainly was inventive. After all, they had to be.

In 1970, AMC introduced the Hornet, a range of compact saloons aimed squarely at the mid-market. Offering few surprises and a resolutely conventional mechanical specification, the Hornet’s neatly executed styling was orchestrated by Richard A. Teague, conceivably America’s equivalent to BL’s Harris Mann, both in terms of genuine talent and misplaced opprobrium.

In 1977, the Hornet gave way to the restyled Concord model, although not before also lending its platform architecture to both the subcompact Gremlin and Pacer models, neither of whom require much introduction. Around this time, AMC’s engineering chief, Roy Lunn examined the concept of a unitary-bodied car with full time offroad capability, which could be offered in the context of the impending downsizing ethos gripping the US car industry.

With Jeep sales hit hard by a series of fuel crises, combining the Concord bodyshell with a permanent four wheel drivetrain and suitably bolstered underpinnings led to the creation of the Eagle programme.

As a piece of inexpensive on the hoof product planning, it was rather smart, even if it wasn’t particularly fresh looking or in saloon form, terribly attractive. Available in a frankly bewildering array of bodystyles, which included 2 and 4-door saloons, an estate, a fastback coupé, a kammback subcompact and even a convertible, nobody could quibble at AMC’s intended reach.

Establishing a ready market within the snow-belt of North America and with close to 200,000 made (overwhelmingly estates), until its demise in 1987, it’s a little cheap to sneer at AMC’s offering, particularly in the light of its prescience and fitness for purpose.

Spool forward to the Millennium and within the Lincoln-Mercury design studios, styling chief Gerry McGovern was excavating the dusty reaches of brand-Lincoln, creating a series of creditable concepts which reached its apogee with the much-lauded 2001 Continental. Two years later the Navicross was shown, a compact symbiosis of saloon and crossover, redolent of a more polished version of AMC’s ’80s pathfinder. 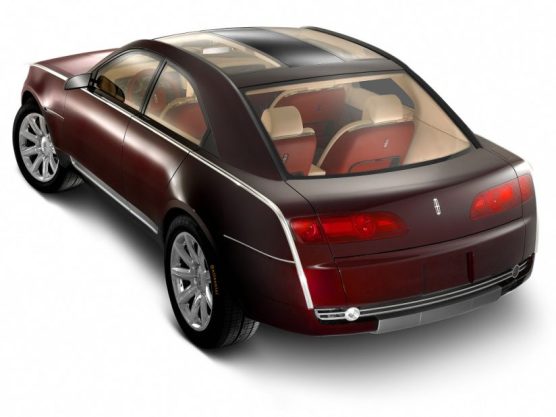 Utilising similar highly disciplined and fine detailed form and surfacing to previous McGovern helmed Lincoln concepts, what Navicross suggested was perhaps not best expressed in a raised height, pseudo-offroader. Certainly, Lincoln’s Dearborn masters didn’t see the merit in either the concept as presented or indeed the rather fine conventional saloon it might have spawned. Bullet swerved or myopic blunder? You decide.

But it’s impossible to keep some ideas down. Having witnessed the success of Subaru and Audi in establishing a market for wagon-based mild crossovers, Volvo entered the fray in 2015, offering the high-riding, S60-in-Berghaus Cross Country in both saloon and estate form. It won’t surprise anyone to learn it failed to ignite the market, the saloon being ignominiously withdrawn the following year with a mere handful sold.

It’s entirely possible of course that Mercedes or its brougham-brand Maybach offshoot is the marque to make the saloon / crossover breakthrough, but it’s unlikely. Largely because history teaches us there’s a fundamental flaw in the notion of a high riding three volume saloon, one which pops the bubble on the whole great outdoors image.

While an estate or hatchback format lends itself to outdoor activities such as surfing, skiing or mountain biking; the kind of leisure activity we’d like the look of ourselves being involved with, the three volume equivalent of outdoor pursuit tends to be carried out on golf links.

Fundamentally then, the three volume crossover is a marketing oxymoron and Mercedes-Benz is far too canny / risk averse (delete as appropriate) to try it, especially when it can sell every oversized hatchback it makes.

But while we are unlikely to see the Vision Mercedes-Maybach Ultimate Luxury concept enter production, at least in three volume form, we’re equally unlikely to be spared much of its stylistic excess. Mr. Wagener isn’t minded to loosen the thumbscrews anytime soon.