Sometimes my academic work overlaps with the kind of thing we do here at Driven to write. At the moment, I am immersed (again) in Gestalt Theory.

This is not the first time I have handled this topic. In January 2015 (happy days!) I used Gestalt theory to discuss why the 1993 Citroen Xantia’s graphics failed to be seen as the designer intended. This time the cases are not examples of failure but show how Gestalt theory can explain what is happening in the world of headlamp fashion trends style stuff.

It took me a while to identify what the theme was with the lamps I’ve photographed later on in the article. We´ll get to that in mere moments.

First, let’s re-re-appraise ourselves of what Gestalt theory is. The ideas were put forward in 1912 by the German psychologists Max Wertheimer, Kurt Koffka and Wolfgang Köhler. Simply put the idea is that the visual cognition system in a human brain tends to interpret visual stimuli in the simplest possible terms. There are several laws describing aspects of this phenomenon.

The laws all makes sense if you imagine the example of what rules you would write to tell a robot to identify a moving target: visually isolate the moving thing in a complex back-ground and find out which way it is moving. The same principles are the ones you would use to see a moving bull in a field and avoid it if it was running at you – you just don’t realise this because they are not conscious processes. They run all the time and only sometimes do anomalies draw our attention to them.

We are discussing cars so today I will show a classic headlamp and some recent designs that seem to rely on the law of continuity for their effect, which is to overcome the figure-ground law.

The usual way to do a headlamp is to treat it as a hole (the “figure”) in the bodywork (the “ground”) and have the geometry inside independent of the surrounding surfaces. Here is the good old Fiat 500 as an example:

The structures inside the lamp are circular and complete unto themselves. The bonnet-body shutline runs from the front to the lamp and then carries on around the lamp’s perimeter and then scurries rearward to the window.

Note here that the law of contintuity is being respected because the two straightish shutlines seem to be optically related.

Why did I not mark it up like this (below)? I did not mark it up as above because the boundary between the body and the lamp belongs to the lamp. It is a figure on a ground. We see things like this all the time. A black dog sitting on a white carpet is not seen as a black hole on the floor**. The “edge” or boundary belongs to the dog. Similarly, we intuitively read the edge here as belonging to the lamp.

Now let’s look at a more daring use of the law of continuity to make a car seem wider and to more strongly integrate the lamp into the front graphics.

The car is already pretty wide but the flow of the grille louvres into the lamp accentuates the effect. This feature also makes use of the idea that adding stripes makes something look longer in the dimension parallel to the stripes:

With that in mind look at the marked up lines in the Passat again (below). And so the figure-ground relation alters, depending on which way you understand the shapes. Why did VW do this? Possibly because there were not so many ways to make a free-standing lamp seem distinctive.

So, the formal innovation here is to graphically break into the lamps’ area and to rely on the law of continuity to overcome the figure-ground rule. Thus instead of the lamps stopping the grille, they are united as one graphic area.

The lamps and grille area are now one entity (a figure) on the ground of the sheet metal: 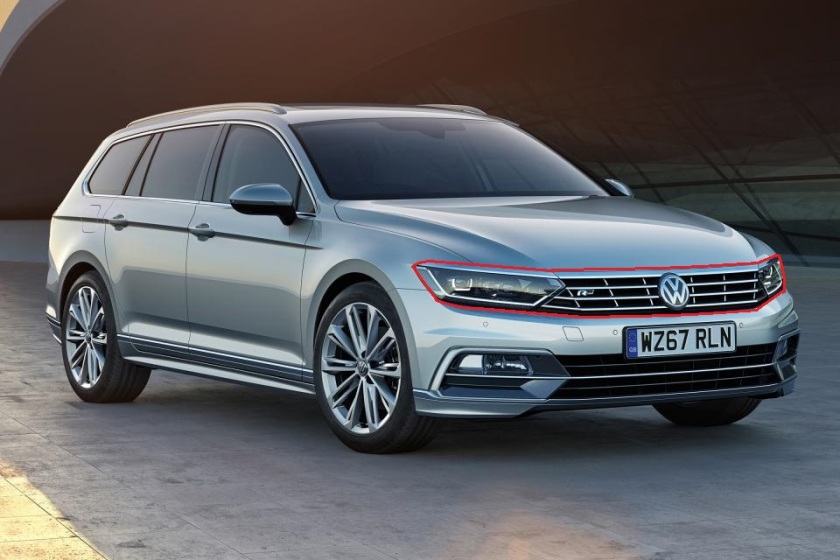 How new is this idea? We have come back full circle:

So, that is what VW has done with the Passat (and the Polo and the Golf). Once a good idea is spotted it quickly gets adopted:

11 thoughts on “The Year Before Monday”