A soft day for a first sighting. The lesser-spotted i30 Fastback appraised. 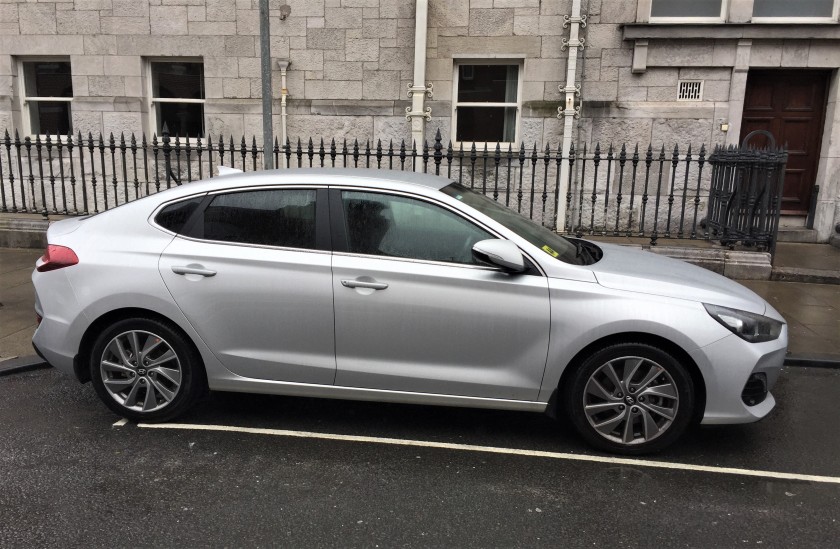 While the remainder of Europe dessicates amidst the most protracted heatwave of recent times, here at that question mark of a landmass at the Atlantic’s cusp, a more habitual form of summer has returned. Leaden skies, horizontal mist and high humidity.

But you didn’t come here to obtain a weather report – there are better places for that sort of thing. But it does go some way to explain the ambient conditions for today’s set of photos, taken in the fine city of Cork, itself no stranger to regular and persistent precipitation.

About a year ago, we reported on the announcement of the Hyundai i30 Fastback, a more rakish, coupé-esque variant of the i30 hatchback. Not that the regular i30 is anything but screamingly normative in a sector which is defined by its utter torpidity, but as we pointed out at the time, it’s nonetheless a welcome development on the Korean carmaker’s part to offer something more, how shall we say? Urbane?

Today however, amid the summer rain, I received my first sighting of an i30 Fastback in the wild, if indeed the Western end of Cork’s city centre can be characterised as such. It’s a strikingly handsome car, I have to admit; more so than photos (my rather paltry attempts) and other, more professional essays might have suggested.

Because if the ‘cooking’ i30 puts the stable genius of Sindelfingen’s current works into the sharpest and most unflattering of reliefs, the fastback positively stomps on the Neu-A’s spectacles, simply for dramatic effect.

Frankly, this is (unsightly bonnet shutline aside) one very accomplished design – one which wouldn’t have looked out of place in the line-up of any German so-called premium stable, had they not stampeded as one towards the baroque lounge.

The irony of course is that none of the German marques, premium or otherwise, design cars as calm and clean-limbed as this now. Parked up a few metres away ironically, was a new-generation Polo and the difference (and inferiority) in approach was almost embarrassingly palpable.

“I Care About Lines” says Hyundai’s marketing blurb for the i30 Fastback and frankly, looking at one parked in natural (if somewhat diffused) light, one can more or less concur.

Hyundai’s designers, under the assured leadership of Peter Schreyer clearly do. Their German counterparts however by comparison, (and the place where Schreyer cut his stylistic teeth in particular), quite clearly do not.