Today we have a Twix of an article, a consideration of recent offerings from DS and BMW, with a side-order of architectural musing.

At the risk of being pretentious, these designs ask one to reflect on what Farshid Moussavi discusses as the function of style (in relation to buildings, but it is true of design generally).

“What is style? Whether used to identify an individual architect’s oeuvre, or to indicate some common features in a place or a period, “style” has historically been the word employed. Embedded within this usage,” writes Moussavi “are several dubious and conflicting assumptions. Firstly that style consists in the repetition of formal elements. Second that style is the product of an individual personality. Thirdly, that style relates to something larger and less tangible than the actual buildings that embody it.”

The 1970s cars are here to provoke despair about where we have ended up.  Both vehicles offer a distinctive vision. Let us, though, get back to considering the function of styling.

Styling is not about sameness but about distinction – and when we consider how few are simple approaches to visual distinction we realise that the alternatives are reliant on complexity.  The DS3 Crossback and BMW Vision iNext find themselves in much the same old boat: busy.

On a car there are no elements that are repeated so style is about the use of common shapes on various elements: the radius and the type of curve that are deployed to join the main points defining the volume.

There isn’t much intellectual autonomy at play in the busy end of the styling spectrum. Styling itself is not a matter of intellectual freedom on the part of the stylists so don’t imagine the createurs of these cars are acting in a context with many degrees of freedom.

Representation applies more to architecture than to car design yet elements of the car relate, albeit weakly, to representation of ideas: performance, power, opulence, individuality or simply to express the novelty of the some other aspect. There is no such thing as zeitgeist. The car does not represent anything like the era it is from. The opposite is true, that the era is made up of the styles that prevailed.

In Style in the Technical and Tectonic Arts; or, Practical Aesthetics the German architect Semper argued that styles emerged in themes derived from the techniques of fabrication. Semper argued that style was the artistic treatment of the fundamental idea in the work of art.” The “fundamental ideas” in this case are the elements making up the cars: they could be functionally defined elements or geometrical elements.

I call this emergence of themes “elaboration” where the functional item is given an acceptable shape in the first instance and then, over time, it evolves and can almost become an abstraction.

All this mentation is related to two quite lovely designs. One of them we have just discussed and one is quite new to these pages. Here is the side of the DS that Eoin Doyle treated recently: 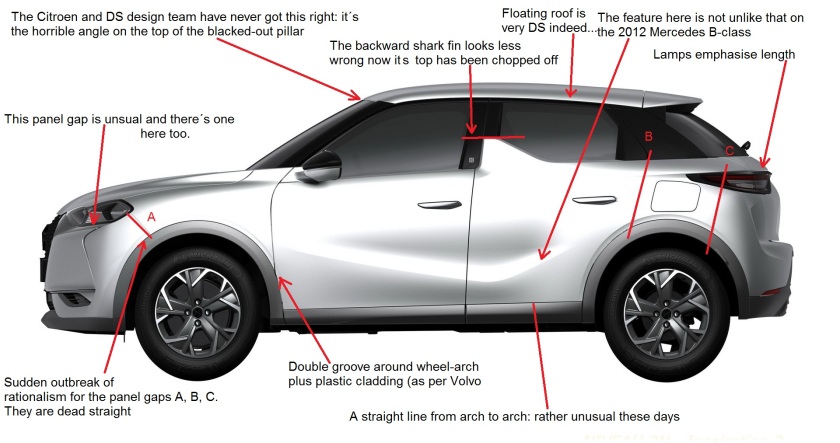 And turning to the front, there is strangely not so much to get one’s teeth into. Despite all the features, there is no underlying principle guiding this. It’s like a goat with the bones removed.

At the back DS have deployed a few features and none are original.

The rear view is the calmest of the three yet still spoiled by what I assume to be false exhausts and false vents. If the exhausts are functional it still seems like an excessively sporty signal for what is not a sporting machine. Readers can help me remember where the rear lamp treatment is from. I want to say Jaguar.

The line from the trailing edge of the fin runs in a very orderly way around the base of the side-glass and around the rear of the car. It’s almost disciplined. And there is a hint of discipline in some of the panel gaps (see the side view).

What is worst about this car is that it is not even strikingly bad. It puts me in mind of the nondescript busy-ness of a late 70s US-market Chrysler. That firm reacted to others and had no inherent identity so it relied on a horde of unrelated styling features.

With that one out of the way, we turn again to another example of elaboration, this time from BMW. Lo! 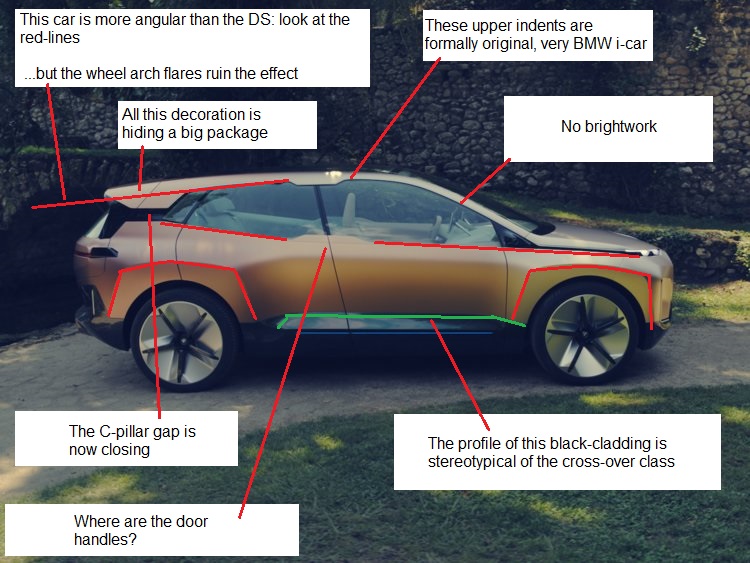 The biggest fault with the front is that BMWs designers have made a mistake with the fundamental topology of the BMW kidney grille. They have treated it as an infinitely flexible abstraction. It is not infinitely flexible. There is a limit to what you can do a geometrical form before it becomes another, different-in-principle form.

The Gestalt Law of continuity and closure can not make the missing vertical bar join up. That is why the grille looks like a huge hole with an upper and lower tab (like a Kia) – a point someone has already noticed. They did not have to do that.

You can see already that the BMW is calmer than the DS. That still isn’t calm enough. The missing vertical bar abuses the BMW grille tradition; the half-formed rectangle of the L-lamps and the surface it sits on do not gel with the form of the wheel arch feature line.

Looking at the two cars together, both are exemplifying the function of style and what goes wrong when designers compelled to add complexity. In isolation, the BMW comes off as the better of the two cars. The DS lacks the (little) discipline the BMW has; it is, at least, showing evidence of internal consistency. Most people will not get past the infelicitous grille.

If some of the features of the BMW were edited, there is a fine estate car lurking in the BMW concept. If the DS had its features edited there would merely be fewer features.

37 thoughts on “Here’s Your Samarra, The Tinders And Brush Await You”