The sight of a Maestro parked outside a churchyard in a small English village might once have been as common as the prayer books the car’s putative churchwarden owner would distribute amongst the darkening pews, yet here in September of 2018, it strikes a rather more rarefied note.

It’s rather lazy of this writer to apportion ownership to a servant of the church, yet it’s precisely the type of vehicle a TV producer (of, say an Inspector Morse or Midsomer Murder) would select as visual metaphor for the meek and stoically put-upon, down to its penitential ‘Clubman’ trim, devoid of the equipment and visual niceties of its more brazen sibling models.

Which in its own way, could also be said to have summed up the hapless Maestro itself – a car which always seemed to be in the process of self-consciously edging itself out of frame. A car which like its fictitious owner, was uncomfortable in the flashbulb’s glare; devoted to service, content to mortify itself for a higher end.

The Maestro has its detractors, both in visual and ownership terms, and one might not call it accomplished in either sphere – not without biting firmly into one’s cheek while doing so anyway. Yet the sighting of this well-preserved, late-era example exuded sufficient allure to cause this author to pause his bike ride in order to document this (holy) relic for your sabbath observations. 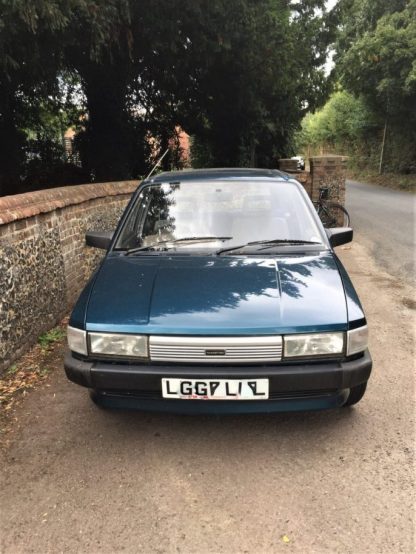 By turns ungainly and ill-proportioned, it’s an archetypal ‘almost’ car. Yet shorn of the more upmarket models’ body colour bumpers, brightwork and other addenda, the car’s shape can speak more plainly across the generations, offering us perhaps a glimpse of the car it would have been in the late 1970s had BL not sat upon it for half a decade, before wantonly tarting it up for our belated delectation.

Half-buried within LM10 lies a decent rationalist ‘product design’ car, a la Ritmo or indeed BL’s own SD-1 Rover. Some tweakage of the proportions, some better attention to the radii of the pressings (which in their current form lend the car a rather insubstantial appearance), a better wrought (and designed dashboard) and more attention to detail design could have made all the difference. As indeed would the deletion of all the silly gimmicks BL lashed on to distract from what was, by 1983, a rather dated shape.

It is of course, pointless to imagine alternate realities – we only get one shot in life before commencing our lengthier sojourn below ground. The Maestro missed the mark and that really ought to be that. But it’s ungracious of us to speak ill of the dead, so if we cannot allow the hymns of praise to issue from our lips, let us instead silence them.

27 thoughts on “Songs of Praise”