Today we turn our attention to the 2017 Nissan Micra. This offers us a chance to learn the Nissan project code for the car, K-14.

We also get to canter through a potted history of a car that has lurched from banal to brave and back, like a drunken tide. The current car has a touch of brave and also a few dollops of busy. Before we get to that we shall begin with the 1982-1992 Micra, one of the banal ones.

The design followed the contemporary trend for flat surfaces and quite straight lines. Much of General Motors N. American cars adopted a similar conceit, driven by a need to express careful rationalism by the avoidance of very much by way of expressive elements.

The resultant car comes very close to achieving the goal of being apparently undesigned, a generic shape, where “design” means positively styled. The 1983 Uno comes closest in terms of its austerity. In comparison the 1981 VW Polo could be called almost flamboyant:

The Micra has had long model cycles. The follow-up Micra (K-11) lasted another decade, from 1992 t0 2002 and very much leaned in the direction of expression and overt styling but with an iron backbone of discipline.

It might not seem that way today, but that is a clearly styled vehicle which had a consistently applied character applied at all levels, tying it visually to the top-of-the-range Maxima of the day and also allowing it to stand out from its competitors without being overtly strange. The image shows a later version with its post-modern rub-strips on the flanks. The original version had a single bar running front to back.

Compare with the 1990 Renault Clio:

Both the Micra and Corsa have similarly large radii; the Micra demonstrates greater rigour in its execution than either the Clio or the Corsa. That mirror sail panel blights the Corsa. The Corsa’s surfaces are also busier than the Micra.

The Fiat Punto of 1993 probably matches the Micra for consistency, character and originality.

In 2002 the K-12 iteration appeared, for a change building somewhat on the theme established by the predecessor, the pronounced step between the glass house and the body:

The Micra’s peer, the Yaris showed that reasonably courageous design could be accepted by customers of this price class.

The K-12 is interesting because it is formally quite a strong theme, one dependent on one keeping in mind the functional difference between the body and the glass-house and being willing to accept the articulation of that difference. The grille is divided strongly in two and contrasts in a marked fashion with the large, bug-eyed lamps. The grille’s form is angular in a landscape of roundness, anchored by the panel-gaps of the wing to bonnet and bonnet to front bumper.

For 2010 Nissan retreated from formal innovation and deep thinking to produce the K13 (easy to remember that one, I think). The form is neither evolutionary nor revolutionary, more a step back into conformity:

The Clio II demonstrated a similar vagueness. Here is a part of one:

The 2006 Corsa showed a sweet balance of style and functionality and also indicated the direction towards strong sculpting of the flanks that predominated in subsequent years:

And the class leader, the Fiesta upped the intensity of the sculpting with the 2009 version:

And this sets the scene for a very emphatic return to flamboyance and expression chez Nissan: The front looks like this:

The most significant detail is the adoption of the interrupted C-pillar, which is a feature that must be nearing the end of its run.

And so we arrive at the conclusion, a little visual analysis of the current car:

The blacked-out, pseudo-glazed C-pillar and the remaining shark fin is the car’s strongest graphical element, there for the same reason an almost identical feature is found on the current Opel Astra. It makes the car seem longer and lower and ties it to the corporate look pioneered on the US market Maxima.

The second slide show demonstrates what a plainer version looks like. The dark colour area on the original is extended by means of a large mirror sail panel created by the cab-forward profile. With car profiles now having arrived at or near unity the graphics and side sculpting must carry much of the burden of establishing identity. 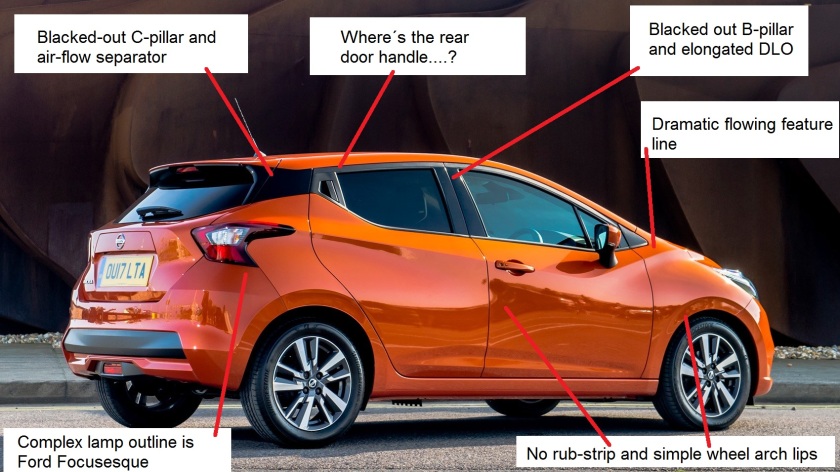 Below the DLO there is a softly undulating deep flank, with no rub-strips. This car has high sides which is probably awful for the children to be trapped inside its dark interior. The rear lamps adopt the busy-ness of the outgoing Ford Focus and the need to tie-in with the bumper panel gap creates a sharp point where a radius is asked for. See also: Peugeot 307.

This analysis reveals a car with soft main forms, angular graphics and some unusually developed feature lines. The swage line running from the lamps around A-pillar continues a trope begun by Kia some time ago:

But on the Kia the feature stays below the headlamps.

In summary, the new Micra is bold and aggressive where the last one exuded soft, friendly blandness. Like many current designs it has not got a clear high concept, being more like a blend of styling features placed on a passive and very secondary set of main surfaces.

22 thoughts on “The Factory’s Shadow Over Oporto”