Before the revolution came this final flowering of traditional BMW expression. It’s possible they never quite surpassed it.

As BMW themselves fondly state, the Three-Series represents the beating heart of the Bayerische Motoren Werke brand, and as such, they have (until comparatively recently at least) managed its evolution with some caution and no little care. Certainly throughout its earlier iterations, it remained a conceptually faithful evolution of the ur-Dreier, the epochal 02-Series, which the E21 Three supplanted some 42 years ago.

Careful and considered change had been Vierzylinder watchwords for a great deal of the Three-Series’ career – up to a point at least. Perhaps the most notable break with tradition taking place with 1990’s E36 model; the adoption of the Z1’s multi-link ‘Z-axle’ rear suspension marking the end of BMW’s former fealty to the frequently treacherous semi-trailing arm layout, while its pronounced aerodynamic wedge profile saw the 3-er embody an entirely new aesthetic form.

But while the E36 was largely well received, it lacked the hewn from solid integrity of its forebears and with early cars featuring ugly, cheap-looking grey plastic bumpers, shoddy wheeltrims, and a distinctly downmarket interior, the Three-Series’ reputation as a quality product took something of a dive.

Given that the Dreier in any of its many iterations was never a ravishing beauty, its true appeal lay in a combination of carefully measured visual rectitude and almost obsessional level of material and build integrity. Shorn of these distinguishing qualities, the Three-Series risked losing its exalted position, despite all its dynamic plaudits.

Schemed under the patrician nose of research and development chief, Wolfgang Reitzle and lead by engineering director, Wolfgang Ziebart, E46 was intended to evolve the existing car both technically and stylistically, but more importantly to undo the reputational harm E36 had occasioned, dramatically improving both refinement and perceived quality.

Technically then, E46 carried over a good deal of the E36’s hardware, but the new car employed a stiffer bodyshell and a greater proportion of aluminium in its suspension components to pare unsprung weight. Efforts too were made to improve the car’s weight distribution. Engines were the usual Petuelring mix of in-line fours and suave sixes, with three diesel options, again in four or six cylinder applications; the model being notable for perhaps being the last Three-Series model where petrol powerplants were accorded greater prominence than diesel. 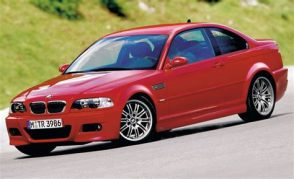 The E46 design team was lead by Briton, Ian Cameron, reporting to newly appointed design director, Chris Bangle. The exterior design was to be a more muscular, yet refined variation of themes established by Boyke Boyer’s E36, and is attributed to Erik Goplen, based at the Designworks studio. However, early proposals failed to meet Dr. Reitzle’s exacting standards, the patrician development supremo dressing down his upstart American design director with the words, “I was promised champagne, but you have offered me water!”

Champagne was duly served and there is little doubt that E46, whether in saloon, coupé, estate or cabriolet form was a very fine vintage. Indeed to this day, it remains a supreme expression of traditional BMW aesthetic values. In fact, to many aficionado’s eyes (and a good many more objective observers) it simply hasn’t been bettered. The equally fine interior is attributed to Alex Klatt, working under the supervision of longstanding BMW interior design chief, Mike Nicic.

While criticised in some quarters as being less of a driver’s car than its predecessor, the ’46 raised the 3-er to new levels of sophistication, yet unlike its forebear, both looked and felt like a quality item. It also brought driver assistance technology like traction and braking control to the sector, a function of its advanced multiplex CAN Bus electronic system.

The E46 marked a confident return to form, so much so, that it probably stands as the most complete of the Three-Series generations – the most accomplished, and perhaps the most polished. Its combination of virtues continues to embody the sports-saloon template, much to the chagrin (it seems) of the incumbent holder of Dr. Reitzle’s exalted position.

Chris Bangle once told a journalist he hoped nobody would notice his influence upon BMW’s styling. This being so, one is tempted to propose the E46 as the most successful BMW design created during his watch. It illustrated that with a firm guiding hand, the iconoclastic American could deliver a car which cleaved faithfully (and fruitfully) to BMW traditions.

It’s somewhat telling that once Reitzle departed the Forschungs und Innovationszentrum for the bright lights of London and Ford’s Premier Automotive Group the following year, any moderating influence upon BMW’s maverick design director allegedly departed with him.

One of the most successful contemporary BMWs, there’s little surprise that not only is it still to be found in quite astonishing numbers on our roads, but that its iconography continues to be embedded in the hearts and minds of the marque faithful. E46 then, not only speaks eloquently of the inherent virtue in conservative values, but perhaps as a warning of what can occur when they are summarily discarded.

The stylistic revolution overseen at BMW by Chris Bangle was invigorating, and perhaps in part, necessary. Whether the Bayerische Motoren Werke would have arrived at their current dismaying destination without its contribution will remain a matter of conjecture, but it’s increasingly apparent that something fundamental has been lost in the wholesale rejection of past values.