It’s possible to argue that by 1976 the world of car design had attained peak-wedge, exemplified by William Towns’ startling Aston Martin Lagonda. The projectile-shaped luxury saloon so defined the dart theme, there was really nowhere else it could be taken, not that this prevented the likes of Marcello Gandini and others within the design community from trying. However, as evidenced by subsequent efforts, the returns were rapidly diminishing.

But while change was in the offing, the 1977 Geneva motor show was business as usual, with Ford-owned carrozzeria Ghia displaying a striking wedge-shaped saloon, dubbed Megastar. Created to explore ideas around form language for a new generation of more aerodynamic, fuel efficient sedans, Megastar married a two-volume, pronounced wedge silhouette with distinctively generous side glazing, pronounced graphics and a sharply truncated rear.

Beneath the low, penetrating nose sat the running gear from a contemporary Ford Granada, which must have been something of a packaging miracle in itself. But it was treatment of the concept’s centre section which elicited the most startled gasps from the assembled throngs. 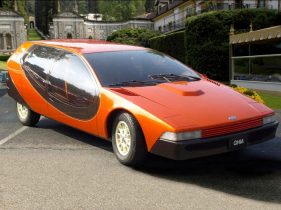 Megastar’s DLO was also wedge shaped, but in voluptuously rounded fashion, which provided a vast glazed area, accentuated by a contrasting body-coloured band which encircled it. By remarkable prescience, the manner in which the DLO rose sharply towards the C-pillar and encapsulated the rear extractor vent could be seen as a template for every modern-day two-volume hatchback.

A sympathetic feature line running parallel from the leading edge of the roof to sill level, harmonised with the DLO and (latterly) finished in the same contrasting shade served to de-accentuate the bulk of the body-side at the rear three quarters. There are reflections here too of Pininfarina’s 1971 RO80 concept, especially in the side-graphic treatments.

While opinion was divided over the merits of the design, it certainly created no shortage of discussion, but meanwhile on the Porsche stand, the death knell to the wedge was making its production debut. Zuffenhausen’s 928, with its soft, rounded forms and clean, almost pebble-like shape would prefigure the future.

But Ghia’s Fillipo Sapino wasn’t swayed, preparing a second Megastar concept the following year. Megastar II was a shorter car, based on Taunus/Cortina running gear and a two door fastback outline. Reprising the unusual rounded wedge-shaped side graphic, it came with a more production-focused and somewhat half-hearted aesthetic.

Resembling what to contemporary eyes could be best described as something of a cross between a Renault Fuego (nose) and a Citroën AX (tail), the one thing Megastar II cannot be accused of is lacking influence. But for both it and its forebear their stylistic stars were in the descendant and within two years, both Ghia and their Köln-Merkenich masters had arrived at a decisive and significantly altered form language.

From a CTCHBC perspective, it’s perhaps debatable how much either car would have been worthy of Quai de Javel’s chevrons – although it’s entirely possible to build a case for Megastar I, with a little tweakage, becoming a convincing alternative to Bertone’s successful BX design theme. As it stands, one is left wondering if Citroën’s Geoff Matthews didn’t take some inspiration from Ghia’s concept for the 1986 Eole?

Meanwhile at Turin, Sapino hadn’t quite got the homages to Quai de Javel or Vélizy entirely out of his system, as evidenced by his studio’s 1983 effort. But that’s another story.

More cars that could have been Citroëns.