Driven to Write profiles a refugee who made it in the new World.

During the early 1970s, it appeared as though Toyo Kogyo’s Mazda division had stolen something of a march on the auto industry. Alongside Germany’s NSU, Mazda invested heavily into wankel engine development and while Neckersulm’s all-in commitment saw them over-reach themselves with 1967’s stellar RO80, Mazda’s more calibrated approach appeared for a time to pay dividends – especially in the United States.

Chief among the advantages of rotary was its low NOx emissions, a matter which perhaps offset its excessive hydrocarbon output. And as US pollution laws began tightening, especially in California, rotary looked like being the industry-wide solution – especially while oil prices remained low.

Unlike their German counterparts (apart from a toe in the water halo-car in the comely form of 1967’s Cosmo), Mazda’s rotary-engined offerings were simply variants of existing saloons, coupés – even pick-ups and estate cars, a matter which no doubt aided Toyo Kogyo’s cause.

The 1973 oil embargo changed many things, not least the industry’s direction of travel. As a panic-stricken auto business took stock of the gaping abyss that had opened at their feet, the industry-wide interest and investment into rotary was hurriedly diverted into lowering fuel consumption via existing technology.

The oil shock hit Mazda hard and by mid-decade Toyo Kogyo was staring bankruptcy in the face. Yet despite this, Mazda kept faith, and having convinced backers at Japan’s Sumitomo Bank of the logic in continuing rotary engine development, Mazda’s engineers largely solved the unit’s chronic rotor-sealing issues.

Mazda’s sales recovery came to some extent on the back of the 1977 323 Familia model, which became a Global sales success. This conventionally engineered hatchback line, alongside Mazda’s respected light commercial range not only transformed their fortunes, but would be sufficient for Ford to take the first of several equity stakes in the Toyo Kogyo business in 1979, culminating in a 33% stake by the mid-’90s.

Initiated as project 605 in 1970, but like so many model programmes of the era, delayed by the turmoil of 1973, elements of the 323 platform were believed to have been adopted to form the basis of a compact rotary-engined 2+2. Launched in 1978, the Savanna RX-7 saw Mazda enter a market Nissan was in the process of abandoning as their Z-series sports model became an increasingly bloated and upmarket GT. 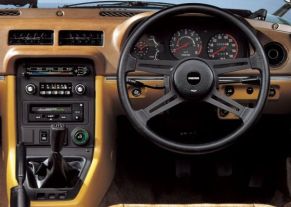 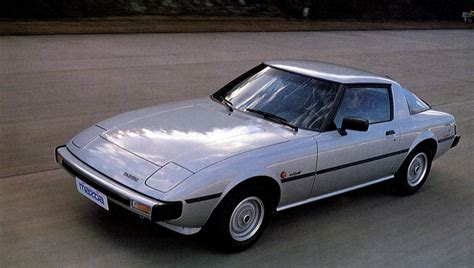 Employing the same basic 12A twin-rotor engine as the outgoing RX-2 model, the powerplant was heavily modified to improve gas sealing, wear rates and engine longevity. Mounted in what Mazda described as a ‘front-midships’ position within the wheelbase, the 573cc per rotor cell unit was mated to a unique five-speed manual, or a three speed automatic transmission made by Jatco, a consortium involving Ford, Toyo Kogyo and Nissan.

Suspension was by MacPherson struts, while a well located live axle was employed at the rear using four radius arms and a lateral Watts link. Anti-roll bars were fitted at both ends, and Kayaba gas-filled dampers were mounted at the rear. Disc brakes were specified all round, and while a rack and pinion system was considered, the steering was by a more Familia’ recirculating ball arrangement with 3.7 turns between locks.

The initial design brief called for ‘functional styling’ and was carried out by Mazda’s own design team in Hiroshima. Clean limbed, sleek and largely uncluttered, the shape (with a cd of 0.36) however risked allegations of blandness. Originally intended to be a one-piece affair, the lifting centre section of the glazed rear canopy was allegedly adopted for cost reasons. At the time, the RX-7’s style was compared unfavourably with the visually similar Porsche 924, but in retrospect it is debatable which of the pair has dated best.

With a low centre of gravity, a high roll axis and a 51/49 per cent front to rear weight distribution, RX-7 dynamics were well regarded, with perhaps a slightly more US-centric balance between comfort and outright handling prowess. But with a lighter front end than its front-engined rivals, excellent stability and fine balance, the Mazda proved a creditable and entertaining proposition.

With almost 475,000 of the first series RX-7 built, it proved a notable success for Mazda, both in commercial terms and in justifying ongoing investment into the rotary powerplant. Combining attractive looks, fine handling, a spacious, well planned cabin and a turbine-smooth, free-revving (if rather thirsty) power unit with the build integrity and considered fitness for purpose of a Japanese automotive product, Mazda’s RX-7 saw the rotary come of age.

Having latterly regained full control from Ford, Mazda, while ploughing its own technically admirable furrow, is believed to have recommitted to the Wankel cause. However, after four generations (if one includes the more recent four-seater RX-8 derivation), the ever-tightening screw of emissions regulation and industry-wide push towards EVs looks increasingly likely to mark the end of the line for the RX-series.

So the rotor turns.