It’s high time to quench the thirst for all things Citroen that I know smoulders among the denizens of this little corner of the World Wide Web. 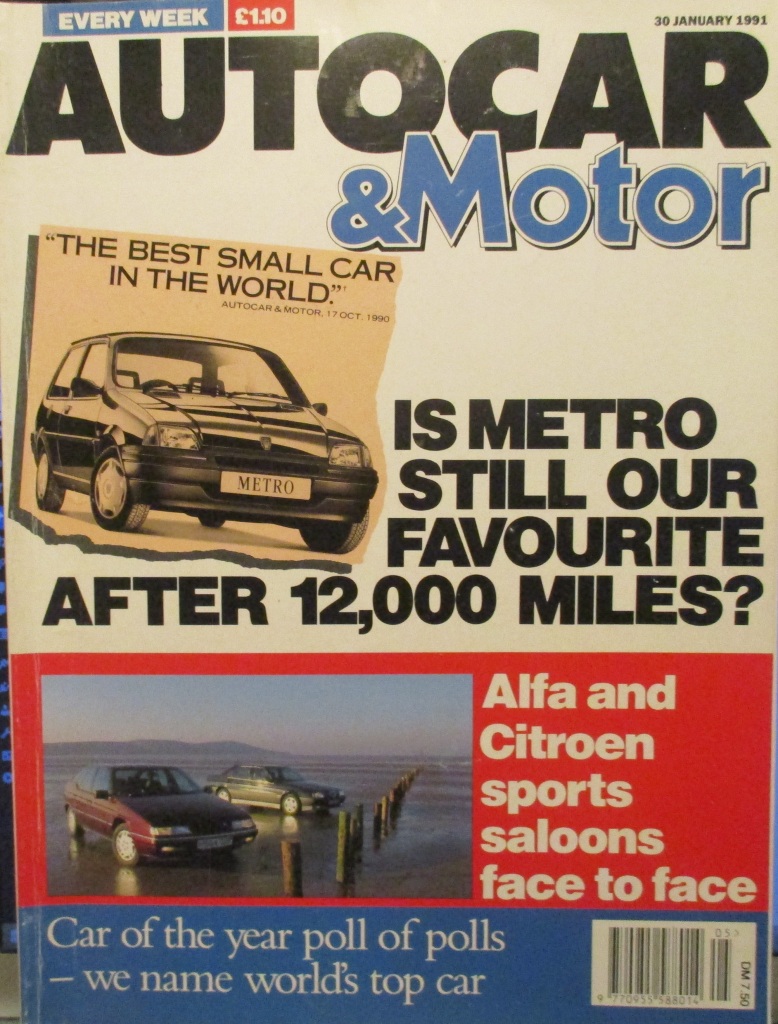 And Jaguar comes into the story too, so that’s another little need satiated. If I push it I can also mention Lancia*. First we’ll start with the source. My reading today is Autocar & Motor January 30 1990 Vol. 187 No 5 (4901). A delightful little snippet about A&M is that in those days a certain Mr James May acted as the chief sub-editor.

And Jesse Crosse served as the technical consultant; now there’s a journalist whose work I always like to read because he has a knack for explaining things with concision and clarity.  With those preliminaries out of the way we can now

get on with the main theme of today’s epistle.

The anonymous A&M roadtesters put the Citroen XM V6 24v and Alfa Romeo Cloverleaf up against each other. This duel ran under the headline “Assaults on the establishment” which is the kind of unimaginatively relevant headline we try to resist here at DTW (I notice my own recent headlines add up to a poem when put together into one lump of text but I have no idea what it might be about). A&M introduced the French and Italian cars (£27,000 and £28,000 respectively) as being aimed at claiming sales in the top end of the market.

Because this is not an Agatha Christie story, I will cut to the end right away.

The XM won the contest on points and lost as well. The Alfa, as usual, had the best engine. A&M declared it to be “wonderfully responsive and fulfilling”. The core of the matter was charisma. The testers loved the Alfa and only ever respected the XM which was better in so many other areas. A&M declared the Citroen to be an uneven performer, “high on ability but somewhat retarded in the finesse department” notably the ride (unforgivable) and the gearchange: a five-speed manual which is “sticky and unhelpful and over-long in action”. I have a 2.0 litre version of this car and it is a baulky gearchange, bafflingly so.

So, having said reluctantly that the XM was the better car (p.s. buy the Alfa though) they pulled the mat from under the XM’s tyres with a “none of the above” remark. The Jaguar XJ-6 3.2, one of the cars the Italo-French pair were supposed to challenge, was better value since it cost only £23,000.

So, what did these cars have going for them? Both the Alfa and the XM were roomy, the XM especially so. A&M loved the Alfa’s engine: “You only have to feel the thrust of the Alfa’s big V6 and listen to the music of its bellicose bark to recognise the presence of greatness.” And about the XM: “The uncannily unruffled ride of the XM, as it levels without trace a series of daunting undulations is special too”.

The Alfa got from 0-60 in 7.8 seconds, almost half a second faster than the car absent from the test, the Jaguar. The XM offered a brisk 10 seconds trip from standstill to sixty. Not enough to knock the ash off your cigar but not bad all the same. A&M called it an “impressively lusty performer” and “marginally smoother and plays a tune almost as melodious” (as the 164).

Further, the XM put down its power well. “The big Citroen gets its power down more effectively and unobtrusively than any other front driven car of similar power in our experience”. The Alfa, on the other hand, spins its wheels in the wet very easily. Super. Don’t drive it in the rain, then.

Let’s find out what was wrong with the Citroen’s suspension and other elements. A&M thought the XM had no steering feel. I don’t get this. I’ve driven an XM for almost two decades along with lots of other cars. I can’t say I notice a lack of feel at all …. someone might explain what this is supposed to mean.

A&M viewed the XM’s chassis as “manageable…” with “superior grip, especially through tighter corners and medium-speed S-bends, meaning quicker progress than the Alfa”. So, that acceleration deficiency meant little once one is up and running on real roads. The XM leaned less than the Alfa too. “Merely keeping up with the XM (in the Alfa) often results in the nose running wide as the 164’s narrower tyres fail to stay on line”.

Now, here’s where I kneel and pray for strength. “But while the XM’s coldly efficient yet rapid progress scorns the 164’s best efforts, there’s always the feeling that the Citroen is just that bit too cool and collected to offer much satisfaction.” Isn’t this as dunderheaded as the claim someone is being “too clever by half”?

I would have thought the requirement for a smooth and spacious limousine was to be able to go quickly without drama. If a 205 offered cool and collected that would be a problem, but not in in large five-seater car like the XM.  Then the next bit of bafflement: “In addition to this aloofness, there’s an acclimatisation period before the driver can be fully confident about its abilities. Only then can its considerable talents be exploited. The XM is an acquired if potent, taste”. Like Chartreuse, I suppose.

I know they wrote these essays quickly but I imagine the acclimatisation period for the XM is a few hours at the wheel, or maybe a deeper adjustment over a week or two. What is that in the three to five years people own a car?  Why didn’t they think of this? Porsches take time to get used to and so does a whopping great Bentley Continental.

After praising the Alfa Romeo 164 for its light and communicative steering, the testers say the XM is “more accomplished in handling, balance, traction and grip.” That´s obviously not good enough. And there’s more: the XM has “reassuringly powerful and firm brakes”. But the feel isn’t any good, they add and then counterpoint: “not that the 164’s brakes offer any more.”

“The XM’s range’s principle claim to greatness is its hugely effective suspension control. The combination of Citroen’s traditional oleo-pneumatic suspension spheres coupled with an ingeniously simple electronically controlled dual-rate adaptive system, places the XM on a plane well above the norm, but only in certain conditions does it excel”. At least is excels sometimes, I’d have thought.

The biggest problem seems to be the XM’s tendency to pitch vertically under “the slightest upset of momentum”. That means, I think, that if the car slows then the front end of the car dips suddenly. And if you dab the accelerator the nose rises up and the tail squats. But braking does not cause this see-sawing, they wrote.

After that, the article returns to praise mode: the car has “a solid finish and first-rate interior mouldings”. The Alfa had an “inviting” and “sporty” cabin, though. For space and versatility the XM “comes out comfortably ahead, carrying five” easily versus the 164’s payload of four people.

A&M did not discuss the styling, and a good thing too because both cars are exemplars of late 80s design. The Cloverleaf had more addenda, natural for is sporty role. The XM V6 looked much like other XMs outside – pointy, sleek, determined, elegant; inside it had hide seats and pointless walnut embellishments.

The Alfa’s headlamps are almost comically wide-eyed compared to the gimlets of the XM – slim, horizontal (and appalling at night) but oh, so sinister. Neither car looked like anything else on the road despite the assertion that the XM was a bigger BX and that the 164 resembled a Peugeot 605.

On the inside, the cars had totally distinct dashboards: the 164 offered a study in Italian geometry, one of the most fastidiously executed IPs of the decade, almost austere; the XM appears to be a study in restraint too with very formally laid out lines and rigorously severe main volumes. They thought it was too German at the time. A look at a BMW or Audi from the same time shows the Germans in party mood in comparison.

Today, either car is a design statement, dripping in charisma and exuding style. And the absent third car, the XJ-6 is no monster either but is most clearly a stylistic mongrel of Anglo-modern and Anglo-classical with fudged and flunked detailing whereas you’ll look in vain for mis-steps on the French and Italian cars. Today, all three are desirable and the apparent demerits that led the testers to decide as they did have, in my eyes, vanished. Time heals all wounds, the tears do one day dry.

*A&M ran a Lancia Dedra on their long-term fleet. They said it did not cope well with cross-winds at high speeds. The handling tended to understeer and “displayed excellent adhesion regardless of road surface”.