The ‘Sixty-Eighters’ rocked France, yet one of its more illustrious offspring would become a bastion of more conformist values. 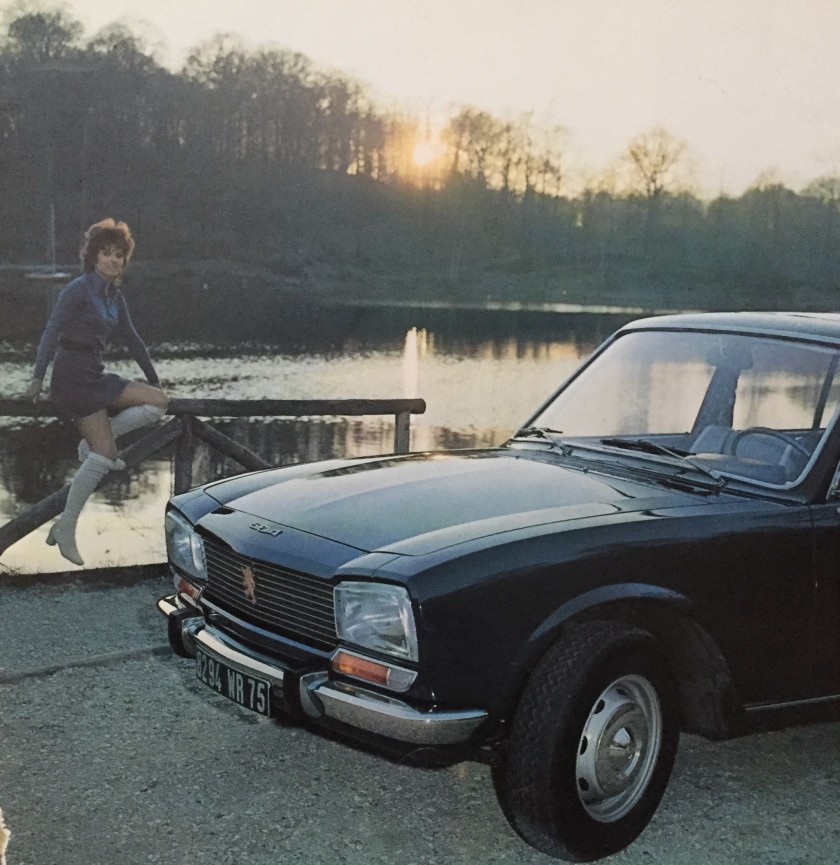 In a curiously prescient article for Le Monde in March 1968, journalist, Pierre Viansson-Ponté made the assertion that France was suffering from the dangerous affliction of ‘boredom’. During a period which French economist, Jean Fourastié coined as Les Trentes Glorieuses, the country settled into a period of political stability and economic prosperity, transitioning from a predominantly agricultural economy to a largely industrial one.

Rural France had decanted into the cities and its universities were brimming with the young and sexually frustrated, expected to behave in a similar fashion to that of their socially conformist parents. But students from Paris’ Université Nanterre, emboldened perhaps from a diet rich in Satre, Brel, and Dylan would no longer heed the paternalistic voices expecting rigid adherence to traditional moralities, and by the spring of that year were preparing to fight for their right to party, preferably without the restriction of clothing. Throughout May, widespread student riots across Paris precipitated a related but separate workers strike, the largest in French history.

Automobiles Peugeot had meanwhile built an enviable reputation throughout the postwar years for producing thoroughly engineered, robust and commendably durable cars of quality and an unmistakably bourgeois bearing, but timing is everything, and since Paris was revolting, the Sochaux-Montbeliard carmaker wisely elected to postpone the announcement of its newest and at the time, most upmarket model until the protesters had stopped burning cars and flinging pavé at the forces of law and order.

An indirect replacement for the successful and critically hailed 404-series, and since the previous model was so well-regarded, it was not deemed necessary to reinvent the wheel. Peugeot after all was a conservatively-minded, engineering-led car business, and while they had embraced front wheel drive for the more compact 204 of 1965, the 504 would retain its predecessor’s conventional rear-biased layout.

Peugeot were one of the few carmakers who really took suspension design seriously, especially when it came to the fine art of longitudinal compliance. The 404 was legendary for its well mannered road behaviour and elimination of road excited noise. The 504 was designed to further this cause, employing front suspension by McPherson struts and lower arms, and a fully independent system by trailing arms at the rear, with double action dampers of Peugeot’s own design and manufacture.

Intriguingly, Peugeot themselves admitted that the 504, while notably refined by contemporary standards, failed to match the standards attained by its predecessor’s less sophisticated suspension design and when the entry-level 504L was introduced in 1973, its rear suspension reverted to the 404 design of torque-tube rigid axle, where most rear wheel vibrations were damped by the forward masses of engine and gearbox, and was noticeably quieter in operation.

In keeping with marque tradition, styling was the responsibility of carrozzeria Pininfarina, the favoured proposal being attributed to Aldo Brovarone. Employing themes previously seen in a number of previous Pininfarina designs, from the 1961 Jacqueline concept for Cadillac, to Belfort’s own 204 Berline via BMC’s 1100 and 1800 saloons, the initial proposal melded these disparate visual elements with those of the pre-existing 404 model.

What is apparent however is that Peugeot’s own design centre at La Garenne carried out a good deal of work refining Bravarone’s basic theme, adding a more assertive and modernist nose treatment, as well as introducing more tension into the body surfaces – a development which in no small way enhanced the car’s stylistic relevance and ‘character’ over what would become a very lengthy production run. 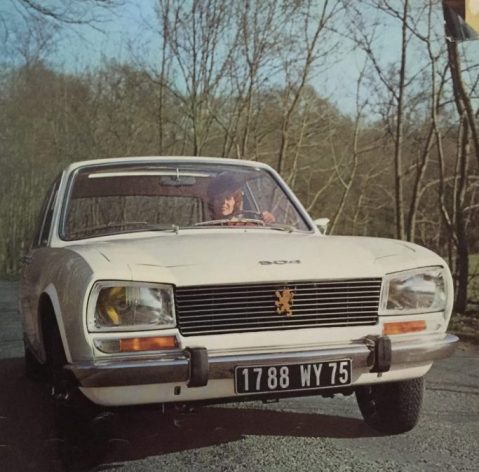 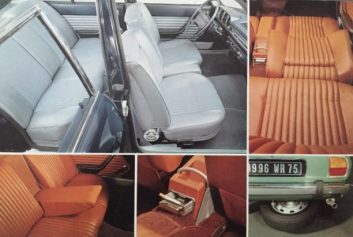 The 504 was eventually introduced at the Paris Salon in September 1968, initially offered further upmarket than the 404 which continued alongside (until 1975). Fitted with a larger-capacity 1796 cc version of Peugeot’s long-running slant-four engine, the option of column or floor shift manual or ZF automatic transmission and critically acclaimed for its blend of attractive modern styling, excellent handling, accurate and responsive rack and pinion steering, superb ride comfort, refinement and build quality, the 504 was justifiably awarded European car of the Year in 1969.

1970 saw a larger-capacity 1970cc engine being offered, as was the commodious estate (Break) and three-row, seven seater Familiale. Designed as an estate from the outset, it differed considerably from the saloon beneath the skin. Altered aft of the B-pillar, the rear body of the estate combined longer bespoke rear doors, a stepped, raised roofline and a lengthened wheelbase. Eschewing the independent suspension of the saloon, the estate utilised a four coil live axle arrangement which was designed to be optimised in both laden and unladen states. Indeed, this side of a large Citroën, there was probably no finer estate car at the time.

The same year, a purpose-designed diesel version was added to the range, powered by a 2112cc engine, which was uprated to 2304cc in 1976 and this extremely durable and economical power unit would also see service outside the PSA fold in Ford’s Granada and Sierra models. Diesel-engined 504s would serve across France as taxis, and in the eyes of many, throughout the 1970s, the 504 would became France’s Strich Acht. 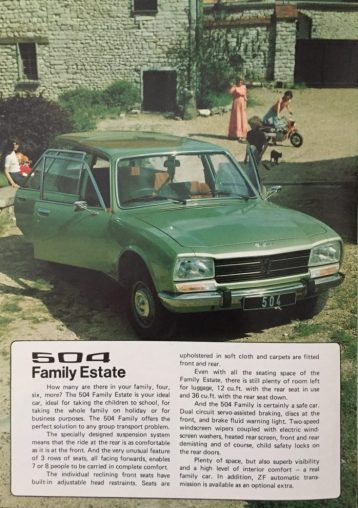 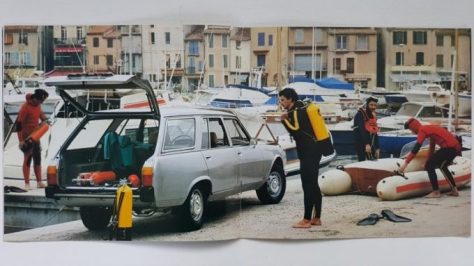 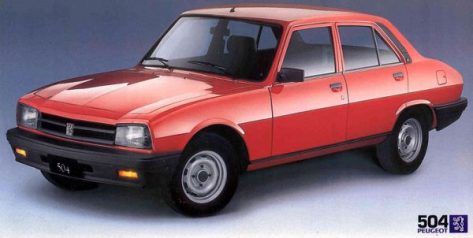 In addition to its homeland, series production of the 504 took place in Africa, South America, China and Spain, with knocked-down assembly reputedly taking place in as many as fourteen other sites Worldwide. The 504 quickly gained a reputation for durability and extremely long-life, with the bulk of third World production being of the more basic, live axled, diesel-engined models, which was augmented by the introduction of an even more rugged Commerciale pick-up version in 1979. The notable exception to this being the US, where a lack of sufficient site-specific proving meant that the normally durable 504 became something of an expensive and sluggish-performing liability.

The 1979 European market introduction of its closely-related 505 model replacement, saw the range trimmed back, prior to being phased out entirely from Europe in 1983, after fifteen years and around three million built. However, the 504 was nowhere near the end of its life, with Argentinian production lasting until 1999, while Nigerian and Kenyan assembly continued until 2006.

Built in a bewildering array of derivations and country-specific bodystyles, the 504 in all its forms proved not only to be one of the most durable cars Peugeot ever made, but perhaps the definitive car to bear the Lion of Belfort emblem. And while the later 505 improved the breed, most notably with more modern styling, it was never quite held in anything like the same degree of genuine regard as its more accomplished predecessor, either as a consumer durable or indeed as an example of the stylist’s art. 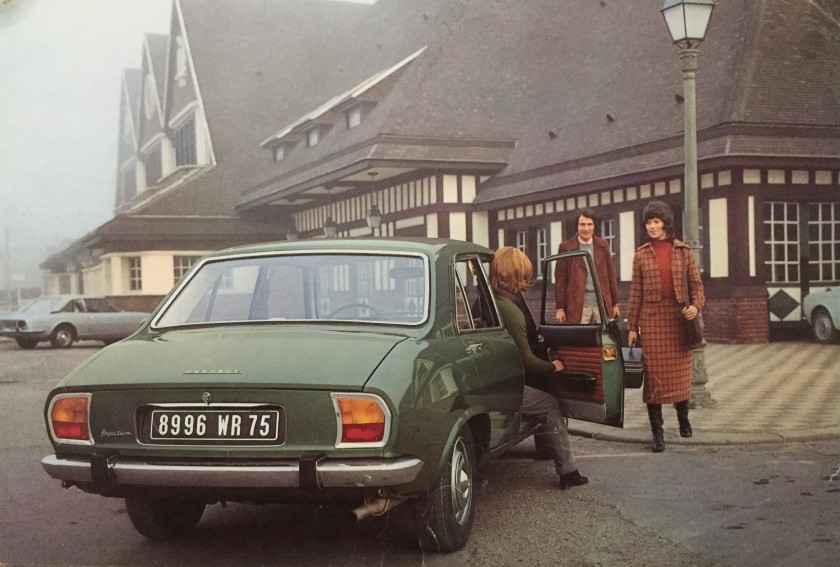 By June 1968, les événements de mai quickly faded as France returned to what it knew best. The strikers and student demonstrators largely went back to their posts and dormitories, the former having gained notable concessions from the French Government and the latter (arguably) having changed the very social fabric of the Republic.

While many of the children of the revolution would later become leaders of France’s administrative and political establishment, the 504 despite the coincidence of its birth, went on to have its status in France’s national consciousness solidified, embodying in eloquent if somewhat ironic fashion the rather more durable bourgeois values the Soixante-Huitards briefly rose up in defiance against.

23 thoughts on “Children of the Revolution”