This fine concept from Maserati’s coachbuilt days illustrates how far from home the Tridente has drifted.

Maserati, at the height of their gilded age as an exclusive automotive atelier, produced a bewildering array of suave gran turismos and more overt sporting machinery, along with the occasional one-off for their more discerning clients. At the 1965 Salone di Torino, Carrozzeria Vignale, who carried out a sizeable proportion of Maserati’s styling duties displayed an elegant four-seater concept.

This understated design was seemingly so well received, that Maserati commissioned Vignale to submit a more production-feasible proposal and at the following year’s Concorso internazionale di eleganza per auto in Rimini, the Mexico, which was to all intents and purposes a slightly shorter, more agile, if rather straight-laced two-door version of the Quattroporte model, made its debut.

Prior to Vignale’s design being sanctioned however, management at the Viale Ciro Menotti are believed to have commissioned prototypes from rival carrozzieri, with Bertone and Frua also submitting proposals.

Pietro Frua’s relationship with Maserati was also somewhat symbiotic in nature, his carrozzeria having created some of the most compelling and original shapes on il Tridente’s chassis’. Of these, perhaps his striking series of rebodied 5000 GT’s best represented Frua’s unique aesthetic. According to biographers, Frua largely worked alone and didn’t really speak about his work, so little is known about his methods or influences.

It appears the very first Mexico chassis (AM112 001) was bodied by Frua during 1966. Incorporating elements such as the upward ‘kick’ at the rear quarterlight (akin to that of the 5000 GT), a tall, delicate, glassy canopy, a broad, Mistral-esque grille with single headlamps set into chrome-accented nascelles, Frua’s proposal was visually arresting, but remained a one-off, being sold in May 1967 to a Mr. Nello Della Casa of Modena. 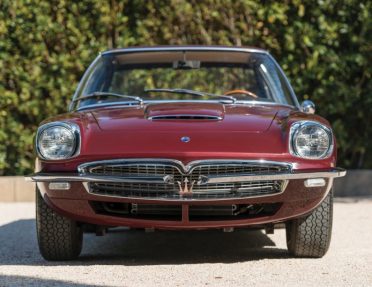 At the following year’s Geneva show, Frua was again commissioned to produce a development of the previous year’s Mexico prototype, somewhat hurriedly completing the car in non-running condition in time for its premiere upon the the carrozzeria Frua stand. Finished in a very subtle shade of pale metallic green, with an interior in Bordeaux leather, it closely resembled the previous year’s concept – the 1968 proposal differing most notably in its Quattroporte-inspired nose treatment, combining paired circular headlamp units and a revised, smaller grille.

Following its show debut, the car languished at Frua’s studios for over a year before being sent back to the Viale Ciro Menotti and receiving a 4.7litre Maserati V8 power unit developing 290 bhp. Mechanically identical to the production car, employing a live rear axle, double wishbone independent front suspension, disc brakes all round, and a ZF five-speed manual gearbox, the car was not fully completed until 1970, by which time it had been repainted blue, before being dispatched to its new Spanish owner. More recently, the car was rediscovered in a private collection and fully restored in 2013, being returned to its original Geneva show colour scheme.

Vignale’s production Mexico was a sober, neatly executed, handsome design, although if one was to be critical, it lacked sufficient visual drama to excite the eye. Frua’s shape, on the other hand employs more definition, more depth, is arguably more stylish and was more in keeping with the Maserati image of the time. Today, it stands as a prime example of ‘peak GT’, a point where such cars could be said to have attained a creative apogee.

FCA’s current lords and masters would do well to study the cars of this era which bore the Tridente emblem with such delicacy of line and patrician grace. Because while both the times and the customs have changed beyond recognition, style and good taste remain timeless.