It seems unfair to keep you on tenterhooks so I have decided to reveal/confirm the identity of today’s mystery car.

It is, of course, a Lancia Fulvia saloon, produced from 1963 to 1976 which really is a very long time indeed. The Fulvia was still good when it ceased production but the market’s tastes had changed. While everyone adores the admittedly perky, perty and pretty Fulvia Coupé, and many like the odd Zagato derivatives, I hold a candle for the austere and formal saloon, attributed to Piero Castagnero at Lancia’s Centro Stile. This and a few other cars suggested to me that if you want to understand car design in general, think of tailoring as a metaphor.

The Fulvia is properly detailed and the parts so carefully related to one another that the car possesses a quiet, resonant dignity. Having a chance to see one so close is a rare treat and when you do so you see that it is not necessary to lard a car with features or even to imbue it with a great deal of luxury to make it feel very special. Rather harder than adding 30 more bits of equipment and leather and wood is adding consideration and thought.

I think the sensibility that drove the creation of this car is utterly extinct and has been since 1976. And the car has no analogue today: a thoroughly refined, carefully assembled, excellent and modest machine whose emotional satisfaction comes from its rationalism. Perhaps the Subaru Impreza has something of that sufficiency or maybe the higher spec saloon versions of the Focus, Astra and Megane might be close in some ways. 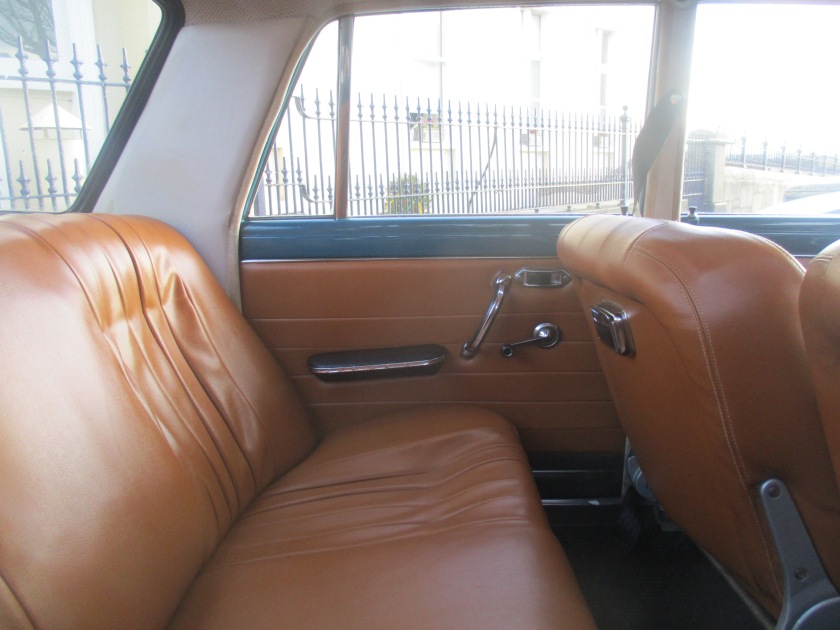 And yet, to again cite David Pye, there is useless work all over the Fulvia, to show that the car’s form has been subject to care and attention. I particularly like the corner where the front wing meets the leading edge of the bonnet. There’s a small crest on the wing’s upper edge. Part of that corner is part of a perfect sphere with lead-in curvature forming the transition to the areas around it. This was formed by hand and eye and not a curvature fence in sight. It’s immaculate and pressed beautifully too.

Consider the cast alloy headlamp surround. That could easily have been made of chromed stamped tin; Lancia decided that would not do, not precise enough. The interior has something of the robust comfort of good public transport (I live in Denmark so that is not an insult) which I associate with the Toyota Century. The luxury comes from knowing the vehicle is hard-wearing, fit for purpose, extra-sufficient as opposed to merely plush.

In addition to all of that static pleasure is the fact the car drove very well indeed. The engines ranged from a little over 1.0 to eventually 1.6 litres, the weird narrow angle V engines being of considerable renown. At the front were a single leaf spring and wishbones; at the back leaf springs and a Panhard rod and beam axle. This delivered a refined ride and handling compromise in line with the car’s calm character.

What might be so captivating for me about the Fulvia is that it is a car created by a fusion of romanticism and rationalism. It is romantic because it there is needless beauty covering the car like kisses and rational because there is a sufficiency blended to excellence.

Nothing is superficial. The engineering solutions such as the front-wheel drive configuration and narrow angle V suggest adventure and the proportions and materials suggest formal conservatism. Which is it? You can never say for sure because the Fulvia is point, counterpoint.

34 thoughts on “The Big Reveal/Confirmation”