An exhibition of landmark motor cars from a gilded age prompts us to ask: Is beauty enough?

During the 1950s, philosopher, Roland Barthes hailed the modern automobile as a visitor from the heavens. Some sixty years later, it seems we have returned the compliment, by propelling a Tesla motor vehicle out into the solar system. An audacious publicity stunt, a sign that we have lost our sense of wonderment for the motor car, or proof that our supposed mastery of the art has led us to believe we can touch the hem of the Gods themselves?

The evolution of the motor car raises many questions, especially now as it undergoes perhaps the most profound transformation in its century-plus as the developed World’s most significant and robustly desired design object – a creation Swiss art curator, Roland Wetzel somewhat inimitably described as “a semantically highly variable socio-cultural figuration.” Easy for him to say. One cannot help but find oneself comparing any exhibit of motor cars to that of The New York Museum of Modern Art’s defining 8 Automobiles exhibition. But if MoMa‘s Arthur Drexler was to curate a car design exhibition today, what cars would he choose to represent it?

Last August, Dusseldorf’s prestigious Museum Kunstpalast boldly premiered a new design exhibition. Titled PS: Ich Liebe Dich! (or PS: I Love You, to English speakers); a clever pun on the European denomination for horsepower as much as an expression of our once unbridled affection for the automobile as expressed by some of the most powerful examples of sportscar iconography of the latter 20th century.

Philip C. Johnson memorably characterised the motor car as being the most useful of useful objects, but it would be stretching credibility to fatigue-point to ascribe similar qualities to the vehicles celebrated here. The cars appearing at MoMa in 1951 probably appeared somewhat removed from their natural habitat of the open road, but those corralled by Museum Kunstpalast are more habituated to the sterile environment of the arts space, as these highly collectable (and valuable) vehicles are rarely driven and are routinely collected, stored and viewed very much as art objects.

But are these cars really worthy of studious contemplation in 2019? Of course, a museum can curate and show anything it deems of cultural and aesthetic merit and collating any number of related objects within a real or imagined context ought at the very least to pose some interesting questions or serve to illuminate in some manner.

But is the Museum Kunstpalast collecting culturally significant consumer durables and curating them in a cohesive and intellectually satisfying manner or simply gathering some of the most beautiful automotive designs of all time; cars which owing to their aesthetic value and significance defy categorisation or critique, for us to admire and cast our dreams upon?

Perhaps I ask too much. Curation in itself is a difficult art. It relies upon an understanding of the subject (and surely curators cannot be experts across all fields), the ability to discern connections amidst the broader culture and the capability to frame the chosen works in a coherent and (one hopes) thoughtful manner. It is also (and this is an important point to make) heavily reliant upon the availability of the chosen works and the owners’ willingness for them to be marvelled at in a public space. For the Museum Kunstpalast is not New York’s MoMa, lacking its budget, not to mention its reach.

I feel duty bound at this point to make clear that I have not attended the exhibition. Does that disqualify me from critiquing its execution? That is not for me to judge. However I have obtained a copy of the lavishly produced accompanying catalogue. The core of this 200-page tome contains a highly impressive series of erudite essays which deal with the broader significance of each of the featured automobiles taken from the pen of frequent DTW contributor and critic, Auto-Didakt’s Christopher Butt, and bolstered by contributing writings from significant figures in the European design arts world, namely academics and authors, Markus Caspars and Paolo Tumminelli, and arts commentator, Niklas Maak.

The exhibits themselves could be said to begin where 8 Automobiles ended. Obviously, no serious retrospective of automotive design could possibly ignore Pininfarina’s 1947 Cisitalia 202 and as the template for early post war design, its provenance is unquestionable. Bookending the exhibits is Bertone’s Lamborghini Countach, a design which marks the end of design classicism and the beginning of a form of projectile-informed surfacing, from which sports car design has yet to emerge.

Viewed within this prism, the exhibition has coherence, contrasting the humane sensuality of Battista ‘Farina’s Cisitalia with the more sterile, more weapon-like Lamborghini – a transition from softness to harsh angularity. Both cars offered powerful design statements and while the 1947 car’s was one of wide-eyed optimism, the 1974 equivalent now appears rooted in finality. After all, it could be argued that the Countach marked the end of sports car design, certainly as a purely romantic pursuit. For is it possible to argue that anything remotely as disruptive followed it?

Another Lamborghini however, 1966’s Miura, is accorded greater significance here, two of which are presented like ceremonial golden lions. The Miura of course is one of those inviolate designs (despite its hotly disputed authorship), as is Mercedes’ 300SL ‘Gullwing’, another car for which the Kunstpalast’s curators saw fit to display twice.

No questioning either car’s aesthetic merit or significance amid the pantheon, but what could be questioned is the choice of so many early ’50s Pininfarina designs (Lancia Aurelia Spider, Alfa Giulietta Spider, Ferrari 250’s GT SWB and California Spider), which cleave to such a broadly similar theme.

One might also query the presence of the Facel Vega, because despite its undoubted elegance (and it looks a very fine example indeed), one could never describe it as a sports car. But to the museum’s credit is the presence of BMW’s 1972 Turbo styling concept and by direct contrast, the fully engineered Mercedes-Benz C111 prototype from 1970, which represent two sides of a semantically-loaded coin.

Nevertheless, despite the quality of the exhibits and their well-judged staging, there is something of an elegiac feeling to the collection, a sense of not only the cars themselves being bookends, but the exhibition itself being in effect, the inverse of MoMa‘s 8 Automobiles, the exhibition which marked the opening of the design conversation. With the sports car in seemingly precipitous commercial decline, there is a strong sense of these cars, displayed in such a static, formal setting as tombstones, rather than the dynamic objects they once were.

Collating some of the most beautiful cars of all time is hardly an unworthy endeavour, if a highly subjective and perhaps, ultimately futile one. Certainly, it makes it fiendishly difficult for the curator to say anything remotely fresh, to say nothing of the critic, who is left wondering who this is for? As to the visitor, well, who doesn’t like being in the presence of beauty? After all, some of it might just rub off. 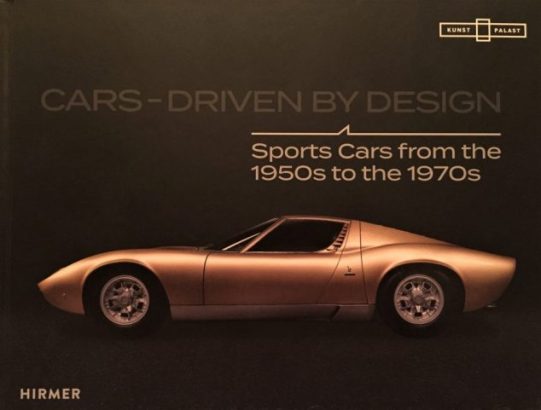 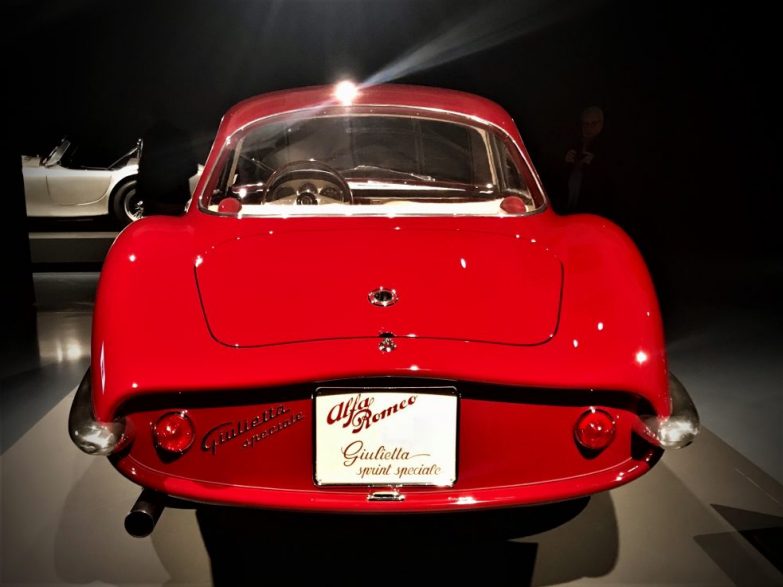 But returning to Barthes and his eulogy to the earthbound Goddess, surely any celebration of the motor car ought to incorporate those vehicles which lifted our eyes skywards and moved us in more ways than simply in terms of raw desire? Because despite the undoubted merit in this collection of ravishing motor cars, the taste it leaves is one akin to what one feels after enjoying too much fine cuisine. Sometimes we need a little more roughage in our diets.

PS: Ich Liebe Dich! runs at Düsseldof’s Museum Kunstpalast until 10 February 2019 and the excellent accompanying book, which I can wholeheartedly recommend, can be purchased here, or from the usual online outlets.