If there should be a parlour game to identify the most DTW car possible then this might be one an exemplar: Bertone’s Saab Novanta concept car. 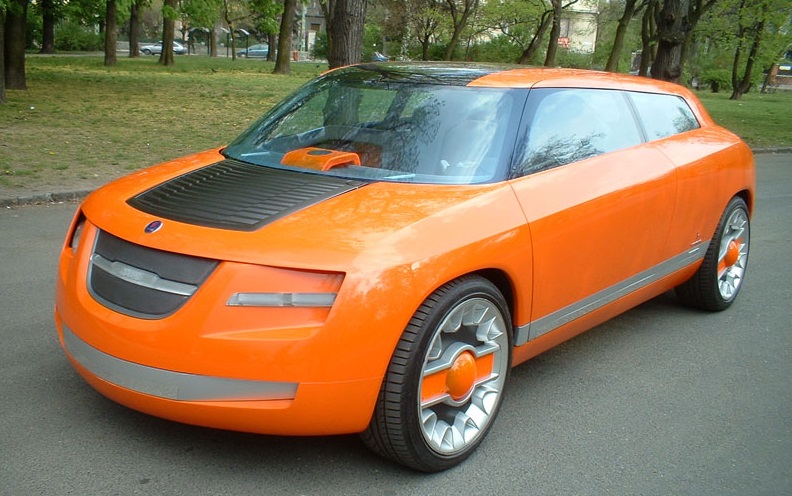 Why is this a very DTW car? This is a concept car from the year 2002 and has a challenging appearance; it was good enough to deserve production but wasn’t produced; it was a proposal for an extinct and much-missed brand (Saab) and it originated from a now-dead coachbuilder, Bertone. Finally, you can’t help but notice that it is orange. We like orange.

Stephen Newbury in Car Design Yearbook 1 describes the car as being chiefly about the relation of the driver and car. Bertone and SKF aimed to design an interior that could better accommodate drivers’ specific ergonomic needs through adaptable hard structures (seating, steering, et cetera) and “soft” control systems such as interfaces and information delivery. That being the case I am very much obliged to show one of the few interior images available, snagged from CDN who ran an article on this car a couple of years ago:

You can also find sketches of the interior here though they are not especially revealing, lovely as they are as drawings. That transparent orange structure runs from the centre of the front console rearward and then on back to divide the rear passengers left and right. Most of the controls seem to have been grouped inside the steering “wheel” with some others positioned rather far away on that orange iMac-ish console. Maybe it’s just for mapping and television.

SKF who worked on the steering made huge efforts to develop a believable drive-by wire system but this is one of those zombie-ideas that seems not be actionable and yet refuses to die (like “intelligent” fridges and interactive floors). “When compared with the Bertone-SKF Filo, the Novanta demonstrates much-improved steering feedback and feel, as well as improvements in the braking system and transmission interfacing,” they said. it went nowhere – drive-by-wire is still a pipe-dream.

The Novanta had no brake or accelerator pedals. The stop, steer and go functions all lived in the hand-controlled interface ahead of the driver, “a smart electro-mechanical actuating unit” as SKF call it. The SKF designers chose to have that assembly mounted to the door; shut the door and the control device would extend from its home and stretch out ahead of the driver. Look at the photo with the model in the driver’s seat. There is no steering column between the controls and bulkhead. In a crash there would be less ahead of you to whack into.

I’d call that kind of innovation precisely the kind of thing you’d have expected of Saab. Putting that together with Bertone’s blend of traditional Saab touches and their own original contributions makes aesthetic and marketing sense. Based around the Saab 9-5 mechanicals, the Novanta served also to mark Bertone’s 90th year.

More overtly, the decision to make this a packaging car means the requirements of the interior volume takes precedence over the pressure to deploy more conventional proportions on the outside. It is not obviously an attractively proportioned car – and I’d argue it’s the better for it too. It is a proper show car and also one of those insprired by product design norms.

Bertone’s designers didn’t consistently follow through in this determination to put function over form. Instead of a being a spacious room for three, the rear compartment is divided by that orange structure – an object whose purpose in life was more metaphorical than useful. A 4.4 metre long family car does not need a ribbon of shiny plastic taking up the space where a person could otherwise sit. Furthermore, the deep shoulder really eats into cabin space. So, what is it: form or function?

Having got that worthy stuff out of the way, I want to walk around the back and look at the interesting resolution of the theme:

The rear windscreen is not especially practical but I find its graphic effect worth the trouble. The way the transitional surfaces around the boot and c-pillar work deserve notice. Let’s squint at that bit.

I have marked up the edge of the boot with a dark green line; along the very deep shoulder you can see another break, also marked in dark green. Between those is a generous, large transition from the boot’s upper surface to the body side, marked with a folded arrow. I consider that a very creative and more than acceptable solution to unifying those surfaces as a satisfactory whole.

As a detail, the ball-corner “B” is just lovely. Is the ball corner the hall-mark of the industrial design form-style, just as double-corners are for the Baroque? Don’t bother Googling that – it seems to be something no-one else has much remarked upon.

Stepping a little further back, notice the deep and oh, so simple C-pillar, a third of which is actually the window frame/upper door.

Further interrogation of the rear causes one to wonder: in what way does the boot open? I haven’t seen any images of the boot aperture in the open position. The sock-drawer concept as used in 2002 Lincoln Continental would not be appropriate for a car of this size. Does the rear screen open? Who can say.  So, did Bertone fudge this?

At the front end, notice the elegant way the headlamp recesses relate to the main surface. It looks as if the main surface has been cut and simply folded inward along the vertical dotted axes I have marked out. That is very efficient or sculpturally economical. The leading edge of the bonnet links the two recesses so uniting form and function. Hanging under that line we see a grille, in the Saab manner. That’s formally correct and also a good reference to Saab design characteristics.

The engine’s presence has been signified by the use of a different colour paint treatment aligned graphically to the grille. And, I suspect, there is fudge here too. How does one access the engine?

The same year, Saab showed the 9-3X (above), their take on a smaller vehicle. It shares the Novanta’s cantilever-effect windscreen and rising waistline. It has a longer bonnet though and the C-pillar, lamps and rear are a lot less well sorted out in comparison to the Novanto.

Further reading (and there is lots of it):

Saab Planet on the sale of the show car.

Car Design News on the Novanta. “Bertone’s take was far more architectural in its construction, with sheer surfaces with sharp intersections, and broad, parabolic sweeps for major volumes.”

Autointell on the exterior: “The body is originating from a counterpoint of concave and convex volumes that are underlined by tense geometric lines. The side shows a smooth vertical flank defined by a high belt-line and sloping roofline. At the back, the roof forms almost a right angle with the large, vertical rear window that drops in a decisive movement to the rear of Novanta.”

Techshopmag on the SKF drive-by-wire controls.

Is it a saloon or hatchback? Geneva show images.

View of the seats.