To try and understand what exactly went wrong with the proud Alfa Romeo brand over the past 15 years, there is no better example than this ItalDesign concept car.

Admittedly, there is a production car by the name of Alfa Romeo Brera, of which 21,661 units were built between 2005 and 2010 at Pininfarina’s Grugliasco factory. It even shares some visual traits with the 2002 concept car of the same name. But little of its character.

For the Brera, as originally envisaged by Giorgetto Giugiaro, was a genuine halo car. Which isn’t as far-fetched a proposal as it may appear at first, for Alfa had commissioned quite a few of these over the decades: From the outdated-yet-pretty 33 Stradale, over the charming-but-ill-conceived Montreal to the bold-for-boldness’-sake SZ.

None of these coupés had been runaway successes, and yet they had – to varying degrees – helped keep Alfa’s thoroughbred heritage and upmarket flair intact. The same mission statement appears to have been at the forefront of Giugiaro’s mind while he went about creating Brera, as he chose the rear wheel-driven, V8-powered Maserati 4200 GT as the basis for his creation, rather than one of Alfa’s own, rather more humble front wheel-drive platforms.

This choice enabled Giugiaro to employ quintessential sports car proportions and combine them with quite a few original/unusual details. Most striking among these were obviously the six circular headlights (of decreasing diameter, the closer to the scudetto they are positioned) that lent the Brera such an unmistakable face. Yet its silhouette is similarly striking, in that it eschews the typical fastback sports car rear end for an outline that’s somewhere in between a ‘breadvan’ design and a slantback.

Show car accoutrements like its scissor doors, glass roof and the slightly Steampunk interior design apart, there appears to have been little standing in the way of the Brera entering production as intended.

On top of exuding some glamour within Alfa’s ageing range (the ‘comeback’ 156 model was already five years old by that point), the Brera would also herald a new era in the marque’s design, as Giugiaro had both paid respect to the previous production cars’ style and adapted it in significantly altered a fashion.

So the horizontal rear lights that had become an Alfa staple during the 1990’s remained in principle, as did the lowered scudetto the 156 had introduced. Even the wheel design paid homage to Alfa’s classic teledial motif. And yet the Brera was hardly some Alfa’s Greatest Hits best-of, but introduced cleaner, more stringent graphics and a considerably more muscular stance than the rather more romantic production cars previously designed under Walter de’ Silva. 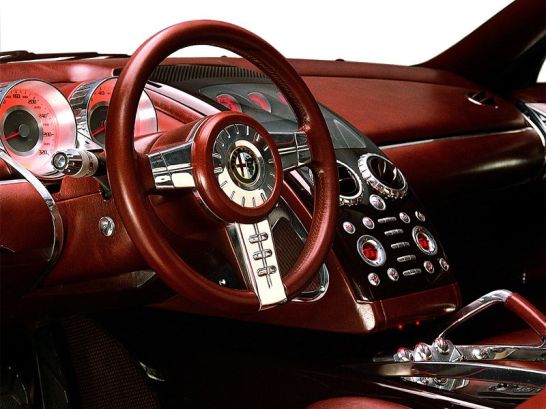 So why did this hardly otherworldly, well-received concept car not go in production more or less unchanged?

“Ma dai… that one fell victim to politics” is all Maestro Giugiaro himself would say about the matter, briefly displaying uncharacteristic levels of frustration, before returning to his typically vibrant disposition.

The day might come when Giugiaro eventually feels the need to elaborate on the exact nature of these ‘politics’, but for the time being, one can at least take educated guesses. For the Brera’s unveiling in 2002 coincided with mounting losses at Fiat and new products like the Stilo falling dramatically short of sales projections, which resulted in long-serving Fiat CEO, Paolo Cantarella’s ousting. This marked the beginning of a particularly tumultuous period for the Italian automotive giant, which – one could argue – hasn’t ended even today.

With new executives moving in and out at Turin and Milan every other week, considered and elaborate product planning became increasingly difficult. The ongoing (but eventually divorced) relationship with General Motors also dictated that supposed scale effects needed to be taken advantage of, resulting in more than one unfortunate product-related decision regarding the Alfa Romeo brand.

For those reasons, rather than an exclusive, V8-powered Brera at Porsche 911 prices (or higher), Alfisti the world over could welcome the Giugiaro-designed Alfa 159 in 2004, which sported more than one Brera cue and did its best to disguise its ancient, overweight platform – a vain effort ultimately, as the car’s inability to provide driving pleasure thwarted whatever charms the styling might have held in store for the customer/driver.

One year later, an Alfa coupé by the name of Brera was launched, to which all of the aforementioned points applied as well, only even more so.

However, the true irony of the Brera’s fate only became apparent five years after its original unveiling, when Alfa Romeo did offer a Maserati 4200 GT-based, limited production halo sports car for sale: The 8C Competizione.

Designed under Alfa Romeo Centro Stile’s chief designer at the time, Wolfgang Egger, the 8C was, despite sharing the same engineering specifications with Giugiaro’s take on the concept, drastically different from the original Brera. Unashamedly (or rather: relentlessly) nostalgic, it aimed at evoking the flair of Franco Scaglione’s Alfa designs rather than the beginning a new, truly original chapter in Alfa Romeo styling history.

While its aesthetics were well received by the press and public, the 8C ultimately happened to suffer from the same ills as the production Brera: A grossly overstrained chassis. In view of this, none other than Jeremy Top Gear Clarkson argued that something as pretty and useless as the 8C must be something other than a mere car: A piece of art.

Regardless of where one stands regarding the aesthetic merits and faults of the Brera and 8C Competizione, the decision making behind both these designs meant neither stood a chance at either sales success or a significant influence over the Alfa brand’s perception.

Giugiaro’s modernist approach and Centro Stile’s nostalgia were both insignificant cogs in a dramatically off-centred wheel.