Outdated, outclassed and eclipsed by modern, less compromised utility vehicles, the Land Rover Defender has become an anachronism. Not round these parts.

Despite a well-documented (and perhaps these days rather overstated) predilection for drinking, storytelling and singing songs, the Irish are not a nation especially prone to acts of frivolity, especially when it comes to the subject of car ownership. In fact your average dog-walking Driven to Writer seeking diverting automotive ephemera finds it somewhat meagre fare for the most part. Yet here, at the gateway to the Wild Atlantic Way, one notices certain surprising patterns, assuming one develops the requisite eyes to see.

Ireland’s relationship with old Blighty is long, deep and at various times over the past 800 years (or so), troubled. Yet there remains an affinity and latent affection for our closest neighbours, even if they do have a tiresome propensity to try our patience from time to time. But it is perhaps this sense of fellowship and maybe the presence of a good number of British expatriates resident in this part of the Munster coastline that may account for the disproportionate number of Land Rover Defenders which adorn the townscape and surrounding area.

The age range of the examples photographed here stems from, I presume, the early 1960s (older Landies all tend to blend into a oneness for me), right up to the most recent example spotted – a 2017-registered last of the line model, which has so far eluded pixelated capture. What unifies each however, including the somewhat incongruous 2008 Bowler-enhanced and to my surprise, diesel-powered edition, is the fact that all appear to be in daily use and a sizeable proportion to be working vehicles – not least the ESB Networks’ example shown above. 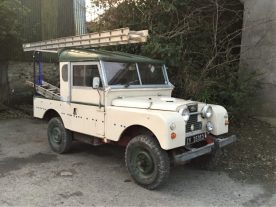 It is most likely unwise to draw too many unscientific conclusions as to why these local individuals have chosen a Land Rover as their workhorse of choice over something more orthodox such as a Hi-Lux, L200, Maverick or similar. I suppose one has to conclude that for their owners, they offer an assortment of virtues that transcend more prosaic matters of simple utility, reliability and fitness for purpose. Defenders after all seem to be viewed as fundamentally lovable things, cherished as much for their foibles and eccentricities as in spite of them.

Curiously, as soon as I discerned a pattern of Defender ownership emerging, I found myself discovering the confounded things just about everywhere. Yet on one hand, while the apparent popularity of the Land Rover amid this neck of the woods could be said to auger well for the forthcoming model’s prospects, I might council a quantum of scepticism.

At a likely Euro equivalent of over £50,000 a pop for an entry level, SWB 2020 Defender, it would require a few hearty draughts of optimism (or something stronger) to envisage a sizeable queue forming. After all, you’d get yourself an awful lot of old-school Landie for that sort of money – should that be your bent – and not have to worry too much about getting its boots muddy either. We might be a lot of things down around these parts, but we’re not complete eejits.

6 thoughts on “Lay of the Land”