Perhaps this is overdoing it, another Nissan article. Even still, I feel the burning need for DTW to have the USP of being the “go-to” place for information on the Datsun 280C.

Following an encounter with a real, live diesel Laurel recently, I have been trying to find out some more about how these cars were viewed at the time. To that end, I got a hold of a copy of Motor from September 1980. I planned to extract the choicest bits of text and discuss their implications so we could all be a little wiser about these fine cars.

Some picture research had to be done and the first thing out of that was this image which made me sit up and stare. This was because I had not really understood side profile of the car; the article’s photos are so poor they might even be from the Archie Vicar archive. So, this image revealed things I had not seen properly before.

The side view must have been the elevation the Datsun designers focused on, since it reveals remarkable interest. The proportions are rather forceful: there is a long oblong underlying the lower body and a rather smaller one, set well back from the front axle, which underlies the upper body. It is on the verge of being dramatic, heading towards Jaguar territory, dare I say it. The one detail that unsettles is the way the d-pillar rests beyond the line of the back axle. It is the trailing edge of the DLO that rests over the axle line.

The second marked-up photo shows the entire C-pillar outlined in red. The base of that trapezoid is positioned over the rear axle. However, the DLO cuts into that so you don’t see the geometrical base but an optical base, set a bit rearward. It made me think of the 1977 Chevrolet Caprice. And I was wrong because the Chevrolet doesn’t have a third side glass:

What would the Datsun look like with a conventional treatment?  Here’s the 280C without the third side window: 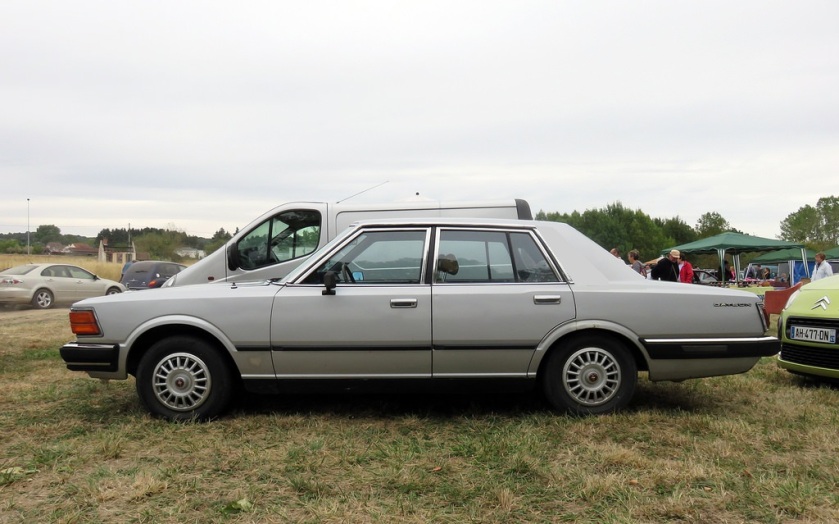 It’s still not a Caprice, even with the plain C-pillar. It has a heavier feeling, maybe suggesting an Opel Admiral. I tried to move the whole C-pillar forward over the rear axle and that looked wrong; as ever a car design is often the result of a balance of factors and you can’t change one thing without affecting the rest. This mash-up is just for an impression, don’t look too close:

That imbalance of the C-pillar might not be a mistake (which is something inadvertent) so much as a deliberate subversion of expectations, adding a degree of spice to an otherwise classically proportioned car. The effect is even stronger when you see the rearview.

That is a very pleasing big rear windscreen, going the full width. The tail-lamps are far more successful than the front lamps. I think you are supposed to read them as one unit, framed by chrome edging. It doesn’t entirely succeed because there is visual noise from the small slivers of brightwork within the light units. And again, I am not that bothered by this.

We turn now to the front and if this was a guided tour around a museum we’d be reminding the group that coffee and biscuits are available for purchase in the museum shop. Can we find anything? There’s a chamfer on the leading edge of the bonnet; a small bonnet mascot; the indicators protrude a bit and the grille itself is not a rectangle but is slightly wider a the top than the bottom which makes the car lean forward visually. Are there just too many slats on that grille? It’s almost like corduroy.

The bumper could be from any number of similar cars; below the line of the lamps the designers were on autopilot.

The secret to a front end-like that is not to look directly at it. You need what I have termed Japanese looking. Horizontal, horizontal, horizontal with subtle articulations for the top of the grill and those inclined lines next to the lamps. As we have said here before, Japanese design is home to remarkable subtlety and as I write that I am aware a car like this would have screamed transatlatlanticism or even America. So, find an American car that is really like this.

I’d intended to go through the Motor review and cherry pick some choice bits but instead have ruminated on the styling, something Motor sums as “impressive rather than stylish“. They went on to say “The opera windows forward of the rear pillar, in particular, indicate that the styling is still influenced by the fads of the American market: few of our testers found it attractive to look at.”

I’ll have to return to the rest of the car at another time.

Of more fundamental concern might be to do with the way this design dodges the failing of the Talbot Tagora. Despite the plain lines and strong parallelism, the 280C looks quite distinctive. Where’s the character hiding?  The Tagora is similarly rectilinear and ends up as a generic kind of shape, very non-specific: all the tropes of the period and nothing of its own. I think it’s because the 280C has a bit of inflection, a few angles at key locations that it distinguishes itself.

57 thoughts on “There Is A Reason, Embers Cold”