The final Ford-era car in the Swedish brand’s lineup cannot hope to match the more recent cars’ impact. And yet it still impresses.

“We’ve got something with a bit more oomph than usual – a Volvo V40 T3 R-line. Would that be fine with you?”

The friendly car rental agency clerk may have been slightly wrong about the power output of the car, but that point notwithstanding, the Volvo was very fine with me. After having sampled models from Volkswagen’s, Mazda’s and Ford’s respective ranges recently, this round of rental car roulette marked the opportunity to sample the final Volvo developed before the company from Gothenburg was taken off Ford’s hands by its new owner, Geely of China.

As such, the V40 is very much a phase-out model, based on quite a few bits of previous-generation Ford Focus, sporting little of the sophisticated style developed under (now Polestar CEO, then-Volvo chief designer) Thomas Ingenlath. Apart that is from the ‘Thor’s Hammer’ headlight graphics it received as part of a mild facelift three years ago.

Overall, this V40 is still very much in keeping with the Volvo style established under another previous chief designer, Steve Mattin – even though it is officially claimed to have been designed under his pre- and successor, Peter Horbury. That said, the abundant decorative flourishes that have been a Mattin trademark since his days as an exterior designer at Mercedes-Benz are very much in evidence. A little bend here, an indentation there – the V40’s ornamentation is very Mattin, whether overseen by the man himself or not.

However, the V40 was always among the more convincing products of this overall rather unfortunate episode in Volvo design and has avoided turning into an embarrassment since. This R-Line model’s pseudo diffusor, the flamboyant surfacing and overall ‘sporty’ flair of the car never were and still are not in keeping with the Volvo brand however.

On the move, and despite its Ford (lack of?) pedigree, the V40 quickly betrays where its inherent Swedishness is very much intact and where it isn’t. The almost BMW M-thick steering wheel and its rather dynamic operation are not what one would usually associate with cars from Gothenburg – yet the fine weighting and calibration (as in: an instinctive feeling of mechanical interaction being established) were appreciated regardless. The responsive, easily modulated throttle and very grippy brakes scored equally high.

Yet even after a few kilometres on the Autobahn, and even more so after a numbing 10.5 hour trek from Freiburg back home to Hamburg, the Volvo’s true Unique Selling Proposition made itself very apparent indeed: The seats. 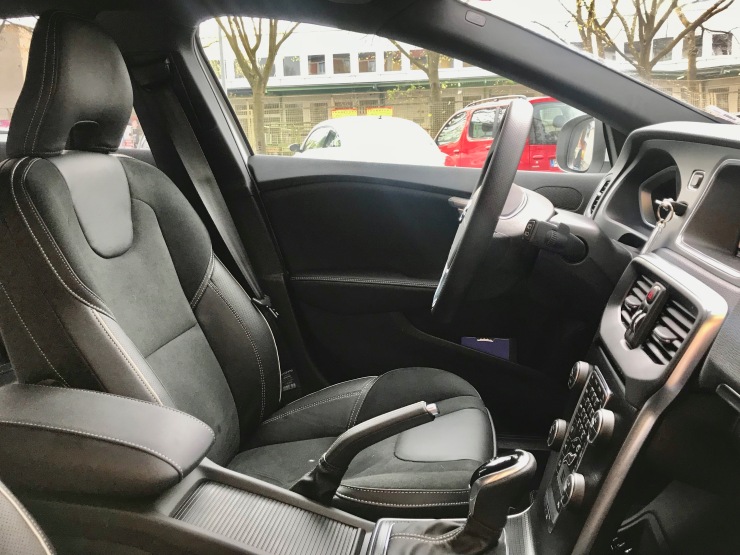 Seats are often rendered ancillary features, next to the fundamentals of good car design and engineering, such as suspension, engine, steering, passive & active safety. Yet the Volvo illustrates how significant a car’s seats actually are – after all, the bare bones of any automobile would be motorised seating with some shelter from the elements (and other traffic, of course).

What the Volvo’s outstanding seats do, apart from reminding one of the value of good ergonomics and orthopaedic consideration, is to make the chairs of almost any other car I’ve sampled over the years, at almost any price point, appear wanting. Wanting in comfort, wanting in terms of anatomical correctness, wanting simply in terms of overall sophistication.

The slightly overdone trim of this V40 (leatherette, alcantara & plenty of contrasting stitching) did very little to distract from their fundamental rightness. And even if there ever was a concern about their visual appearance, this was quickly wiped away by the complete absence of any numb bum I typically experience after the usual three hours or so of driving (or considerably earlier, in the Ford Fiesta Vignale’s case). Particularly during our taxing return trip home, which involved more than three hours of stop & go traffic, the Volvo’s seats were nothing short of a true boon. 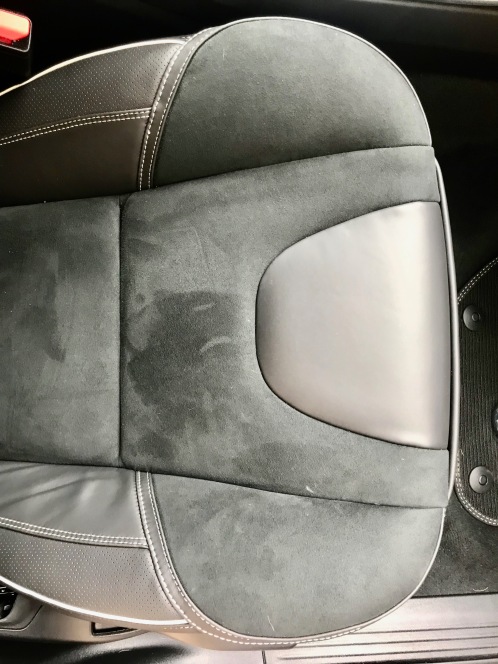 The rest of the cabin cannot hope to match the seats’ impact (figuratively speaking, of course), but still fares better than its age would suggest.

The infotainment interface is rather peculiar, in that it’s operated entirely by rotary selectors and buttons in a not completely logical set-up that’s confined to the dashboard, rather than the more logical & ergonomic placement on the central tunnel. It also responds to inputs with a noticeable lag. That being said, the sat-nav’s real-time traffic/TMC function worked very well indeed – more so than quite a few more up-to-date systems’.

The V40’s instruments are digital, but on this instance, that’s not a worry, as the graphics are straightforward, with the only gimmick being the current range of speed being highlighted, which does help the visual uptake of the information provided by the gauge.

Despite the absence of the nannying systems introduced to some fanfare with the V40 in 2012 (lane departure warning et al) in this specimen, the digital gauges acted as a reminder of Volvo’s heritage as the safety brand in the automotive field. Which made the car’s very poor outward visibility all the more grating, as caused by its ridiculously thick D-pilar in particular.

Apart from this significant shortcoming, the V40’s cabin is a rather decent place in which to cross countries. Material quality is okay, even if the plastics used on the lower parts are considerably less solid-feeling than those placed on top of the dashboard and door cards. The trim on the centre console/dashboard was rather mean, but its use thankfully restricted to just that one area. It appeared all the more grating though as the strip of metal surrounding it (with no visible gap or seam!) – just like the graphically dubious, but very pleasant-to-the-touch decoration around the door handles – is a very satisfying piece of upmarket decorum.

In the back row, the Volvo somewhat disappoints though with small windows and the inability to accommodate my 1.91-metre frame, for which the un-Volvo-like sporty silhouette ought to be blamed. The much shorter dog made no such complaints, however.

After having crossed Germany twice, the overall list of complaints regarding the V40 was surprisingly short. Its 150 horsepower engine wasn’t terribly spirited, but showed what difference (a lack of) weight can make – the more powerful VW Tiguan certainly felt a lot more sluggish than the Volvo, which also consumed less fuel (about seven litres per 100 kilometres on average). The Swede’s ride quality was decent, albeit on the firm side. Its automatic gear box worked seamlessly, without exception. And the awful outward visibility and huge turning circle only became annoyingly apparent in inner-city driving.

And then, of course, there were those seats. Sometimes, a feature one usually takes for granted impresses to such an extent that almost any other shortcoming would be forgiven. This was one such instance. Thankfully though, the rest of the car wasn’t terrible, either.

8 thoughts on “Munchin’ Miles With The Volvo V40”