Here at the gateway to the wilds of West Cork, we welcome more than our share of visitors from foreign lands. This mostly pleasant state of affairs affords us a degree of human variety which would be otherwise denied our pale, light averse, predominantly sandblasted natives. It also lends itself to a degree of automotive variety which to a dedicated driven to writer can prove something of a godsend.

However, not all such encounters are as timely or fortuitous as today’s. Having touched at some length earlier this week upon the lore of the Tychy White Hen, to encounter one in three dimensions proved something of a novelty. Although to be strictly accurate, what we’re looking at here is, if anything a grey hen – or in Lancia parlance, Elefantino Blu – a shade particularly redolent of the Shield and Flag’s Sixties heyday.

It would be foolish indeed to deny that the Ypsilon is very much a DTW kind of car. Comparatively rare, mostly derided by the mainstream press, and with rumours of its impending demise being its primary talking point, it is perhaps at least farmyard fowl as hobbyhorse. I will neither attempt to avoid the accusation, nor defend it to those who are impervious to the Ypsilon’s charms. One either appreciates these things or one does not.

Being my first encounter with a post-facelift non-Chrysler badged model, I was curious to see how the car stood up visually and to my surprise the answer is surprisingly well. It does help to try and filter out the Lancia badging (albeit, less of an affront that that of the Pentastar), but taken on its own terms, the Ypsilon has aged with a grace I would not have anticipated.

Instead of appearing hopelessly dated, the styling now seems almost timeless, but moreover, for a car of its size, it looks like little else. It’s comparatively easy from this perspective to see why people still buy them – there is a charm to the little Lancia’s appearance which has almost entirely been excised from cars of this size and purpose. 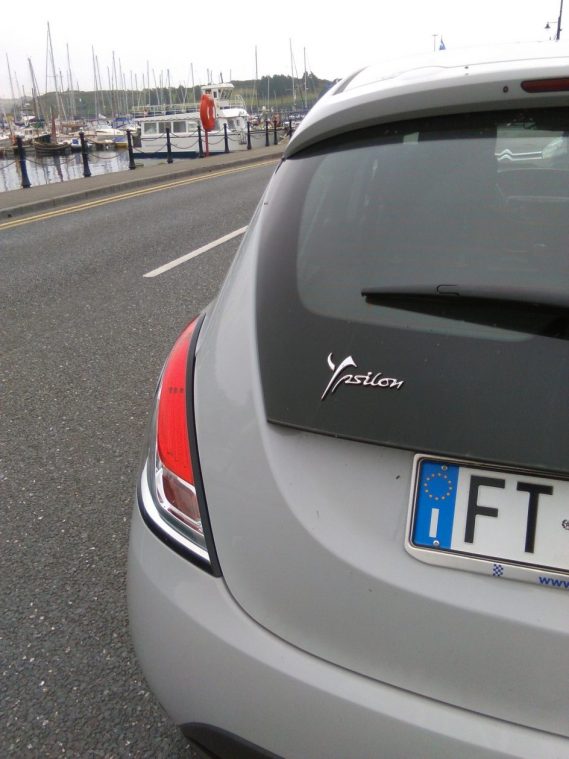 There are lessons to be learned here – lessons Mike Manley and his FCA cohorts would do well to study well. Why is this car still selling and outselling newer, more up to date, more contemporary cars? Maybe it has something to do with a combination of virtues which speak to a certain sensibility and are embodied in a design which eschews overt aggression, instead majoring on a more effortless sense of couture style.

Our German correspondent made a valid point earlier in the week. FCA potentially have within their grasp a sub-brand which could with little effort out DS, PSA’s underperforming upmarket offering – in select markets at least. Lancia must die – it’s beyond all hope of saving and like helpless relatives, impotent and bereft at the bedside of a terminally ill loved-one, we can only wish for the agony to cease, so that we can begin to mourn and in the fullness of time, heal.

But perhaps the Ypsilon deserves to live on – beyond the lifespan of the white, grey or indeed black hen at least. There is clearly a constituency for it and (incentives aside), these are volumes not to be given away lightly. Olivier François really ought to be looking forensically at this car’s numbers, and assuming the man has any market nous, he will be.

But in the absence of any positive moves in that direction, the sole consolation we can draw upon is the grim pleasure in tracking the White Hen’s continued durability in the face of almost insurmountable odds. And celebrating its infrequent appearances upon our doorstep.