Our Sheffield correspondent’s urgent mission for Myristica fragrans is disrupted by something shiny and yellow.

Gulp. Sharp intake of breath. No, not because talking to the salesman makes me nervous but my first design review for this oftentimes design-centric website. If you have yet to see my takes on design, prepare to be deflated. I like what I see. Well, sometimes. Then again, sometimes I’m horrified by what’s presented in front of me. But in this particular instance I liked – a lot.

An errand into town forced me past the row of car dealerships that inhabit the fringes of town. Virtually every make is available within a three mile corridor and if you can’t find something to intrigue you or at least make you veer off your everyday trajectory then there is little hope. Admittedly there is nothing truly exotic but I can’t see Bugatti or Rolls Royce setting up shop in my vicinity any time soon. Too many ne’er do wells. Not quite enough filthy lucre.

Thus a posh Toyota branch lured me in on a gorgeous August morn. Some nutmeg was urgently required, and a mercy dash to retrieve some was enacted. Fortunately I had conveniently left my mobile phone in a safe place; my locker at work, thus no chance of being traced for the precious minutes between my leaving and subsequent return with said nut.

Allow me to explain. I wasn’t out to purchase nutmeg: nutmeg is a euphemism for when my wife needs something more desperately than air. My errand was irritating, time consuming, banal. Preferring to look on the brighter side meant a cheeky wee stop at the dealership. Hardly adultery.

I’d seen the LC500 about a week previously and made a mental note to investigate. Luckily the car maintained a presence on the forecourt and with no time like the present I pulled in, parked up and became a nosy Parker.

A silly aside now. When’re we are travelling together and spot any kind of yellow car on the road, except a Nissan Juke for reasons that shall become clearer, we shout Yellow Car! Thus my first impressions were that of wonder. Porsche’s are ten a penny. Ferrari too has quite a following and most weekends sees one either burbling past in desperate need of a petrol station.

But a Lexus LC500? when do you see one of those? Other than the internet or Autocar, did you ever see one pulling up at the supermarket or the multiplex cinema? I’m probably being flippant there, this is not a car for attempting to squeeze in a weekly shop. It is a car with which to impress a lady though the typically aged demographic purchaser will not be in the first flush of youth. And she probably isn’t all that bothered either.

The LC500 is different, to me avant-garde and mightily more impressive than its cost rival peers, the 911, the Yorkshire sports car Audi R8 (it’s how we pronounce hello…) any high end Merc or BMW. It screams nonconformity and for that I applaud. Not just for the colour either though Naples yellow works for me. Later research shows copper to be stylistically pleasing. And whilst the LC may not have the cache of the Stuttgart machine or its hyper-aggressive cousin from Ingolstadt it does have the air of the individual. Which is nice.

The car’s overall shape delights me. Those front lights act like blades and I’m certain will pierce the dark whilst looking cool. Those rear haunches are fabulous and the blade theme continues with those rear lights. Have to say that the blade strikes that flow from the A pillar to rear and hold up the carbon fibre roof are probably my favourite part. It looks fast when sitting on the forecourt which is surely what the designer of these cars was striving for. The wheels have a nice style with suitably enormous discs and de rigeur monikered brake pads though mine would be red. If you’re gonna stand out, STAND OUT. The costs for that would no doubt make one Blanche.

As for specific areas of design, radii and the like, these I leave to the more educated of eye. I’m a bit belt and braces in that regard. If I like it, so be it. Which leads me back to the Juke which I find most bratachian in any hue, refusing to acknowledge any of when playing our silly game, mentioned earlier. 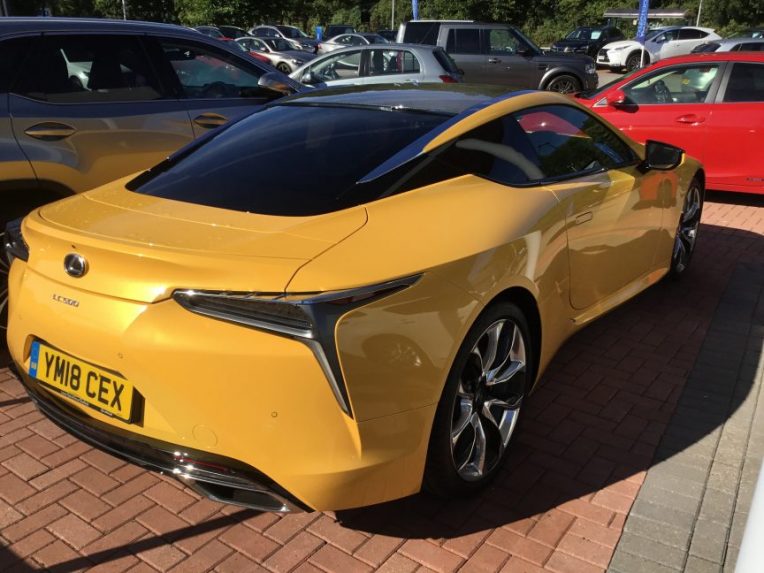 Back to Land of the Rising Sun: would I purchase a LC given the funds? Reports in such as Autocar or any given car websites say its bloated and heavy, the V8 makes a nice noise but doesn’t really shove in the way the benchmark 911 would. In other words, close but no cigar.

Well, I think I would buy one. This one. It’ll do nicely, thank you. There’s even room for that nutmeg. I’d wager no designer ever considered that aspect (although I never asked the salesman…)