We conclude our IAA 2019 coverage by asking, what does a shrinking car show taste like?

Champagnerlaune is a German term describing the feeling of having cause for considerable celebrations. The 2019 Frankfurt motor show featured little of that – and little actual champagne, incidentally.

Unlike the Geneva show, IAA isn’t renowned for being the kind of occasion when supercars are sold on the spot. Which is only part of an explanation as to why no super/ sports car maker attended the German show this year, Porsche excepted, but the explanation as to why there was no champagne available within the confines of Messe Frankfurt.

Avocado was similarly conspicuous by its absence – almost like a metaphor for all those lofty promises the car industry made in recent years, from electrification to autonomous driving. Therefore, the duties of symbolising a lifestyle of health and sustainability were left to the silly hipster garb the fair hosts and hostesses were required to wear at pretty much every car maker’s stand. If there is one sector that had nothing to win and everything to lose at IAA this year, it must have been the sock industry.

Also lost was the generosity with which Mercedes-Benz used to feed the press during the Frankfurt show. In the harsh blue light of a half-empty Festhalle, the lack of quantity, but specifically the dip in quality became obvious in rather chilling a manner. It wasn’t so much the rather awful Bircher Muesli or limp, tasteless breakfast sandwich that drove home the point, but the solemn flair – coupled with the obvious disregard for the hungry reporter. A sensually pure downer to start the day with then – despite the coffee being acceptable.

At Geneva, breakfast at Porsche’s had been as safe a bet as an investment in Swiss Francs, but as if to prove that nothing is truly certain these days, Swabia’s finest had a mean surprise in store. For despite the menu reading almost exactly like what was on offer at Palexpo, the actual food was more early 996 quality than usual Neunelfer solidity.

Hardboiling a poached egg (the 996 overtones are almost too much to bear!) certainly defies the purpose of this method of cooking. On top of that, the yoghurt was too sweet, with the berry compote possessing a rather artificial flavour, while the roast beef sandwich was both chewy and outright lacking in flavour. Again though, the coffee did the job – having a barista can probably be considered common practice now.

Once one had made it past the BMW Concept 4 and into the brand’s crowded, but welcoming lounge, Feinkost Käfer was once again entrusted with serving lunch – and didn’t disappoint. The shrimp cocktail and veal (with potatoes and some kind of Sauce Béchamel) were hardly sensational and slightly on the bland side, but did the trick after the first few hours of heavy walking, staring and discussing. Only the absence of desert was truly lamentable – though that might have arrived after the point when I and my companion had given up waiting for it. 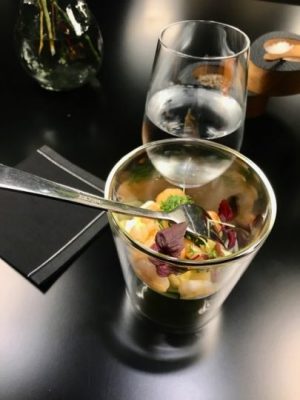 Coffee was consumed at Polestar, where the very kind waiters almost made one forget how terrible the cappuccino tasted. At Jaguar Land Rover, pastries and what was claimed to be tiramisu, but tasted more like some mousse au chocolate-based concoction, were served. The pastries were rather dry, but the non-tiramisu mousse was fine, if a bit on the sweet side.

By quite some extent the finest cappuccino of the show was, somewhat unexpectedly, served at Byton. Very much in keeping with the rather swish stand design (including, inevitably, some retro-vintage-hipster paraphernalia), the coffee was not just serviceable, but of a high standard. Decent beans were prepared using a San Remo Opera espresso machine and served with softly textured frothy milk. More isn’t needed, certainly not at a car show.

The biggest culinary surprise at the Frankfurt show wasn’t Byton’s entry, but a show of quality, flair and sophistication in a context that’s become utterly disassociated with these properties: the IAA show stand of Audi. In order to experience this, one had to pass by the deeply offensive AI:TRAIL concept car – yet the rewards reaped were worth the bravery.

Even before having tasted a single dish, Audi’s wonderful lounge set a surprisingly – and profoundly – glamorous mood. The petrol blue (can that be a coincidence?) carpet and brass coloured accents created an ambience  both inviting and cozy. The fantastic lighting put a great many ambitious restaurants to shame. 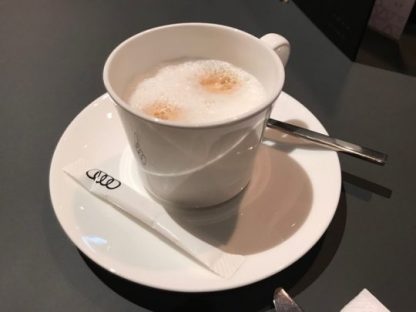 And the food – from a warm, properly buttery croissant to a fluffy omelette, whose filling is daringly seasoned with some tarragon – matches it. So much so that after an excellent breakfast (horrific coffee – as betrayed by the twin piss holes in the foam – excepted), Audi became the choice for lunch too. While the fregola sarda dish was somewhat spoiled by a dominant citric acidity and, especially, too many bitter rocket leaves on top, the veal  – served just with some jus, expertly cooked broccoli and potato puree – was excellent.

The sous vide cooking method, which was originally created to cater for the requirements of on-board dining on French TGV trains, may have become a bit of a joke in fine dining. But at a car show, and in this case, where the veal hasn’t turned into a gelatinous meat pudding, it’s employed most appropriately. And as if that wasn’t quite enough, Audi didn’t skimp on dessert either and served some very pleasing friandises.

Whoever was in charge of Audi’s gastronomical operations at the Frankfurt show should simply be put in charge of the entire company – or at least hold a presentation in front of the executive board. Standards this high haven’t been established and matched elsewhere within Ingolstadt in recent years.

So irony of ironies – of all the companies that decided not to skip this car show, it is the most troubled and most confused that turned out to be its most fabulous host. The 2019 IAA has been a strange, and yet occasionally brilliant experience.