Despite the diminutive profit margins they typically engender, small cars have always been big business for mainstream European carmakers. But finding a recipe that is equally acceptable across pan-European palates is no minor matter. The ongoing mission to craft the required blend of practicality, utility, style and indulgence at a price that will attract the urbanite and rural dweller alike might well be the toughest gig in car design.

Renault landed upon just such a recipe with the original 1992 Twingo, a charming and strikingly designed compact monospace whose distinctive style, the result of Patrick le Quément’s dogged determination to hold true to his vision of ‘instinctive design‘, proved the key to its critical and commercial success. However, despite the Twingo’s acclaimed design and strong sales, by the immediate post-Millennial period, and after a decade on the market, a reinvention was being considered – at least within le Quément’s studio environs.

At the 2005 Geneva motor show, Renault’s advanced design studio displayed the Zoé concept, a smart looking, upmarket compact (3.45m) three-seat hatchback. There were no shortage of expensive features within the Zoé’s cabin, from a system which was said to automatically adjust the music, settings and ambience of the cabin to the driver’s tastes, to an electrically powered, sliding passenger door; a proposed solution to the issues of parking in crowded European cities, not to mention a more elegant one to that chosen by their PSA rivals.

A delightfully neat, well ordered design, concept Zoé’s styling theme is richly expressed, from the clean, confident frontal aspect, the expressive headlamp treatment, with its eyeshadow motif, defined, largely unadorned flanks, panoramic windscreen and canopy, to the distinctive C-pillar and rear screen-cum-hatch arrangement. In many respects, it prefigured much of what was laudatory about MINI’s acclaimed Rocketman concept, despite being shown a good six years earlier.

Now it goes without saying that it would have been near-impossible to establish a sound business case for Renault to develop an upmarket urban runabout such as this, given the wafer-thin margins such diminutive cars enjoyed. Nevertheless, there was at least a sound basis for a new-generation Twingo in concept Zoé had the board-level will been there. 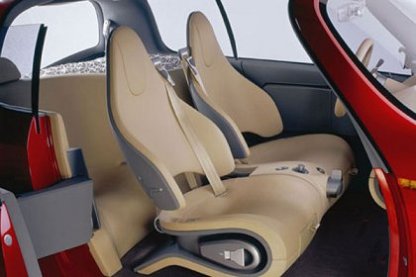 Unfortunately, with CEO, Louis Schweitzer departing that year, it is likely that le Quément’s influence at Renault was beginning to wane. And while in retrospect, one can discern faint reflections of the Zoé’s exterior design in that of the second generation Twingo which arrived in 2007, there can be little coincidence that the neat, if slightly anodyne Twingo 2 was considerably watered down in appearance from the considerably nicer concept we see here, to say nothing of its production predecessor.

What is unavoidable however is that from mid-decade onwards, production Renault designs were of a considerably more normative stripe to that of their predecessors, a matter which is highly unlikely to have been Renault’s esteemed design chief’s preference or intent.

Looking at concept Zoé now, one cannot help being struck rather forcibly by the shift in aesthetics over the intervening decade and a half. It’s impossible to imagine anything this calm and visually correct getting past even the render stage now. Not assertive enough. Even the eventual production ZOE EV, a design le Quément is believed to have overseen prior to his retirement in 2009, is a vastly different visual proposition – if an undoubtedly attractive one in its own right.

So as the platonic ideal of the small, intelligent car now recedes from sight, we cast a regretful eye backwards. It’s bad manners to shout.