As Suzuki prepares more Kei car retro-conceptual joy for Tokyo, we dip into their toybox. Gosh it’s fluffy in there…

Scribed within the official automotive aficionado manual, [chapter 37, paragraph 8, subclause 14.7] is the injunction that both interest and enthusiasm for that unique Japanese phenomenon, the keijidōsha, or light vehicle is a prerequisite for full and unfettered admission.

Here at DTW, we’re not exactly slavish in our fealty to motor-enthusiast norms, tropes or mores, so it would, you might imagine be in our purview to take a less than conventional position on the subject. Believe me, we tried, but faced with such an unrelenting tsunami of Kwaii, it takes a very firm resolve indeed not to succumb to the Kei-car’s cuddly embrace.

Somebody really ought to write a comprehensive history of the keijidōsha, which not only would explore the background, the semantics and the culture that informs this incredibly diverse and fecund motoring genus, but provides a comprehensive compendium of the makes, models, concepts and derivations. But in the absence of such a tome, perhaps we can make something of a stab at building an approximation of one on these pages.

As we can all probably agree, nobody does retro in quite as convincing a manner as the Japanese, and in the land of the rising sun, few exponents of the art better it than Kei-car specialists, Suzuki and Daihatsu.

Today’s subject was previewed by Suzuki at the 2005 Tokyo motor show. An almost unbearably cute retro confection, the LC concept was powered by one of Hamanagun’s off-the-shelf 660cc triples, coupled to a four-speed automatic transmission. Given that there was probably no real intent towards production, further details remain sparse, but one assumes the regular production Kei-car parts bin was plundered accordingly.

But unlike Nissan’s Figaro (in whose idiom the LC clearly fits), which was after all more akin to a sushi platter in design-inspirational terms, the Suzuki can trace its lineage directly to a model from its own back catalogue – the 1967 Fronte 360. A development of the 1962 Suzulight Fronte, the 360’s three cylinder, triple carburettor two stroke power unit was rear mounted. Capacity was either 356cc for the domestic market or 475cc for export. Outputs were unsurprisingly modest. Suspension was independent at each end.

Styling was a notable advance upon its decidedly upright and dated looking predecessor, with a marked shift to a more voluptuous aesthetic form, so much so that it was alleged to have been dubbed “queen of the Kei’s” by Suzuki’s marketeers. Yet despite this they also emphasised the Fronte’s sporty nature (including a Nardi-style steering wheel), not to mention the largest cabin in its class.

It’s a delightful looking little thing with a notable Italianate character to its appearance (as so many Japanese designs from this era possessed) and certainly puts Fiat’s rather plump-looking 850 to shame – in visual terms at least. 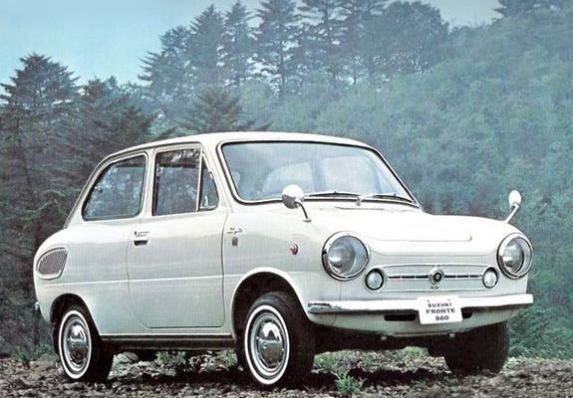 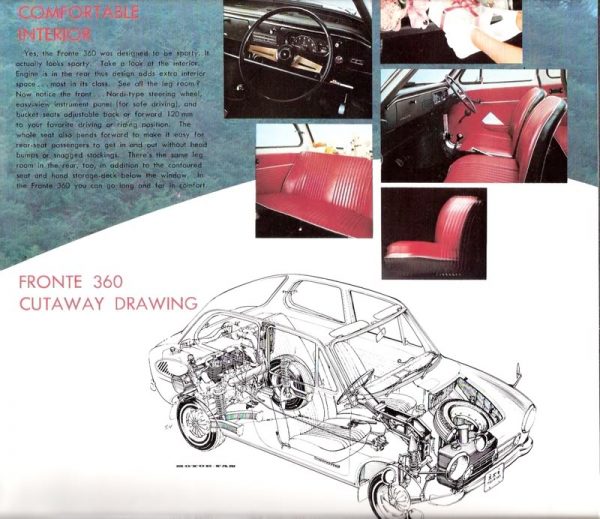 Demand for the Fronte 360 is believed to have outstripped projections, with production having to be almost tripled to cope. Over its 1967 – 1970 production run, something in the region of 280,000 360s found enthusiastic homes. It would not be until the advent of the 1979 Fronte/ Alto that the model line abandoned the rear engine layout and two-stroke powerplant for a by then conventional front-transverse four-stroke triple.

Today’s Alto Keijidōsha (now in its eighth generation) is a direct, distant and somewhat less distinctive descendant, which seems a pity.

Which brings us to the forthcoming Tokyo show, where amongst the studies being prepared by Suzuki is the Waku SPO concept, another overtly retro coupé confection. According to some sources, its styling is believed also to have been influenced by the ’67 Fronte, although if so, it’s been subsumed beneath its more obvious (to these eyes), if far more recent reference point – 2015’s Mighty Deck concept. But the deeper into the Keijidōsha universe you penetrate, you discover that little, even concepts such as retro are what they might first seem.