In the last instalment we had a short introduction to this neglected car. Today we will take a deeper glance at the car’s inception.

Of all the material reviewed for this essay, the text quoted at the start of the previous instalment was the most thought-provoking. Clearly the 604 was viewed as a credible car with a bright future ahead of it.

Today the 604 is remembered, if it is remembered, not for its refined solidity, the remarkable ride quality or, as Motor Trend wrote, its reordering of priorities around comfort, quality, roadholding and safety. It’s remembered for rust and listed as one of the world’s worst cars in Craig Cheetham’s 2006 book and its triumphs forgotten.

History is written to suit the winners, even if the winners didn’t seem to win at the time. In 1977 the 604 trumped the Mercedes 280E and BMW 728. The BMW was marked down for nearly everything including poor interior room, a poor ride and unsatisfactory design. But it survived its drubbing and evolved into a benchmark in the luxury car class.

The 280E was not as roomy nor as smooth riding. Its successors sell in large numbers by defining the standard for efficient executive transport. The 280E and its W123 sisters still survive as one of the most common older cars on our roads. And the winner of the test? The 604 sold in ever smaller numbers over its decade in production; few remain (perhaps 20 in the United Kingdom); and the standard it set was ignored because high-speed handling and relentless acceleration became the yardsticks by which luxury cars were judged.

In 1977 Motor Trend began their first test of the US-market Peugeot 604 SL with a discussion of what constituted a French car. In their opinion French cars, regardless of their price, cossetted the driver and the passengers. They concluded the Peugeot did this to excellent effect.

The magazine also focused on the high quality of Peugeot’s engineering and its conservatism which was of the commendable sort. In essence, in the mid 70s Peugeot was a marque which held a position in France equivalent to that of Mercedes in Germany. The following year the 604 beat the Lancia Gamma and Rover 2600 to the top of the podium in a Car Giant Test. So, at its launch and afterwards, the 604 looked like showing the way forward in defining the standard of a prestigious and competent large car.

The 604 did not spring from a vacuum inside Peugeot’s design office. Economic growth and general prosperity defined the period ending in the oil crisis of 1973. France experienced its trente glorieuse and at the time the 604 was planned it didn’t look like this prosperity was about to falter.

Economic growth was averaging more than 5% a year. Times were good for car manufacturers in Europe. French buyers and those in other countries began demanding more luxurious and larger cars to match their much improved living standards. They wanted something bigger and more prestigious than that which Peugeot was offering.

For Peugeot to neglect this market would have meant seeing customers deserting their 504s and heading to Mercedes showrooms for cars such as the W114 E-class, launched in 1968, or perhaps to see them consider the Citroen DS/ID.

So, taking the esteemed 504 as a starting point to begin their development, Peugeot designed the 604 as an understated, commodious and smooth-riding machine for a more affluent France. The 604 then came to match the conservatism of Mercedes combined with the DS’ legendary ride quality.

Another way to look at the 604 is to see it as an act of corporate patriotism and a chance for Peugeot to take the mantle of “presidential car” from Citroën’s DS. The generous rear accomodation with its comfortable seats and excellent legroom amply provided for the transport needs of the French head of state and other senior government figures. Valery Giscard d’Estaing offered his support, choosing the 604 as his personal car and being seen to do so. His appearance at Peugeot’s stand at the car’s launch must have cheered Peugeot executives. 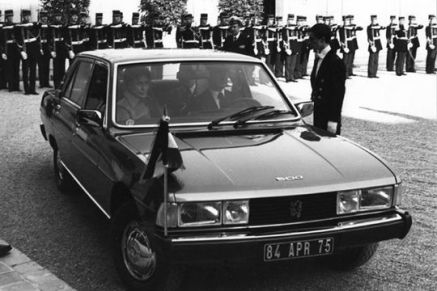 A reference in fiction to a particular car is a useful way to associate common prejudices of the vehicle with that of a character in the narrative. The classic example is James Bond’s pairing with Bentley or Aston Martin. In real life this relationship is reversed: a public figure’s choice of car is of more significance to the manufacturer.

Thus Giscard’s preference for the Peugeot 604 says less about him and more about the car, that it is sober, serious but perhaps, flawed. The picture is muddied by the fact that the other famous face at Peugeot’s stand in 1975 was the renowned clown Achille Zavata. But again, we can read the clown’s respect for the car as reflecting his status and his professionalism, rather than his capacity to fall about and wear face paint.

Inasmuch as the association of the French president with the cars he chooses means anything we may arrive at the following estimation. Giscard seems to have preferred the 604 to the other two possible cars he had on his fleet, the Citroen CX and Renault 30. In A Concise History of France, Roger Price summed up Giscard as patrician and “a very orthodox Finance Minister”. And the Peugeot? Orthodox and patrician sums it up nicely.

One can also read the 604 as epitomising the kind of technocratic conservatism that Giscard himself proposed. His was the presidency of the Minitel, nuclear power and the TGV. But since the 604 was not especially revolutionary, much less so than the CX, one might wonder why he preferred it.

One simple reason is the link between Giscard and the Peugeot family. In the 70s the head of Peugeot, Jacques Calvet, worked with Giscard at the ministry of finance. In the 80s Calvet was the Peugeot family’s financial adviser. And the Peugeot firm itself, mostly distant from Paris and the French government, embodied solid conservative values, more so than Citroen’s radical visions and Renault’s reliance on the state.

The car itself seems made for Giscard: his elegantly tailored clothes (a French interpretation of the English gent) and suave demeanour chime with the imagery Peugeot itself used for its advertising. The castles and smooth lawns where the car was positioned look rather like the kind of surroundings Giscard might naturally have inhabited.

One could suspect the advertising was aimed literally at the man himself. If you wanted to signal that you preferred this vision of France or this self-image, then the 604 was superior to the command-economy Renault and Citroen’s wayward modernity. The car’s sobriety cancelled its expense. It is a vehicle that makes invisible the comfort of its driver and passenger, unlike a Jaguar with its large engines or Mercedes-Benz’s gothic chromed ornamentation.

All of these cultural references were probably lost on the American and British buyers. The advertising chosen for the US market showed a well-groomed couple driving their 604 through the gates of what one assumes is a French chateau but which might very well be an LA mansion or an upstate New York country club. For the class-conscious UK market, the nuances of Frenchness were all but unreadable.

Rather more likely all French cars were symbols of middle-class pretension, being seen as foreign versions of the unreliable vehicles made locally by Leyland, Ford and the Rootes group survivors. You chose French to signal that you had moved beyond white bread, beer and tea, perhaps above all that you had been to the Continent.

In the next instalment we will go back to 1970-something ….