We compare a couture twinset from the tail-end of the GT era.

It’s an incontrovertible fact that the end of the 1960’s marked the apogee of the Gran Tourismo concept, both in design terms and in appeal to the broader swathe of the car market. Certainly by then, the choices available to the upwardly mobile individual who wanted to express their more indulgent side were of the more fecund variety. However, those who couldn’t stretch to large multi-cylinder engines or exclusive nameplates were perhaps less generously served.

Indeed, for those who favoured a less proletarian option than the one offered by Ford’s 1969 Capri, the mid-sized, mid-market choice narrowed down to two contenders from either side of the Alps, both of whom made a simultaneous debut at that year’s Geneva motorshow. This after all was a period that predated the notion that upmarket meant German. If you wanted to look the part, you’d best ensure your suitmaker was Italian.

Lancia planted their Shield and flag in this ground some years previously with the 1961 debut of the Flavia Coupé, a grand turismo variation of Antonio Fessia’s midliner. Sharing its technical felicities with that of the previous year’s berlina, the Pininfarina bodied Coupé shared a good deal of its styling theme with that of the contemporary Ferrari 250 GTE 2+2.

In 1967, the Flavia Berlina underwent a significant overhaul – which to all intents and purposes amounted to a full reskin. In Spring 1969, it was the Coupe’s turn at the scalpel, and while the outgoing car’s Pininfarina author seems lost to history, the remodelled Flavia Coupe had Tom Tjaarda’s imprint well in evidence. Taking the one-off 1963 Lancia 2800 GT Speciale as its basis, the 1969 recasting smoothed out the lines, adding a sense of visual length, while removing some of the more baroque details of the earlier car. 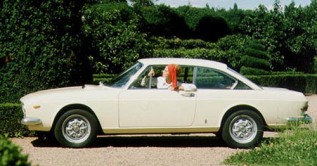 Proportionally, the styling suffered from excessive overhangs – partly a consequence of the overhanging flat-four sitting ahead of the axle line. However, while the revisions to the tail (while retaining a faint reflection of the first series’ cut-down tailfin motif), were broadly a success, the front end lost a good deal of the earlier version’s visual richness.

Technically, it was very much well-honed business as usual – the Flavia comporting itself in a far more impressive manner than its chassis layout might have suggested. Engine capacity was raised to 1991 cc, with or without Kugelfischer fuel injection. A four-speed transmission was standard, with an additional ratio available at extra cost.

The Flavia for some time had this section of the market to itself. Alfa Romeo’s GTV was smaller and more overtly sporting, BMW’s 2000CS, while undoubtedly a rival, was if anything, even more of an acquired taste, while Mercedes’ offering was vastly more expensive and rarefied. But across the Geneva ’69 halls, a sterner rival made its debut. Lacking Lancia’s patrician background perhaps, the Lion of Belfort nevertheless enjoyed a certain provenance, and in the 504 Berline, a fine basis.

Indeed, the 504 was perhaps closer to what a mid-line Lancia ought to have been; rear wheel drive, with sophisticated all-round fully independent suspension, employing a laudatory degree of longitudinal compliance and embodying principles of engineering continuity that perhaps Lancia’s Dr. Fessia might have benefited from, the 504 Coupé presented a stern challenge to the Flavia’s hegemony.

It also looked the part, courtesy of the same Italian tailor. Speaking to chronicler, Antoine Prunet, former Peugeot styling chief, Gérard Welter spoke of the impact of Pininfarina’s proposal upon arrival at Sochaux. “When they unloaded the model and pushed it into the presentation room, we were all left breathless. I looked at it, and to myself I said, ‘superb!’ We studied it at length and without needing to talk it over, decided to industrialise it without any modification. It was – and still is – a really beautiful car.”

Certainly one of Pininfarina’s more elegant Sixties creations, its sobriety of line, married to items of stylistic flair lent it a highly appealing visage – certainly more so than the ever-so-slightly awkward-looking Flavia. Performance-wise, its fuel injected 1976 cc in-line four was at least a match for the Lancia. Interestingly, Pininfarina built both cars at their Grugliasco facility. 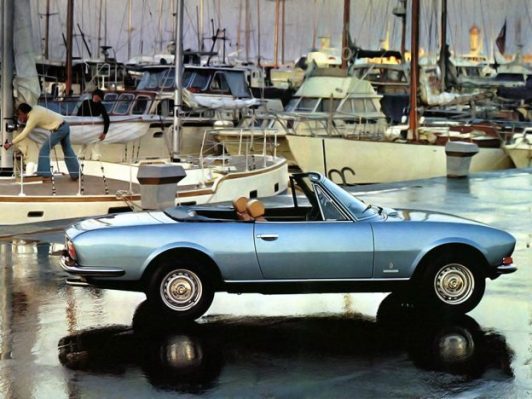 The Flavia name was discontinued in 1971 when the range was streamlined into the 2000 Berlina and Coupé, the latter gaining little of stylistic note prior to its ultimate demise in 1973/4. Unlike the Peugeot however, it was replaced – by 1976’s Gamma Coupé, again by Pininfarina, which in a neat piece of stylistic homage, saw elements of the ’69 Flavia’s tail styling reprised.

The Peugeot on the other hand, outlived the Flavia by almost a decade – the first series cars lasting until 1974, with the second series carrying on until 1979. In 1980, the car received its first significant visual change with the Pininfarina helmed addition of integrated PVC bumpers – body coloured on some versions. This wasn’t the monstrosity it might have been, but nevertheless didn’t really suit the car. In this form the 504 lived out its days before bowing to the inevitable in 1983. The Gamma scarcely lasted longer.

Endings are not always dramatic – sometimes they simply creep up on us. It wasn’t necessarily apparent at the time, but 1969 marked, if not an ending, then the beginning of one. The GT era was passing, and with it an emphasis upon fine tailoring. Not all forward motion is progressive.