A municipal stroll through an Andalucían streetscape elicits a shameful case of neglect.

There’s something almost unbearably sad about a nice car being left to ruin that even a sun-dappled Costa del Sol setting cannot quite assuage. Initially somewhat thrilled by the now ultra-rare sighting of this 1988-1991 era second generation Honda Civic CRX, your (temporarily) Andalucían correspondent’s initial enthusiasm quickly gave way to dismay at the manner in which it’s been maltreated.

The CRX was one of those brief flowerings in coupédom which promised much but somehow fizzled out in the end. While Europe had put all that frivolity behind them during the 1980s, establishing that instead of expensively developed bespoke coupé bodystyles, they could garner as much street credibility, column inches, not to mention profits from creating bespoilered and emboldened hot hatchbacks, their Japanese equivalents chose both approaches, maintaining faith nonetheless with the classic coupé template.

There was of course one fairly compelling reason for this: America, home of the indulgent close-coupled hard-top. Hence, the advent of the Honda CRX in 1984, the most glamourous version of that year’s Honda Civic range which encompassed a shooting-brake style hatchback, four-door Ballade saloon, (née Rover 213), and Shuttle MPV/Estate. Designed with the assistance of Pininfarina (although the final designs were Honda’s own), the Civic range was not only broad, but innovative, technically notable and rather desirable.

Four years later, Honda dreamt it all up again with a new generation Civic series, and while the styling was to some extent merely an evolution of what had gone before, the technical side had once again advanced, with improved multi-valve engines and all wheel double wishbone suspension – unique to this sector of the market.

The original CRX was compact, pretty, pert and well proportioned, but while often a retrograde step, the second generation model was in fact even better looking than its forebear. It’s clear that stylistically, Honda’s designers drank heavily from the Italian carrozzieri, in particular from Zagato and more specifically still, from the ultra-rare 1969 Alfa Romeo 105-Series Junior Z, from which the second generation CRX owed a notable debt. Nevertheless, as homages go, it was a convincing one and furthermore it wasn’t as if the Italian industry was doing much of note themselves at the time. 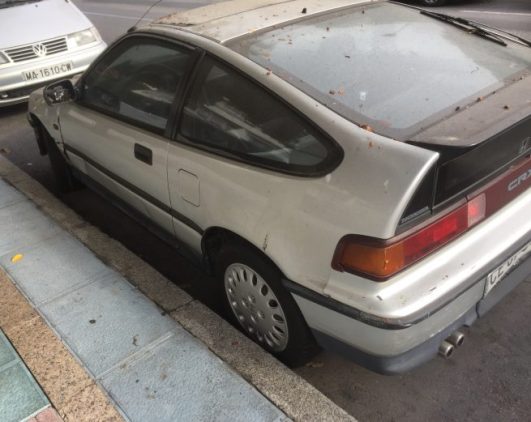 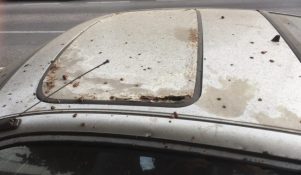 The CRX acquitted itself well, and in 150 bhp VTEC form was something of a giant-killer in performance terms. Also available with 1.5 litre and 1.6 litre engines of varying states of tune, (depending on market) our featured car was most likely fitted with Honda’s 1.6 litre ZC double overhead camshaft engine developing a not shabby 140 bhp – the offset bonnet bulge allegedly being the giveaway here.

While they really ought to be, Japanese cars like these are largely unappreciated in this part of the world (apart from the customising fraternity who prize them) and given the state this example has been allowed to deteriorate into, and despite its almost rust-free appearance (metal sunroof panel excepted) it cannot be much longer for this world.

As our street scenes become increasingly homogenised, rarities like this are fading like fallen orchid blossoms. But in our post-coupé age, cars such as this one – not quite classic, yet past the used-car phase, have become virtual pariahs. This one, by the looks of things, seems unlikely to make it to the next phase. Too far gone, not VTEC enough. 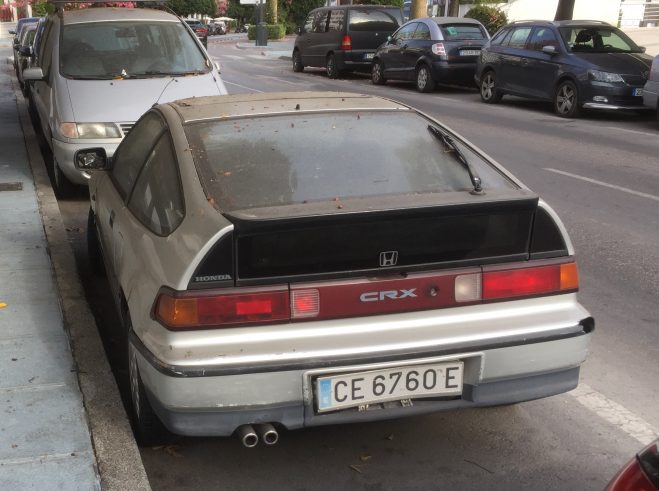 But despite the social contract seeming alive and well in this corner of the European mainland, it’s somewhat disheartening that this CRX owner couldn’t demonstrate a bit more Civic pride.