Your erstwhile correspondent took a short trip to Grenoble recently and couldn’t resist making a report for your edification and delight.

Some semi-interesting things crossed my path while exploring Savoy, part of the western Alps. However, it surprised me that some I cars I expected to see did not turn up. I did my level best to keep my eyes peeled; despite my vigilance I only saw one XM, and a tatty one at that. To be fair, the large older car is scarce in Grenoble. You won’t be amazed that the only examples of such elderly vehicles wore Mercedes badges. Even BMW and Audi didn’t make the cut.

The Vel Satis and 607 represented the last of the big French cars. The Renault proved, as ever, fiendishly hard to photograph. Did they ever sell this car in a lighter colour? They did but they are not in evidence.

Conversely, the 607s I saw were always metallic grey. It looks better as the years go by and I am becoming a stronger admirer of this vehicle. Though I did not photograph them, 406s could be seen on most streets or roving around. Given the car has been out of production for so long, this is a testament to its robustness and utility. I feel more and more certain it’s the W-123 of its era. I expect they will continue to be be in service for some considerable time.

Only one Renault 21 showed up, this one (above) in a very sad condition. If you look inside you can see an old-school French modernist interior of considerable design integrity. The unusual single-stump mounting of the front seats makes for an additional sense of roominess inside the car. The seats don’t seem to sit on two runners but a kind of stalk. Why is that not done today?

The R21 hatchback design still looks to me like the afterthought that it was. It makes me wonder though why the first version was a saloon? Answer, because the 18 was a saloon. The R21 hatch has a whiff of the R16 – I might still prefer it to the saloon now I come to think of it. 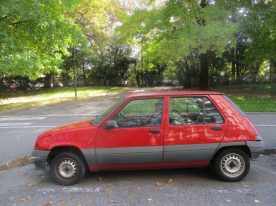 In the world of smaller cars, Peugeot dominate Grenoble’s older car fleet. All of them were five doors versions of the Sacred Number. The Super 5 came a close second, with the red one (above) parked near the 1962 Tour Vercors, a semi-brutalist tower so advanced it looks like the architecture of the mid 1970s. The interior was beautifully fitted out, like a stylish hotel lobby but as a contribution to town planning it can only be called a disaster.

We like Jimnys here and I present three images of them. The one with the cows is an affirmation of the car’s real world value. It is helping to move cows. It is not just out shopping. I have not seen a convertible before (that I can remember) and the beige one looked a treat in downtown Grenoble. That one probably is shopping. And why not?

This C6 is here because the car is parked between the two sets of barriers with about 5 cm at either end. It looks as if the car was pushed in sideways on a trolley rather than parallel parked. It is rather hard to estimate how long this parking operation would have taken.

What I did not see were any new Peugeot 508s. Not one. Something has gone wrong here, I think, as you’d have expected the car to be common enough by now, especially in the home market. When I got back to Denmark I noticed a new Skoda Superb on my street, looking rather imposing and opulent in gleaming black.

This is something like what I expected of a saloon like the 508 and it leads me to consider the possibility that the 508’s rather fussy design has not helped win new buyers and may have alienated those who admire Peugeot’s understatement. All in all though, Peugeot is for me a brand increasing in stature, on the strength of the durability of its older models and the quietly glamorous look of its bechromed current range.

74 thoughts on “Chromed Eyelashes And Fingernails Of Steel”