A flawed masterpiece is still a work of art, as our German correspondent discovers in Maserati’s most comely of four-door models.

Sometimes, one can win the lottery without ever having to enter. As on the occasion of our recent trip to Antwerp, when we weren’t at the mercy of the Rental Car Lottery, but had, thanks to a generous friend, a confirmed reservation for the front seats of a car I’d always admired – the Maserati Quattroporte V, also known as Tipo M139 in marque parlance.

First unveiled in 2003, the Quattroporte V re-established the model at the luxurious end of the performance car market, after its immediate predecessor had gone for a more unusual/contrived positioning. As originally developed by Ferrari, Tipo M139 was initially available only with the kind of sequential gearbox Modenese engineers were besotted with in those days. The inherent clunkiness and appalling lack of refinement of this set-up did little for the sales prospect of a model that was otherwise deemed spot-on for its brand and intended market.

The example we sampled during our 1400 kilometre trip across western Europe was, thankfully, a later Sport GT model, which means it was equipped with a more mundane, yet far more serviceable ZF torque-converter six-speed auto. The Ferrari-based V8 engine’s output remained unchanged though, at 400 hp.

To get the most obvious points out of the way quickly, I feel compelled to mention that I didn’t tire of the Quattroporte’s looks during the week we spent with it. Whether returning to the car from an Autobahn pit stop or approaching it in a car park, its beauty remained striking – particularly when more modern (or rather: current) interpretations of automotive luxury were within view. Obviously, the Maserati is more butch in its appearance than a classic Jaguar XJ, but still exhibits a redolent kind of poised grace. It’s therefore a car I obviously enjoyed being associated with, quite unlike many of the rental cars we’d been using over the past year.

It’s also a car I enjoyed spending time in, as its Poltrona Frau leather, despite being well-worn, still betrayed its exceptional quality, through its touch, feel and scent. The wood also appeared as though it came courtesy of an Italian artisan, rather than Faurecia or Johnson Controls. So flaws and all, the Quattroporte V still felt like a proper luxury item, rather than mundanity covered in gold foil. 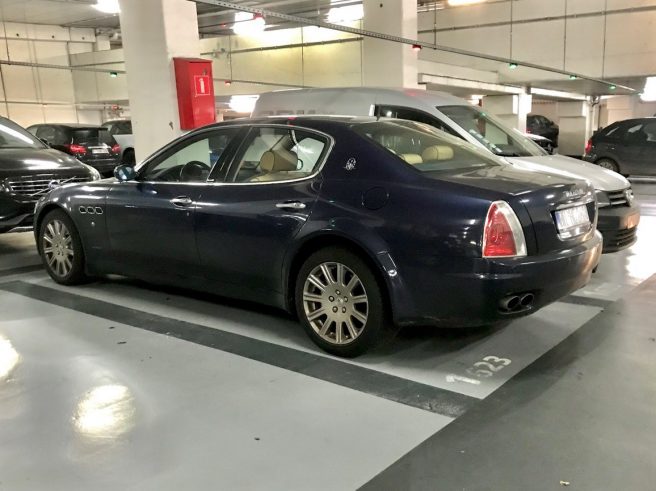 Speaking of flaws, there were many. More than I’d anticipated, in fact. The rain sensor would only trigger the wipers in most cumbersome a fashion – which was fine, since at maximum speed, the right-hand side wiper would inevitably knock against the lower cladding. The automated lights were only barely more predictable. Similarly, the air-con would alternate between rather-too-warm and definitely-too-cold settings on a random basis. The glovebox appeared to be suffering from material fatigue. There was a rattle inside the b-post, right next to my left ear.

On top of these (long-term?) quality issues, there were more than a few inherent shortcomings that became apparent when driving the Maserati for some time. Like the Blaupunkt sat-nav system, which the car’s owner bluntly described as ‘Scheiße’, and was diplomatically rated as being poor, back in the day. From today’s perspective, it’s laughably awful.

In terms of NVH, the Quattroporte also fell well short, owing to more road noise than expected (and occasional wind noise as well, possibly a function of its Lancia Thesis-sourced wing mirrors) and, above all, plenty of engine and transmission vibrations being emanated though the body. To add insult to injury, the Maserati also felt far from potent at regular revs – below 3000 RPM, one could come to the conclusion that its power output is only half the claimed figure.

Next to the stylistically equally accomplished Audi A8 of similar vintage (but decidedly different flair), the Quattroporte V appears hopelessly inept, certainly on the basis of hard facts. The Audi is far better built, more advanced and (when equipped with the 4.2 V8 petrol engine) even feels more powerful than the Italian thoroughbred, despite being some 50 hp short of it, at least at non-Autobahn speeds. 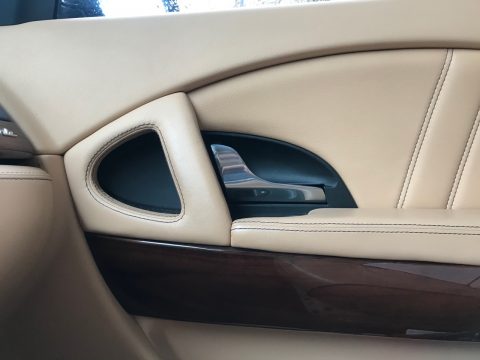 Humans being human though, facts aren’t all that matters. The Maserati V8’s glorious engine note, for example, wouldn’t be included in any comparison chart, but entertains every time it’s audible. The pedigree of the interior’s touchpoints also acts as constant reminder that one is driving a bespoke device, rather than a mass market product. The steering feel betrays the Quattroporte’s performance car roots and adds significantly to the impression of  driving a car much smaller than its more than five metres of length would suggest. Not to mention the way in which that V8 sings above 3000 RPM.

With seemingly half of Germany’s Autobahn network currently comprising of roadworks – and in mostly awful weather, I didn’t even remotely get to test the Maserati’s limits. Nor was I tempted, given it’s not my car and that I had to pay for the petrol myself.

So I mostly ambled through Germany, the Netherlands and Belgium at 130 kph (or significantly less), consuming about 12.5 litres of Super 95 every 100 kilometres, in a car that would rattle and shake at low speeds, and whose oil temperature at such speeds would sink to 70° C, rather than the optimum 90°. I obviously wasn’t using this car, or rather – its engine, the way it was intended, as its cumbersome demeanour at these speeds very much suggested; sometimes accompanied by the clunk of the wiper hitting the lower plastic cladding, always feeling either a bit too cold or a bit too warm. And yet I loved every minute of it.

There is no reasonable way of making a case for the Maserati Quattroporte V. The aforementioned Audi A8 is the better car every regard – except the choice of natural interior materials, steering feel and mostly, ride comfort. The Quattroporte’s turbocharged successor feels infinitely more potent at regular speeds. But the former is a clinical Bauhaus style bungalow to Tipo M139’s impressive, yet cosy Tuscan renaissance villa, whereas the latter, for all its improvements in everyday usability, simply feels like a Chrysler dressed up in posh hides.

Alas it’s difficult to make a case for listening to feelings over facts in today’s day and age, but spending a week with the Maserati Quattroporte V leaves this driver/scribe with no other choice.

All images courtesy of the author.