Weeks after an enjoyable encounter with its underdog estate sibling, the opportunity to sample one of Peugeot’s bestsellers presented itself.

The SUV simply isn’t for me. While I’d never describe myself as an unrealised racing driver, I don’t like the cumbersome way most of these vehicles handle. Aesthetically, the tall, blocky looks typically fail to trigger any desires the way sleeker automotive forms do. I could go on about this, but will spare you the boredom and myself the typing.

So when the friendly Avis clerk told me that I could choose between a Ford Kuga, a VW T-Cross or a Peugeot 5008, I knew this round of rental car roulette wouldn’t end up in my favour. The silver lining to this Sports Utility-shaped cloud being that I’d enjoyed the recent crossing of my home country in a Peugeot 508 SW – obviously, it was the French car that got my nod in the end.

By SUV standards, the 5008 isn’t the most ungainly of beasts, thanks to current Peugeot design touches like the sleek rear lights, which refer back to the glorious 504 coupé/convertible, without appearing like some pastiche, or the simple, but effective brightwork lining the side windows/DLO. The front is rather too grim for my liking, yet Peugeot have a better handle on the ‘matrix’ grille treatment than most, which provides some aesthetic relief. The Suzuki-aping ‘vent’ below the semi-clamshell bonnet remains a bit of an eyesore, however. 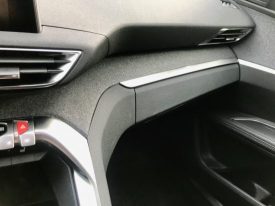 The cabin is more convincing in design terms, unless put into contrast against the 508’s interior. These issues are obviously down to preference and physical build, of course, but to me, the larger car provided the less pleasant environment. This was due to the higher seating position, which resulted in the i-Cockpit’s ergonomics not being as marvellous as I’d experienced them in the lower estate car, where the driver is truly surrounded by the dashboard and central tunnel.

Mostly due to the different seating position (but also the driving itself), I didn’t feel as much at ease in the car and eventually suffered from numb bum syndrome, which I’d been spared in the 508. In terms of ambience, the 5008 was on par with its sibling, as the SUV’s colour and trim was also far above the class average, with the inclusion of some fabric where one would usually expect some fake carbon/faux wood/plastic adding a particularly pleasant touch.

The area where 5008 truly beat 508 was space, of course. Up front this didn’t matter much, but the SUV’s second row of seats obviously provided considerably more cubic centimetres for stretching out than the estate’s, with the sole caveat being the relatively high floor, which makes for a slightly frog-like seating position for taller occupants.

Even these might appreciate the inclusion of two picnic tables however, before being challenged yet again by the electric boot lid, whose open position only allows people shorter than about 1.8 metres to stand up when loading or unloading the cavernous boot. Our luggage (including some precious cargo, in the form of a homemade Black Forest cake) failed to fill it in its entirety, which made the amount of space provided feel ever so slightly excessive for our needs.

During town driving, the diesel engine’s unexpectedly gruff running immediately made itself apparent, just as the ride comfort was clearly different from the 508’s in that it was harsh, rather than firm. The steering was as quick, but didn’t feel quite as precise (which may be a false perception) as the estate car’s, while body control and – surprisingly – NVH properties were considerably below the 508’s standards. This spontaneous impression was confirmed during Autobahn driving, where the 5008’s poor ride comfort turned out to be a constant nuisance.

Despite its ‘sporty’ set-up, the 5008 didn’t invite spirited driving either, owing not just to the unpleasant pendulum effect that comes with most SUVs featuring stiff chassis set-ups – neither my partner nor I enjoy having our torsos and heads constantly swinging. On top of this, the engine didn’t exude a sense of composure at any time, feeling alternatively gutless or overwhelmed by the Peugeot’s large body and weight.

Even being equipped with a decent manual gear box didn’t help its case, as the car seemed sluggish under any circumstances. The Autobahn stretch across the Kasseler Berge certainly never was as burdensome since that time when we’d felt like having to push the particularly feeble VW T-Cross uphill there.

Three days was more than enough time spent with the big Peugeot then. Just as with the VW Tiguan Allspace, I felt a sense of relief when I returned the 5008. Judged against the VW, the Peugeot didn’t fare too badly – it certainly provides quite a bit more flair than the tepid Tiguan in stylistic terms, but its sporting pretensions are inescapably at odds with its basic architecture (though in fairness, the VW is no paragon of comfort either).

Judged against the 508 SW though, and taking into account how infinitely more successful in the marketplace the 5008 has turned out to be, my own disconnect from the current automotive mainstream comes to the fore yet again. For unless I badly needed space for five people and their luggage (which I don’t, and which most motorists do not either), I couldn’t come up with a single reason to choose the taller, bigger, more popular Peugeot. Not in subjective terms (appearance), nor in objective ones (performance).

I clearly have yet to stop worrying and love the SUV.