Reputation can be make or break. Whether it be gained through dynamic prowess, stylistic excellence, or for other, more negative traits, once it has been established, there is little chance of a well orchestrated perception being altered. Certainly by the time production finally ceased, the image of the Rover P4 as stuffy, outdated and overtly conservative had been broadly codified in the consciousness of the press and thereby the public. But it wasn’t always thus.

By the outbreak of the second world war, the Rover motor company was established as the purveyor of finely engineered, upmarket driver’s cars of quality and bearing, favoured by the establishment and by what might have been termed, the professional classes. Dignified, conservative, but by the time hostilities had ceased, somewhat old-fashioned in design and execution.

Like everyone else, Rover’s senior management, led by the Wilks brothers (Maurice and Spencer), were keen to capitalise on the post-war appetite for new cars, both domestically and for export. Unlike many domestic carmakers, who were perfectly content to rehash outdated technology, Rover’s engineering chief, Gordon Bashford was of a more inventive bent, but lacked the financial wherewithal to do much but carry over much of the preceding cars’ hardware.

This was particularly evident in the use of the slow-revving, long-stroke, 75 bhp, 2106 cc in-line six, with its pre-war inlet-over-exhaust valve arrangement, but it was a proven unit and moreover it was all that was available. Bashford also elected to retain a separate body and chassis, which was probably a sensible choice for a relatively small independent carmaker during the late 1940s, especially as the job of refining unitary bodyshells was very much still in its infancy. Suspension by wishbones and coil springs at the front and half-elliptic leaves at the rear was far from the cutting edge either. A freewheel clutch was employed for non-overdrive cars.

Technically then, the P4 was no revolutionary, but its body design on the other hand was of a more progressive mien. Both Bashford and brothers-Wilks had been impressed by the Raymond Loewy inspired design of the 1946 Studebaker Champion/Commander and are believed to have obtained an example for evaluation purposes. There is no doubt that its design subsequently informed the shape of the P4, however there are also similarities with the more compact Singer SM of 1948, but these are probably coincidental.

Like its American muse, the pre-war style of reverse hinged doors were retained at the rear, Rover (unlike Lancia with their 1950 Aurelia), retaining the stout B-pillar for torsional strength. Doors, bonnet and bootlid were aluminium pressings, steel being in short supply during those immediate post-war years.

The frontal styling was perhaps the most striking departure, with all semblance of a traditional grille eschewed for a body-coloured horizontally-barred affair with a large central spotlamp mounted on a chromed plinth – quickly dubbed Cyclops Eye. However, this is believed to have contributed to cooling issues with early cars and was altered in favour of a more conventional arrangement in 1952.

The P4 was introduced at the 1949 Earls Court motor show as the Rover 75 and was hailed for its progressive appearance and for the quality of its construction and build, especially when most British rivals still sported styling features which dated back to the early years of the previous decade.

In 1953, two additional engines were added – a smaller four cylinder Rover 60 and a larger capacity 2.6 litre version of the six for the Rover 90. Later 105R-badged models employed an automatic transmission of Lode Lane’s own design dubbed Roverdrive. This used a fluid flywheel and a vacuum operated plate clutch driving a two-speed (and reverse) gearbox. A third ratio was provided by an overdrive facility. In normal use the car moved off in high gear, the overdrive engaging automatically as speeds increased. Emergency low gear or reverse could be selected by pressing a button on the selector to disengage the clutch. The transmission was not a success however and was subsequently dropped. 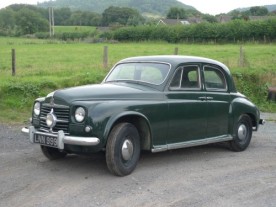 1954 saw the body receiving its only significant stylistic alteration. Carried out under the auspices of lead stylist, David Bache, the rear screen aperture was enlarged considerably, while the entire tail section was raised and squared-off entailing a far larger boot. This had notable practical considerations and to some eyes modernised the shape, but paradoxically, lent it a less athletic silhouette. The P4’s profile (or aerodynamic qualities) were not enhanced either by the subsequent addition of indicator units to the tops of the front wings, outboard of the headlamps.

As the P4 became a familiar sight on UK streets throughout the 1950s, the upright Rover’s styling quickly dated amidst later, more contemporary designs. The ‘Auntie’ soubriquet which would dog the car for most of its life stems from an otherwise laudatory report by Motor Sport’s Denis Jenkinson which was published during this period. But however well meant, mud sticks.

The debut of the larger P5 model in 1958 further compounded the P4’s image, and perhaps in retrospect really ought to have replaced it. By May 1964, when P4 production ceased with over 130,000 examples built, it looked positively antediluvian – especially when viewed next to its 1963 successor, the Citroen DS-inspired P6.

History hasn’t been all that kind to the Rover P4. Dismissed in similar terms as aged spinster aunts once tended to be, its perception conveniently ignores how at its launch in 1949 it was about as progressive a British motor car as it was possible to obtain – this side of a Jowett Javelin at least. Rover, in what would become an unfortunate habit, simply retained the P4, as it would later do with both P5 and P6 models, in production for too long.

Fundamentally a car of immense integrity, durability (P4s do appear to have survived in number) and considerable charm, the fact that one of the “outstanding new cars of 1950” ended its life as something of a running gag illustrates both the pace of change which was taking place throughout the 1950s, and the fickleness of press and the public it informed. One should always respect one’s elders.