A retrospective on the difficult birth and growing pains of BMW’s precocious but troubled child.

This year marks the twentieth anniversary of the launch of the first BMW-era MINI, so it’s an appropriate time to look back over the company’s highs and lows, and to imagine how it might evolve in years to come.

The circumstances that led to BMW’s outright ownership of MINI were, to say the least, rather controversial. After struggling for six years to turn Rover into a viable and sustainable business, BMW threw in the towel in 2000, selling the Land Rover division to Ford and the Rover car business to the Phoenix consortium. Much has already been written about BMW’s management of Rover and I do not intend to revisit those arguments here. Suffice to say, it was a painful and challenging experience for the company, both in terms of outright cost and the management time and effort expended on a venture that was ultimately to fail.

The only significant assets BMW held onto in the fire sale was the MINI brand and Cowley manufacturing plant, later renamed MINI Oxford. The development of the first new-generation R50 MINI was largely completed and BMW saw it as a bright prospect, complementing its own range of cars with a small, but still premium, FWD hatchback.

At the time, BMW was associated with traditional RWD architecture, which was widely perceived to be integral to the marque’s sporting identity. MINI allowed the company to hone its skills in FWD without the risk of tarnishing its storied reputation with its existing customer base. Retaining MINI was, however, a very controversial move, at least in the UK. Many observers characterised it as BMW running off with a treasured family heirloom following an acrimonious divorce from its noble but impoverished British spouse.

That said, any suggestion that BMW got MINI ‘on the cheap’ is simply not supported by the numbers, whether it be the investment BMW made in Rover over six years, including the very expensive development of the bespoke Rover 75, or the generous dowry BMW paid to the Phoenix consortium to take Rover off its hands, the latter allegedly in excess of £500m in the form of cash and an interest-free 49-year loan.

The R50 MINI hatch was launched in late 2000, barely six months after the Rover disposal. It was a neat and compact hatchback, cleverly reprising the style of the 1959 original. The new MINI perfectly captured the ‘Cool Britannia’ zeitgeist of the time with a huge range of personalisation options. The new dealerships had a neon-lit nightclub vibe, wholly unlike the rather clinical white and grey with hints of the brand signature colour that was the industry norm for car showrooms then and now.

The car was very well received in the UK motoring press, but there was already some grumbling from the below-the-line commentariat, still smarting from events earlier that year. This was exacerbated by the fact that the Phoenix Four were still being feted in the mainstream media as the saviour of plucky Rover from the clutches of evil BMW, with more than a hint of xenophobia.

Having taken the decision to sell MINI through a new dealership network, largely independent of BMW, the company was faced with the task of expanding MINI’s range to achieve the sales volumes that would support this network. This was problematic on two fronts: firstly, the historical baggage associated with the MINI name and secondly, BMW’s decision to adhere closely to the design cues of the original car for the R50.

In truth, the 1959 Issigonis Mini wasn’t styled in a conventional sense, but merely wrapped in a body that enclosed the mechanical parts, passenger and luggage accommodation most efficiently within the ten-foot overall length limit stipulated by the designer.

Anyone familiar with Issigonis’ original proposals for larger BMC cars, the XC9001 and XC9002, which became the 1800 and 1100/1300 respectively, will appreciate the difficulty in scaling up the Mini’s unique style. Both these prototypes were rather ungainly, if resolutely functional. The 1800 remained so even in its final production form, while the 1100/1300 was rescued by Pininfarina’s excellent design work.

The R50 hatchback remained in production until 2006, being joined in 2004 by a cabriolet version. The exceptionally pretty R56 replacement was essentially a rebody of the existing mechanical package, with tidier detail styling. It was not until 2007 that a second model, the Clubman, was added to the range.

This was the first hard evidence of the limitations of the styling theme. The profile was elongated and rather van-like, an impression reinforced by the double “barn” doors at the rear. The single rear side passenger door was optimised for LHD markets, a fact quickly picked up by the motoring press and commentariat, some of whom even suggested this implied an anti-British bias! Overall, it looked slightly gauche, especially compared to its very pretty sister. 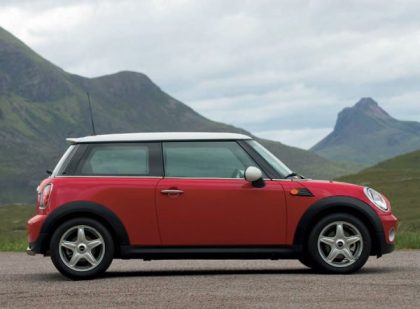 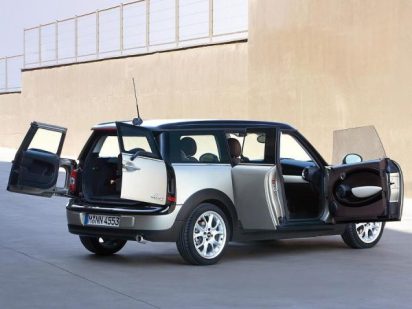 2010 saw the launch of the Countryman, a crossover-style vehicle with optional four-wheel drive. Its design was a straight enlargement of the hatchback, but with five doors. The increase in height gave it a rather slab-sided look, especially so in darker colours. The motoring press were generally positive, but not effusive.

This is where things begin to go awry. The Paceman was introduced in 2012. It was essentially a three-door Countryman, answering a question nobody had asked. In today’s parlance, it was a “Crossover Coupé”, a less practical but supposedly more attractive variant of the Countryman. Well, for my money, MINI scored one out of two in this regard. Worse, like the Countryman, the Paceman was built, not in Britain, but in Graz, Austria, by Magna Steyr, further inflaming grievances in the UK. The motoring press were bemused by the Paceman and certainly unenthusiastic. It died unmourned and unreplaced in 2016.

It is worthy of comment that, after the initial euphoria which greeted the launch of the R50 in 2000, MINI has enjoyed little of the cheerleading that the UK motoring press reserves for Jaguar Land-Rover, another foreign-owned UK motor manufacturer.

I’ve driven the Countryman and Paceman and found both to be rather disappointing. They had nothing of the charm of the hatch. Their interiors were dark and gloomy (although this may have been specific to the trim options chosen for the examples I drove) with some questionable ergonomic choices, particularly the very low-set central toggle switches. There was a surprising amount of road noise penetrating the cabin, possibly a product of their ‘All4’ drivetrains, and neither was much fun to drive.  Looks are, of course, subjective, but neither did much for me.

There followed the Coupé and Roadster in 2011 and 2012 respectively, both two-seater bustle-backed derivatives of the R56 hatchback. MINI was filling more perceived micro-niches in a largely futile attempt to drive up sales. The Coupé was notable mainly for its controversial baseball cap on backwards roofline. Both sold poorly and were discontinued in 2015.

In Part Two, we’ll cover developments in the years from 2014 to the present day, consider MINI’s current situation and imagine how its future might take shape.