There is little question that successive generations of Mercedes-Benz SL would never have come into being without the patronage of the more affluent and socially aspirant United States car buyer. After all, there simply wasn’t a sufficient market for such wilfully indulgent fare in the old world – nor available spaces one imagines on the car-train to Sylt. Also beyond doubt is that by the close of the 1980s, the SL had become the automotive marker of choice for those who really wished to underline their wealth and social status.

While some might argue the modern SL’s family tree is traceable to 1957’s 300SL convertible, the line runs more directly to the smaller and less performance-orientated 190 SL of 1955, which outsold it by a significant margin. 1963’s timeless W113 Pagoda brought forth a more muscular evolution of that template, but its long-lived successor, dubbed R107, which arrived in 1971 would by consequence codify the SL blueprint.

R107 arrived at a fortuitous time, on the right side of a wave of US anti-car legislation, both proposed and enacted, one of which was the banning of all open-topped cars amid fears of injury in roll-over accidents. It was this which led to a swathe of imported Targa-topped semi-convertibles and in some notable cases the cancellation of open models (both domestic and otherwise) entirely. But Mercedes had done their homework, and due in no small part to the efforts of legendary engineer, Bela Barenyi in the arena of passive safety, the well bolstered R107 was demonstrated to be sufficiently crash-worthy.

In the end such legislation was deemed unenforceable, but in the wake of the 1973 fuel crisis and subsequent economic and political uncertainty throughout that decade, a good deal of soul searching took place within Sindelfingen over R107’s replacement, or indeed whether there should be one at all. In what would become a long-term thinktank project beginning in the late ’70s, a team of young designers examined the rationale for a two-seater sports model for the 1990s.

The result of this process, which was a lengthy one even by Mercedes-Benz traditionally thorough standards seems to have established the requirement being one of a broadly iterative car in conceptual terms, albeit one with a good deal of future-proofing built in, not to mention even more accomplished active and passive safety capabilities.

Fuelling the business case for such a model of course was the mid-eighties boom in the US for luxury vehicles, which had lent the now rather aged R107 something of a last hurrah. As the design for the new car, dubbed R129, was argued over in Sindelfingen’s styling studios under the supervision of Bruno Sacco, Josef Gallitzendörfer, and Peter Pfeiffer, the engineering teams set out R129’s technical package.

While the previous car was closely aligned with the W116 S-Class, R129 would derive its hardware from the W124 (E-Class), incorporating its front (struts and lower wishbones) and rear multi-link rear suspension layout, and an additional automatic four-setting ADS adaptive damping system. ASR anti skid control was optional. Power came from entry-level 3.0 litre six-cylinder engines in 12 and DOHC 24-valve form. The 32-valve 5.0 litre V8 developing 322 bhp would however be derived from the Sonderklasse’s M117 unit.

Mercedes engineers went to great pains to isolate sources of vibration into the bodyshell, employing profiled struts with their own vibration damper from the front axle carrier to the doorsills and a tubular arrangement from the rear of the sills to the spare wheelwell. These and other measures ensured that distortion of the SL’s body equalled that of Mercedes’ saloon models – exceptional for an open two-seater.

In marque tradition, all SL’s came with a detachable hardtop in addition to a folding soft roof. This latter feature was electro-hydraulically operated and could be deployed in 30 seconds, the lined hood being almost as quiet in place as the fixed roof. R129 also broke new ground with a retractable roll-over bar, which could either be raised from its normally recumbent position by the driver and used in conjunction with a draught screen for improved comfort, or would deploy automatically upon a number of pre-determined factors where risk of rollover was detected by an array of body-mounted sensors. 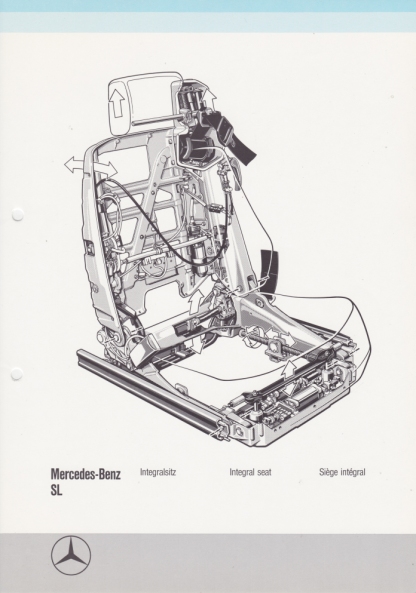 This was demonstrated in the most alarming manner when an inexperienced Japanese guest driver totalled a 500 SL in Portugal during the car’s press launch. The car, which rolled several times, was destroyed, but both occupants were shaken, but unhurt. Further aiding passenger safety were the specifically designed, magnesium framed integral seats, which incorporated the inertia reel seat belt, and electric control of seat position, seatbelt height and headrest position.

Mercedes’ PR made Bruno Sacco’s stylistic vision for the three pointed star crystal clear when it stated, “The design for the new SL is trailblazing and is geared towards the future, anticipating the pace of time. Exotic fancies of shape, condemned to be shortlived, are not in line with this philosophy. Concessions in this respect would have meant to sacrifice the marque identity and the SL image.”

This was borne out in the R129’s exterior style which was largely the work of Johann Tomforde and Dieter Futschik, and took the Sacco doctrine to its logical extreme. Its clean unadorned lines coupled to superb proportioning and a more muscular stance to that of its predecessor, lent it a similar austere grace to that of the existing and much acclaimed saloon stablemates. Compared to the outgoing model’s somewhat chintzy, chrome-laden appearance, R129 with its anodized darkwork was a quantum leap – a high watermark that would not be matched again.

Launched in the wake of a typically thorough (and lengthy) proving regime at the 1989 Geneva show, a long waiting list soon built up, with US dealers hitting prospective customers with a whopping 30% price-premium over that of the outgoing car. Not that they were deterred – SL production at Bremen (capped at 22,000 per annum) being sold-out for well over a year.

Like its predecessor, R129 had few direct rivals, Jaguar’s elderly and inferior XJ-S Convertible being the most obvious, although Cadillac also made a half-baked attempt. But nothing was as sophisticated, desirable or confirmed one’s social arrival like an SL.

1993 saw the SL move into an altogether higher plane with the introduction of a 6.0 litre V12 model developing 389 bhp. Two years later R129 received a minor facelift which to some eyes cleaned up the styling with the removal of the Sacco-Planks along the lower flanks and reshaped, body-coloured bumpers, but in truth, the purity of the original was lost.

Production ceased in 2001 with over 200,000 built. Later that year, the less well-resolved Steve Mattin-credited R230 was introduced, but R129’s true progeny was perhaps 1996’s Michael Mauer designed R170 SLK, the final Sindelfingen flowering of the visually austere Sacco principle. The fall off in design quality after this is both striking as it was precipitous.

We can simply view the R129 as an aesthetic object, a vehicle displaying all requisite signifiers of attainment, ostentation and superiority. We can equally revel in its engineering thoroughness, its rightness for purpose. In either case it is an object of wonder and yes, beauty. Yet the almost Calvinist rectitude with which the SL whispers these attributes is perhaps the most notable (and retrospectively speaking) impressive characteristic of all.

R129 crystallises a moment when the three pointed star of Untertürkheim was at its very apogee, and remains arguably the most perfectly realised of the ‘Sacco-era’ cars and a stark reminder of how far that celestial body has fallen in the intervening time. Because once you have truly arrived, it really isn’t necessary to shout about it.