I don’t usually feel a need to travel to any vintage car shows. I visited Techno Classica in Essen (which was huge, but not terribly pleasant) just once and enjoyed the splendour of Villa d’Este (which is both interesting and off-putting for its detachment from reality) just as many times.

Certain headline-grabbing exhibits, such as some rarely seen one-offs and concept cars, notwithstanding, the repetitive nature of classic car shows makes a visit only appealing to me if it’s convenient – as with the annual Bremen Classic Motorshow, which is just a one-hour train ride away, generally well-organised and good fun. This year however, I elected to give Bremen a pass over the first weekend of February, as Paris beckoned – or more specifically, Rétromobile.

I wasn’t expecting France’s premier classic car show to be like Techno Classica, just with Peugeot 504s instead of Mercedes W123s – but more a French take on the concept of such an event. Something more elegant, maybe a bit more diverse than its German equivalent. On that basis, the trip to Paris promised to be worthwhile.

Paris obviously isn’t Bremen or Essen, but even so, the quality of any car show is measured within its halls, with little regard for what entertainment, flair or culture may beckon from outside its gates. Thankfully, the Parisian Way wasn’t abruptly truncated at Porte de Versailles, but apparent in matters small and large. The dapper appearance of a fair few visitors and the delightful food (which will be covered separately) being among the more obvious local influences, whereas the diversity of cars on show came as something of a surprise.

At Citroën, the GS took pride of place, owing to its 50th anniversary, and deservedly so. To mark the occasion, Citroën unveiled another (very French) courtesy car in the wake of the wonderful CX that now roams the capital’s avenues on behalf of Hôtel de Crillon and its guests. On this occasion, designer Tristan Auer redecorated a GS for Les Bains Hotel, a property originally built as a spa, before it became the French Studio 54 in the late ’70s and eventually a luxury hotel (styled by none other than Monsieur Auer) five years ago.

While not exactly bereft of any charm, the GS’ makeover can’t match the CX’s restrained, yet impactful reinvention. Whereas the grande berline was subtly altered and updated, the GS goes for a more obvious retro vibe, courtesy of the fabrics chosen for the cabin. The cork accents on the dashboard do appear plain jarring, however. If Monsieur Auer ever gets his hands on an XM, he’ll hopefully return to the measured approach chosen for the CX – otherwise those chauffeured in it might get to enjoy a Memphis Style ambience. 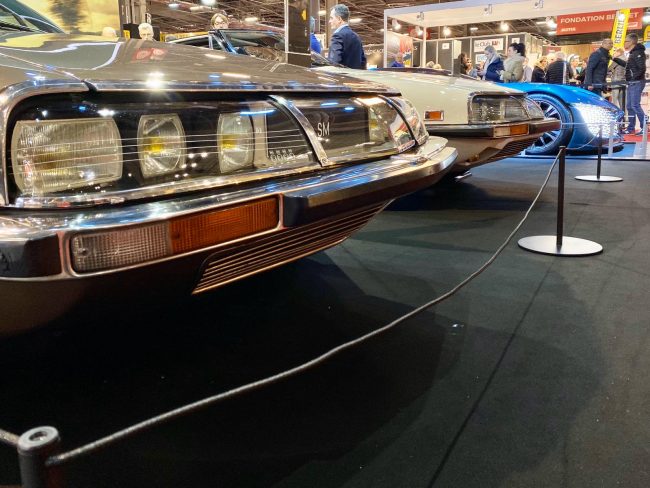 Far more irritating than Tristan Auer’s difficult second album was DS Automobiles’ blatant attempt at adding the Citroën SM to its bloodline. So not only were a handful of Sa Majestés presented under the DS banner, but the numbingly silly DS X E-Tense (whose sense of excess – or would that be X-Èsse®? – even stretches to include its daft moniker) was parked right alongside them, as though it marked some kind of logical progression.

Rather conveniently, DS chief designer, Thierry Métroz, was standing right next to it during opening night, but his smug posturing and my stated intention to be a courteous guest meant I left him in peace and focused on those lovely SMs, while steadfastly ignoring the setting.

Monsieur Métroz wasn’t the only current car designer attending Rétromobile, as many of his French colleagues could also be spotted (with the exception of Renault’s Laurens van den Acker, who might’ve been preoccupied elsewhere). Rather unexpectedly, Audi’s contested chief designer, Marc Lichte, also made a fleeting appearance, which might have increased the rumour mill’s speed, if there were any top design post vacancies at any of the French manufacturers right now. 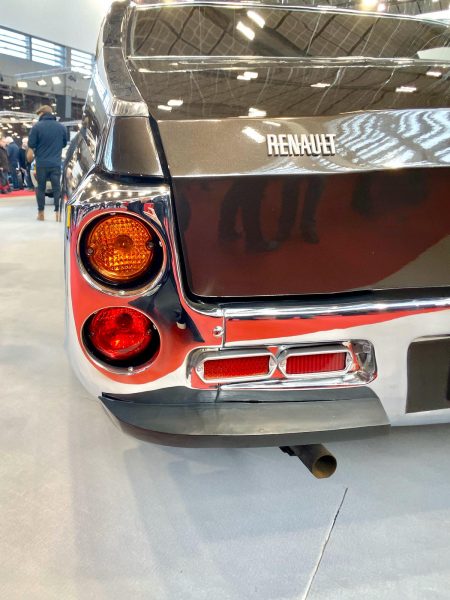 With or without Menheer van den Acker’s attendance, a proper surprise beckoned at Renault’s stand, in the form of Prototype H. This one-off from 1968 was part of a joint Renault-Peugeot project to develop a large saloon and would have been powered by a bespoke V8 engine. But this ambitious Mercedes fighter was eventually cancelled, though the recently restored prototype shown at Rétromobile obviously survived. It’s an intriguing story (told in some detail here) and Renault deserve plenty of credit for making it public.

The actual Prototype H reflects this curious nature with its odd combination of Tatra-like proportions and American flair. Among the many ‘what ifs’ in automotive history, Prototype H is one of those cases when the cancellation was clearly the right decision, hindsight and all.

Speaking of Tatra, special mention needs to go to an exhibition dedicated to the iconic Czech marque. Intriguingly, these idiosyncratic vehicles appeared right at home in the context of a show featuring not just classic Citroëns, but also the odd Voisin – although the awkward appearance of Tatra’s final models also signalled how there are numerous ways for proud, storied names to fall from grace and into oblivion. 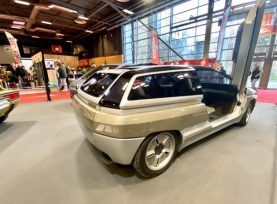 Another most interesting exhibition was staged by ASI, the Italian classic car association that saved a large part of Bertone’s concept car collection from auction some years ago. So next to some better known designs like the Autobianchi Runabout, one could have a thorough look at some of the less famous Bertone concept cars, such as the Gandini-designed Suzuki Go or the Citroën Zabrus (by Marc Deschamps). On a less inspiring note, the utterly insipid Pickster – a BMW-based pick-up/ute from ’98, whose shrill appearance fails to mask the utter absence of good ideas – highlights the downfall of Bertone with a poignancy that could only be topped by a visit to the abandoned Caprie studios.

Given the number of exceptional (road and race) cars on display, as well as the outstanding food on offer at Rétromobile, a quick visit to the car clubs illustrated that not everything is all that different in Paris: Club jackets and curious stand dressing are not alien to the French at all. And neither are some rather peculiar effects of devotion, such as in the case of the Citroën SM club’s showpiece: A white coupé that has been treated to a Maserati Quattroporte’s triple side vents. Thankfully, the hall where most clubs were found provided sufficient distraction from this eyesore, as the Péripherique passes right through it, without causing as much of a faint shudder to the building, even with cars and lorries constantly passing overhead.

Speaking of periphery, Rétromobile entails a fair few events outside the Paris Expo premises (though the timing of SneaCARS is likely to be incidental). Most notable among these is the preview of Bonhams’ Les Grand Marques du Monde au Grand Palais auction, which would be worth a visit even if the lot on show consisted solely of Renault 21s and Peugeot 309s. For the Grand Palais setting itself is as breathtaking a sight as they come, with its huge glass roof, intricate iron construction and supremely lithe Beaux-Arts style taking in all but the most jaded of visitors. 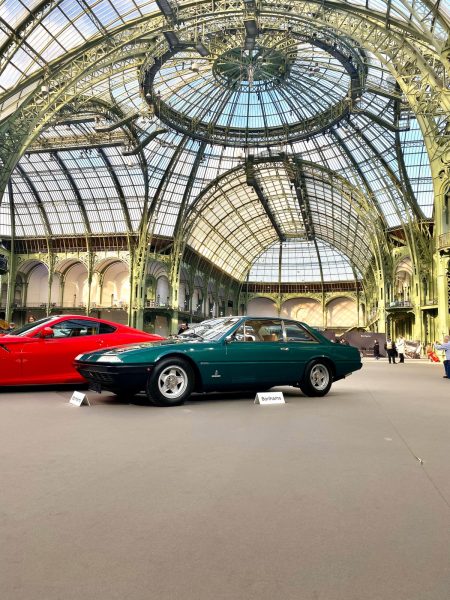 Against this kind of backdrop, any automobile must fight for attention – a challenge the astonishing Voisin C28 Aérosport Coupé (that wasn’t for sale) duly accepted. Other cars following respectfully in its wake were a purple 1915 Rolls-Royce Silver Ghost and a BMW-Glas V8 one-off by Pietro Frua that were worth closer looks for varying reasons. A personal favourite among the more modest fare was a Ferrari 365 GT4 2+2 (or, in simpler terms, a ‘very early 400’) in a delightful shade of verde.

Three days and two nights in Paris taught me that while vintage car shows may not be worth travelling to, a rather spectacular vintage car show in what rightfully is one of the best-loved cities on the planet most certainly is.

All images (unless otherwise stated) : The author