Once Toyota had fixed their new sales horizon firmly upon the United States, there were bound to be some noses put out of joint. More tellingly, there were plenty of takers. Thirty years ago, the LS400 won over the hearts of wealthy Americans along with those seeking a more quality feel to what was otherwise being offered. The recipe was surprisingly simple. High-end engineering, longevity and product quality, be nice to customers at service or repair time. Ford and GM must have been on vacation.

Gaining that foothold in a predominantly stateside motoring landscape, with the Europeans snapping at the ankles, Lexus were refreshingly bold. Sales rattled up, announcing a sea change to the perceived automotive aristocracy. And that pitch continues today with ever more resonance: the vehicles have changed but not the philosophy.

Well, not quite, because while Lexus see themselves as purveyors of quality, luxurious transport these days, they no longer confine themselves to the tarmac roads. Anyone with the means can park their delightful Garnet Red LS, with added kiriko glass embellishments, at the golf course, gun club or shopping mall. But surely better to park this land barge by the harbour wall and hop aboard your Lexus yacht?

Your eyes do not deceive, the posh side of Toyota had wet their first Plimsol line, placed a copy of Boat International by the helm and raised the anchor, course set for those lucrative waters but three years ago.

The Sport Yacht Concept was dreamt up by Lexus Design, engineered by Toyota Marine Division with help from respected boat builders, Marquis-Larson, based in Pulaski, Wisconsin. At 42 feet long, with hand laid carbon fibre, vacuum-infused no less, with a coating of two-part polyurethane resin. But the interesting bit are the engines. Note the plural; two V8 5 litre mills, as found in the LC500 which, in marine trim pump out 885 horsepower. That shifts this tub to 49mph. It can also seat eight in luxury with full multimedia and hand-crafted everything. Neat. Even won an award at the International Japanese Boat Show in early 2018 and sparked an interest in bigger, more opulent cruising style yachts as opposed to sprinters.

Why, look there able seaman Hanks. Gently manoeuvring in to harbour is the LY 650 Luxury Yacht. With a base price of $3.74M (floating up to the full works at $4.85M – form that queue…) It’s based on the Sport Yacht and then turned up, well, higher. Clear it is not what your extra eight hundred thousand adorns your yacht with; a Midas touch perhaps? 65 metres long, using Lexus defined L-finesse, a design language based on Takumi, it would be easy for our American friends to slide out of that garnet LS and on to the deck of this yacht, head out to the island hideaway and contemplate his navel. Well, why wouldn’t you?

Powered this time not by Lexus’ own but using that other occasional car builder-cum Marine experts, Volvo Penta IPS engines, resulting in a more RX-Yacht than LC-schooner, the LY 650 maintains swift, ocean going speeds but with a larger turning circle. Well, you gotta compromise something, even at this level. Not really, for those engines can be had in three states on trim. Will the 1050 hp do, sir? What about an upgrade to the 1200 or the top 1350hp to get that forty tonne tub up to nigh on forty knots? Marine gas prices? Pah! 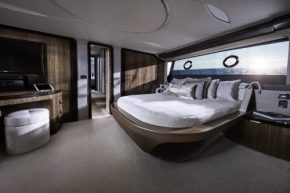 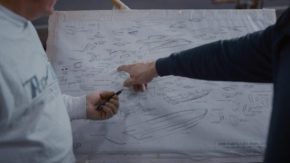 A significant six metre wide beam at the yachts aft section affords plenty of wriggle room. Car inspired details include a stainless steel chafing plate on the bow along with both window frames and air inlets with the Lexus “L” shape. Continuing with a Mark Levinson sound system on the bridge and the three berth cabins, air conditioning, more kiriko glass, real wood trim and even room for staff. Well, you wouldn’t want to pour your own raki now? And who would do the cleanup job when the ocean invariably turns choppy?

President Akio Toyoda states the yacht to be “the challenge Lexus has taken on to symbolise our application to become a true luxury brand, venturing beyond the automobile. As a mobility company we are pursuing new possibilities that include the ocean.”

Which is all fine and dandy but smacks rather like all those other brands wanting to diversify into other luxury and seemingly lucrative (shipping) lanes. When Lexus first appeared and the American businessman was lured into the Japanese web of engineering excellence, their cars stood out for reasons discussed in-depth on this website in earlier episodes.

You can’t blame Lexus for wanting to go fishing (sorry) in this ultra-high end market but for me it doesn’t quite sit right. Personally admiring the LC500 is one thing. Swanning about on the waters off Miami, Monte-Carlo or Morecombe is quite another. In fact, this yacht could be hailed as being almost Docker-like…

8 thoughts on “Got The Car? Get The Yacht”