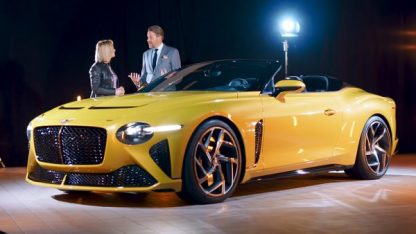 Bentley’s CEO Adrian Hallmark welcomes us to a walk around the Crewe flagship of flagship showrooms. With the former Top & Fifth Gear presenter, Vicki Butler Henderson firmly by his side the conversation flows rather pleasantly. Eloquence, we are reminded, is a more important precondition for career success in Britain than in other European countries.

We are not quite finished thinking these thoughts, when the presentation turns to the coach-built Bentley Bacalar and its similarly overstyled designer, Stefan Sielaff. If one were to conduct a study on the varieties of German accents, GIMS wouldn’t be a bad place to start.

In the post-Motor Show Age, charismatic CEOs will rise in value.

McLaren decided to turn the event into a celebration for the entire company. Stuffed into the nooks and crannies of McLaren’s Woking headquarters, it seems like the entire staff has gathered to witness the event. The crowds are cheering on BBC News anchor Kate Silverton, whose hairstyle I am sure has received more than enough attention already, and McLaren CEO Mike Flewitt as they announce the start of “the first ever McLaren Motor Show”.

Mr Flewitt doesn’t miss the opportunity to thank the gathered company staff for the successes of the past year, a nice gesture. Old and new models are praised with a mixed bag of attributes from the marketing dictionary before the rather shy McLaren chief test driver takes to the stage and lets us envy him for a few minutes for what must be quite the dream job. 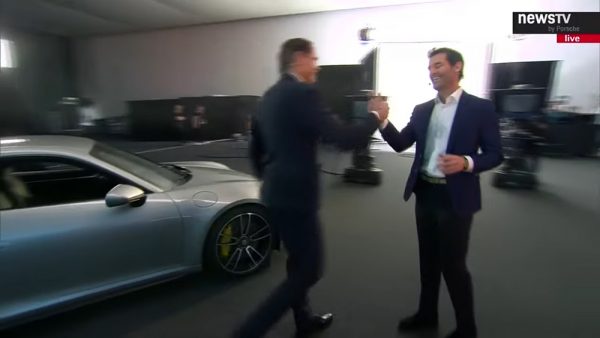 Instead of a quota-saving female presenter, Porsche chose to have their show hosted by former racing driver and brand ambassador Mark Webber. Of course, neither racing credentials, nor being the head of a major German car brand, equate to public speaking talent. The conversation with CEO Oliver Blume about the new Porsche 911 Turbo seems, with all due respect, rather rehearsed. Matters become more fluid when Frank-Steffen Walliser, Vice President of the 911 and 718 product line takes over and proves that not all German car executives need to be sent to Story Telling School over the summer.

A strong product can make up for a weak presentation.

Like its British peers, Aston Martin greets us in a showroom attached to the company’s headquarters. Yet, it takes a moment for the viewer to be sure to not have accidentally tuned into a sequel to The Godfather. Mr. Stroll’s air, near perfectly completed with pinstriped suit, pocket square and sleek grey hair, will make anybody with Mafia boss ambitions between Sicily and New Jersey look pale by comparison.

Apart from this rather superficial observation, the Aston Martin presentation raises another, more important eyebrow. Who is this intended for? Consumers? Journalists? Investors? Aston Martin mostly seems to address the latter group. Yet, what Mr Lawrence reads from the teleprompter, by the looks of it, possibly at gunpoint, sounds not unlike the captain of the Titanic attempting to reassure the passengers that the ship isn’t sinking, just as the hull starts breaking in two. This is unlikely to convince anybody; journalists, consumers, or investors, that Aston Martin is a sound company.

Would you buy a used car from Tony Soprano?

Finally, the French contribution rounds off this relentless GIMS broadcast. The overall flavour reaching us from Paris is refreshingly different and indeed very French. Subtitles? Quoi?

DS’s opening shot shows a gigantic French flag wrapped around a female mannequin’s body, before the camera turns to DS’s new Directrice Général, Béatrice Foucher. And voilà, all other attempts to create an illusion of gender balance we witnessed today, appear futile in comparison.

Madame Foucher goes on to take us inside a secretive studio, where we are awaited by the brand new DS 9. There, in what may be the most theatrical scene of the day, suddenly one of the rear door’s of the car flings open and a DS designer climbs out of the backseat. As much as he tries, none of his subsequent explanations about this supposed new flagship model can answer the question the stands in the room like an elephant: What right does it have to wear the DS badge?

A reminder that the we should expect more from the French than a DS 9.

Shouldn’t it be possible to present a car in a more appealing way than a smartphone? Well, not one of the presentations we have been given throughout the Geneva virtual press days has lived up to this benchmark.

Instead of inspiring stories, we have encountered an industry stuck in the past and in the midst of an identity crisis. Do car manufacturers still know why they do what they do? Do they have a vision that can carry their organisation into the future?

If so, we didn’t get to see it today. Instead we were overwhelmingly presented with generic marketing fluff that is not going to inspire many to share it with their friends, seek a job in the automotive industry, let alone buy a new car.

The same presentations given as intended at Geneva’s Palexpo would have been equally boring. The journalists would have sat through them, just to politely never speak a word of them again. The internet of course, is less forgiving. The view counters on the respective YouTube channels establishes the lack of interest in any of these videos as a fact. Most struggle to reach 10k views.

Lacking interest in cars cannot be cited as the reason for this meagre turnout. Third party YouTube channels harvest millions of views by translating the same press statements into only slightly more appealing video clips. Along the way, manufacturers lose control of the message, and miss the opportunity to build a direct connection with the audience.

The 2020 Geneva Motor Show is the moment for manufacturers to realize that they are missing an enormous opportunity. Properly embraced, re-inventing the product presentation could create much more than just a buzz on social media. It could instill a desperately needed, renewed sense of purpose into the disorientated, soul-searching organisations we have encountered today. Have they received the memo?

Founder & editor of www.TRANSPORTMUSEUM.net, an online-only museum for aesthetic, strategic & historic reflections on how to move people & things from A to B. View all posts by Lukas von Rantzau