Thousands of motorists owe their lives to one man’s quest to design safer motor cars. We pay tribute to a engineering pioneer.

The Mercedes-Benz legend was built on principles of engineering excellence; its reputation founded upon the work of legendary engineers, names which include Fritz Nallinger, Josef Müller and Rudolph Uhlenhaut. However, there is another name – one to whom every motorist ought perhaps to say a silent prayer of thanks – that of Béla Viktor Karl Barényi, engineer, inventor, known to some as the lifesaver. Over a lengthy career, primarily at Mercedes-Benz, his innovations led to more than 2500 patents, some of which have gone on to save countless thousands of lives.

Born in Hirtenberg near Vienna in March 1907 to one of Austria’s wealthiest families, Béla Barényi grew up amid the dawn of the motor car. Automobiles were a part of his life from an early age, his family owning an Austro-Daimler, which he is said to have adored. But fate and geopolitics would change his life dramatically, the combination of the Great War (in which his father was killed) and the ensuing depression which saw his family’s fortune dwindle, meant he was forced to drop out of school, as his family could no longer pay his fees.

In 1924 Barényi enrolled as an engineering student at the Viennese Technical College of Mechanical and Electrical Engineering. Here in 1924/25 he created sketches for a modernist, streamlined rear-engined car, which would prove remarkable in its prescience. Indeed, later in his career, in a legal case which took place over three years, a decision was made in his favour, demonstrating that he was indeed the intellectual father of the basic design of what would become the Volkswagen.

Having graduated in 1926, Barényi found it difficult to obtain full-time work in depression-era Austria, the 1929 financial crash only making matters worse. For a decade or so he survived on temporary contracts and freelance work, before finally being offered a position with the Gesellschaft für technischen Fortschritt (GETEFO, Society for Technical Progress) in Berlin, where he was responsible for the registration of 150 patents, including one in 1937, for a ‘Vehicle with Three Part Body Shell’. However, in 1939, he was once again made redundant.

Despondent, he applied to Mercedes-Benz and on his second attempt, was interviewed by Chairman, Wilhem Haspel. Barényi, seizing his chance, is said to have spelled out in no uncertain terms what he thought was wrong with Mercedes-Benz’s engineering, and what he could bring to the table. Impressed by his passion, keen mind and forthright manner, Haspel is believed to have offered him a job there and then, exclaiming, “Mr Barényi, you are fifteen to twenty years ahead of your time. You will be put under a bell jar in Sindelfingen. Everything you invent will go straight to the patent department.”

Barényi’s career at Stuttgart would be interrupted by the outbreak of hostilities and the somewhat febrile environment of the immediate post-war era, but by 1948 he was back in Sindelfingen’s experimental department, as busy as ever, alongside chief body engineer, Karl Wilfert, heading Mercedes’ efforts in what would later become termed, passive safety. Earlier in his studies, Barényi had discerned that in the event of an accident, kinetic energy when dissipated by progressive deformation, would result in reduced harm to the centre cell, where the occupants were contained.

Therefore, in 1951 he registered patent DBP 854.157 which resulted in what he called the “safety-enhanced body”. This would form the structural basis for a new series of Mercedes saloons which entered production in September 1959, known internally as the W 111 model series or fintail. A new terminology would also enter the lexicon – the crumple zone. 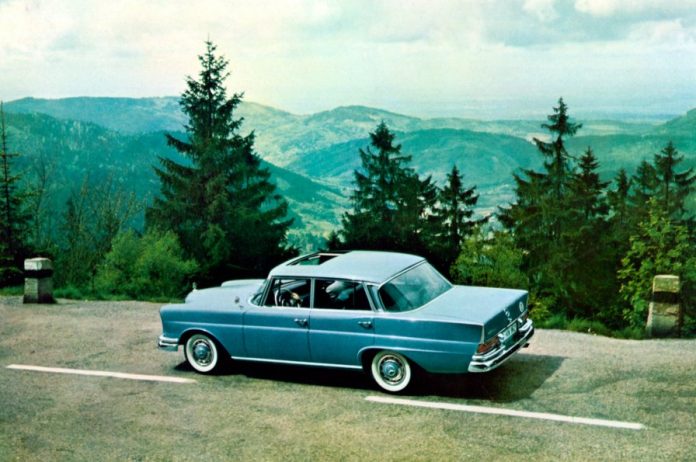 That some month, Barényi’s engineers carried out a crash test using a full-sized car – the first of thousands which would subsequently take place. The W111 Heckflosse would prove a landmark in motor car design, employing a host of safety-related innovations which would subsequently become universal. These included the wedge pin door lock design, which prevented the doors from being forced open during impacts, and the first use of retractable seat belts. Complementing this was the soft interior design, with a lack of sharp-edged controls, the steering wheel with a large padded impact plate and plastically deforming structural element positioned between the impact absorber and steering column.

Barényi would over the years become responsible for a wealth of innovations and patents, which would encompass the Ponton body, and Pagaoda roof of the W113 SL; from the deformable steering column, to the disappearing windscreen wiper. In 1966, Barényi, working in conjunction with Mercedes’ Board Director of Development, Hans Scherenberg, separated automobile safety in two primary areas – active and passive safety – a stratification which has since become the industry standard.

Another innovation which Barényi enacted saw Mercedes-Benz engineers employ data taken from actual traffic accidents which involved their cars. Since 1969, his department both analysed and carried out reconstructions of real-world crashes. Further to this was the enactment of a programme of experimental safety vehicles, which began in the early 1970s, as part of worldwide research programme. Of more than 30 ESVs designed by Mercedes-Benz to research future automotive safety systems, the company presented four vehicles based on the 114 and 116 model series to the public, culminating in 1974 in a version of the W116 S-Class which debuted driver airbags, Anti-lock brakes and belt tensioners, all of which were features of the production W126 series of 1979.

Béla Barényi retired from Mercedes-Benz in 1972, having left a legacy of design innovation and technical rigour which would see the carmaker maintain its pre-eminent position as a technical and safety pioneer for decades to come. The cars which followed in the latter 1970s and ’80s, many of which he had played a part in developing, are rightly lauded as amongst the finest cars ever to have emerged from Stuttgart-Sindelfingen and remain landmarks in the progression of the motor car.

But despite the innumerable honours subsequently bestowed upon him, and the fact that he was featured in a ’90s Mercedes commercial highlighting the carmaker’s ongoing commitment to safety, he remained one of the lesser known automotive figures. Barényi passed away in Böblingen near Stuttgart in 1997 and with him went an ethos which placed serious-minded craft and the pursuit of excellence above other more worldly considerations. Just how far those exacting standards had slipped would soon become embarrassingly apparent, but certainly, while Barényi was in place, Mercedes’ pre-eminence in this area lay unchallenged.

Safety is a tough sell, but when your cars are as superbly engineered as Mercedes-Benz’s once were, it simply came as part of the package. Béla Barényi did not work alone, but his genius made the star of Sindelfingen shine that much brighter.