GM’s expansion to become a global company had largely been built on acquisitions: Opel and Vauxhall in Europe, Holden in Australia and Daewoo’s automotive business in South Korea. These companies continued to operate with a high degree of autonomy in product design and engineering. It was argued that this enabled the companies to remain close to their local markets and deliver products tailored to each’s needs.

However, as the automobile market became ever more globalised and the cost of development increased rapidly, GM realised that it was expending an enormous amount of duplicated effort and associated costs to produce increasingly similar vehicles.

Efforts to globalise product development were already well underway when Lutz arrived in 2001. The first fruit of this effort was the 2002 Epsilon I platform, which was used globally as the basis for Chevrolet, Opel/Vauxhall and Holden models, the second-generation Saab 9-3 and even the Cadillac BLS, supposedly named in Lutz’s honour!

Lutz lobbied hard for a further centralisation of global design and development, as well as the purchase of parts from outside suppliers, to maximise the opportunity to negotiate volume discounts. He faced strong resistance from the regional business heads who feared the loss of autonomy and authority this would entail. Supported by Wagoner, Lutz won the argument and GM’s second global vehicle architecture was the 2008 Epsilon II platform, on which was based the US and Chinese market fifth generation Buick Regal, the Chevrolet Vectra and the first generation European and Australasian Opel/Vauxhall and Holden Insignia.

However, behind the scenes, there remained interminable arguments about how the development costs should be shared, as the regional businesses remained in control of their own budgets. This remained the case when Lutz left GM in 2010. Lutz was frustrated by all the negative press directed towards GM, particularly in light of its continual praise of Toyota. The Japanese company had gained hugely positive publicity for its launch of the first hybrid Prius in 1997, a car that was adopted by Hollywood stars as emblematic of their environmental consciousness.

Meanwhile GM had launched its first electric vehicle, the EV1, available in small numbers and only on lease. These relatively primitive vehicles were extraordinarily expensive to maintain and, with losses on the programme approaching $1Bn, Wagoner decided in 2003 not to renew the leases and call in the vehicles, which caused outrage amongst users. To avoid liability if the vehicles ever returned to the road, Wagoner ordered the majority to be crushed. The only ones spared were to be museum exhibits. This was a PR disaster for GM. Worse, it coincided with the launch of the Hummer H2, a vehicle that was immediately demonised by the press and environmental campaigners for its apparent profligacy.

GM did produce a hybrid system, jointly developed with Daimler-Chrysler and BMW, for its full-size trucks and SUVs. The company argued that this is where the greatest fuel savings were to be made, but the market and press reaction was lukewarm: the fuel consumption the hybridised full-size vehicles was reduced by 25% but was still pretty heavy in absolute terms. Behind the scenes, GM had an active fuel cell development programme, but the date for bringing this technology to market was a (rolling) decade in the future and the press regarded it as a smokescreen for the company’s lack of activity on Hybrids and EVs.

It was against this hostile background the Lutz pushed for the development of what would become the Chevrolet Volt and Opel/Vauxhall Ampera. The fuel cell development team were antipathetic, fearing that it would create doubts as to the viability of their work. Wagoner, burnt by the EV1 fiasco, was also sceptical.

The dam broke with Tesla’s Launch of its EV roadster in 2008. Here was an EV, powered by 6,835 lithium-Ion laptop batteries, that proved the viability of the power source. Lutz secured Wagoner’s agreement to investigate the concept further. However, he was persuaded that a wholly electric car would still have too short a range and the battery pack too expensive for it to be viable.

The compromise was a ‘sequential’ hybrid, a car that would run solely on battery power for up to 40 miles. The Prius is a ‘parallel’ hybrid, where both power sources run together for optimal performance and range. Sequential hybrids are less efficient, but Lutz was convinced that the Volt’s USP would be its near silent electric-only running for all shorter journeys. The car would be marketed, not as a hybrid, but as an ‘extended range EV’. 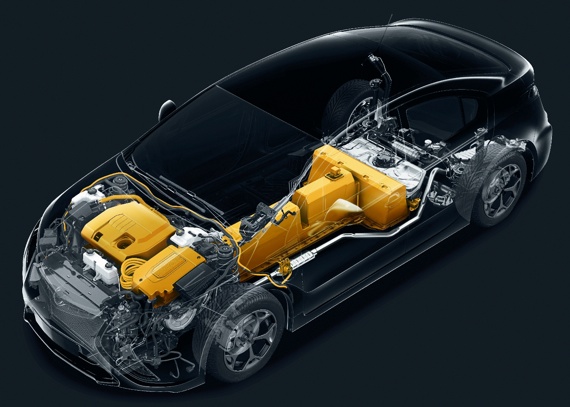 A concept was presented at the Detroit Motor Show in 2007 where it was greeted with great enthusiasm. Toyota, apparently wrong-footed, publicly questioned the safety of lithium-ion batteries in this application, pointing to evidence that, under certain circumstances these batteries were a fire risk. The Japanese company even intimated that GM would never build the Volt, that it was merely a publicity stunt.

GM moved ahead with the project. The production Volt was, of necessity, based on an existing GM platform, that of the Chevrolet Cruze. The production model was far less dramatic than the concept and this caused a rather muted, anticlimactic reception when it was launched in 2011. Sceptics highlighted its limited 40-mile electric-only range while ignoring its ICE-powered capabilities.

GM, having been through Chapter 11 bankruptcy and a government rescue, was an object of hate for those on the political right, who branded the Volt a ‘socialist government folly’. Notwithstanding all of this, Lutz was convinced the car would be successful and a pathfinder for future GM vehicles.

In the fifth and final part of this series, we’ll examine the causes and impact of bankruptcy and a US government rescue on GM.