Guilty pleasures: We all have them but usually they’re tucked away deep – embarrassment or face-saving proving too strong a reason for them to flourish. Only recently, my guarding firewall gave way, allowing a fissure to appear and hotter temperatures to rise, potentially leaving me well and truly in hot water. If only with the DTW readership.

Being neither plutocrat nor a continent crosser, what drives this inner desire I crave for luxury motoring? Can anyone with a sense of humility or the merest hint of environmental sympathy consider the purchase of such a vehicle without embarrassment?

A beast inside, creating those rising temperatures unequivocally says yes, do so. Therefore, all I need are the means for such a transaction. A crowdfunding attempt along the vein of “ordinary car enthusiast fancies luxury motoring. Will pay for own insurance and fuel. Thanks.” Sure to work.

Let’s plug that fissure with a leaden and concrete core, hoping it will withstand the pressure whilst we seek the origins of this species. Today, we’d call it a skunkworks plan but back in 1952, designer J.P. Blatchley along with engineer Ivan Evernden happened on an idea to further Bentley’s grand touring, two door coupé credentials. The R-Type Continental was a sales success allowing those with means to travel in supreme comfort at 100mph. One wonders where you could achieve such speeds back in the days of black and white and no motorways.

Bentley were always keen to provide a rolling chassis to the coach building fraternity, giving the likes of Park Ward, James Young and of course, HJ Mulliner a chance to make their considerable mark. It was the latter who brought not only the four door shape to life but also the name of the Flying Spur. Mulliner’s Managing Director was Arthur Talbot Johnstone whose Scottish Borders roots were strong. The radiator of their first incarnation had the Flying Spur badge, and the name and style continued. Of the 432 S1 Continental’s made, just under half had their names given by the Clan Johnstone.

With its 4.9 litre straight six engine wafting out 180bhp lasting but a year, for ‘59 the V8 arrived. With six point three litres of urge, you could own this grand touring giant for just over eight grand – around ten times the UK average wage back then. With Crewe’s own efforts gaining approval, the days of the coach builder were numbered, 1965 heralding the new unitary bodied T Series of vehicles. By no means was this the end for Mulliner.

Tied also to Rolls-Royce until the eventual split brought about by Wolfsburg and the Bavarians, Mulliner were installed into the Crewe works becoming Bentley’s own personalised creators to the over-remunerated. The Flying Spur name though lay dormant until 1995 when the googly eyed, Phaeton twinned, Dirk van Braeckel version arrived. I vaguely remember a Top Gear episode one winter’s night when James May tested the car out in the heat of Dubai. It wasn’t particularly memorable.

Becoming more so, this D1, Luc Donckerwolcke design (with exterior additions by Sangyup Lee) lasted six years, 2013-2019. A more sober and for something over five metres long, slightly less imposing saloon, maintaining the four eyes frontispiece though in a more jocular manner. Presence with a pleasing stance. And my particular focus is on this, early production model. Garnering a real-world look after a Scottish dousing, (this car being for sale in Glasgow).

Knocking my usual pejorative stance of grey in to the weeds, this hue is named by Bentley as Thunder. “I drive a W12 Flying Spur in Thunder” sounds fine by me. The Beluga black leather interior instils the imposing look but, as one would expect, it is beautifully ordained. I dearly wish to toggle the organ stops whilst sat in a 50mph contra-flowed traffic jam.

There are within me strong yearnings to check the Breitling by Bentley clock to see if I’ll be late for work. I seek the unbridled comfort of those diamond patterned stitched cosseting seat and feel the knurled adjustors. In reality, my main focus is that smooth, almost surreal amount of power emanating from that double-six engine. 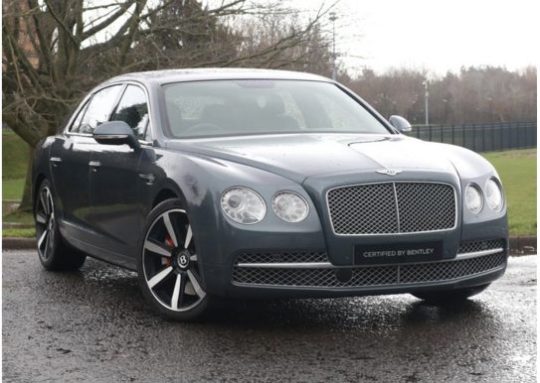 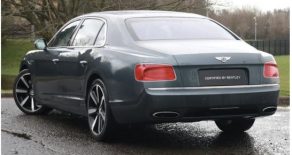 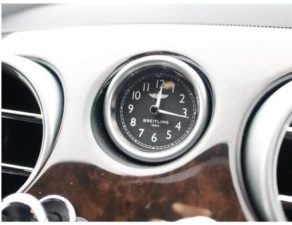 As it’s our American brethren who have vouched for the benefits of cubic capacity in the recent past, my imagination runs wild with what sensations over 600bhp (and 800 Newton Metres) can generate in a four door express.  Several large steam locomotives, together working at full pelt; an accomplished choir that raises the church roof, a boiling geyser from the earth’s depths.

Bathed in serene comfort along with either a taut silence or your favourite choice of rousing tune – for me, Handel’s Water Music driving in the (Scottish) Border country, minus the Johnstone clan’s heraldic device – seeking the nearest fuel station with great haste

Cooling my ardour with an ice-cold shower; costs. Omitting the obvious purchasing price (£54k * for a third-hand Bentley? The original owner shelling out considerably north of £130,000…making this a bargain) the petrol and depreciation alone are going to be astronomical. Never have Bentley been for the common or garden chap, more the land owning brigadier.

With enough power under that elongated bonnet to cater to your entire street’s central heating needs (and enough spare for the hot water), my lust for that all corrupting power must lay dormant. With that, time for a hot drink, along with the guilty pleasure of a biscuit. Let’s make it a chocolate one.

* Since first researching the Spur, this very car has had its price reduced by four grand and in its seven years, deprecated by approximately ninety. Ouch.