In 1970 Triumph had a decade to live. Two cars combined that year to bookend its saloon swansong.

It wasn’t apparent at the time, but 1970 marked the close of Triumph’s expansionist ambitions, and the beginning of its fall. Not that the fortunes of the carmaker prior to its undignified end under British Leyland had exactly been characterised by unbroken success – quite the contrary in fact. But for one short decade, the name of Triumph burned brightly before being snuffed out through a combination of self-harm and corporate politics.

Following their 1960 acquisition of the Standard-Triumph business, Leyland Motors invested heavily in the Triumph marque, rendering the Standard nameplate to the history books. Amongst the most significant fruits of this investment was seen in 1965 when the compact and technically sophisticated front-wheel drive 1300 (Ajax) saloon was introduced.

Leading light behind all of Canley’s 1960s designs was chief engineer, Harry Webster, who had established a fruitful working relationship with Giovanni Michelotti’s eponymous carrozzeria in Turin. Responsible for the skin lines of the Herald, the 2000 Saloon, and the TR4 sportscar, Michelotti’s Ajax design, intentionally redolent of the larger 2000 was a fine example of contemporary car styling. Fortuitously so, as matters would turn out.

By the close of the decade, it was felt that a move upmarket was necessary, especially now that Triumph sat uneasily within the BLMC car giant, which incorporated BMC’s associated marques. Ajax therefore was nose and tail-lifted to lend it a more upmarket and up to date air, while technically, it would retain the longitudinal front-wheel drive layout, with the gearbox and final drive mounted beneath, although unlike BMC’s technical director, his Canley equivalent eschewed a shared oil supply.

Power came from a further enlarged version of the long-running Standard in-line OHV four, with a capacity of 1494 cc, developing a rather underwhelming 61 bhp, (identical to the 1296 cc version) but with an improved torque output. While front suspension (wishbones/struts) was largely unchanged, the rear end abandoned the 1300’s semi-trailing arms for a dead beam axle, which was engineered under the auspices of Webster’s replacement, Spen King – a pragmatist who took the view that the outgoing layout simply didn’t offer sufficient advantages to justify the expense.

Stylistically, the 1500 received a remodelled nose, with dual headlamps and a bisected grille treatment. Aft, the tail was also lengthened, with new horizontal tail lamp units. Inside, a revised woodgrain dashboard and door trims (along similar lines to that of the revised 1969 (Innsbruck) 2000/2500 saloons) was fitted. All in all, Michelotti’s revisions lent the car a more upmarket aura.

When Ajax was first conceived, it had been envisaged that it would replace the entry-level Herald model. However, as costs escalated, and the Herald (which had a slow start) began to take off, it was decided to repurpose the 1300 as a more upmarket model. Now, as the Herald began to fade, the same dilemma reimposed itself. The FWD 1300 was too costly to be sold at a lower price point, but it represented a market in which Triumph management, rightly or wrongly, wished to maintain a presence.

So while Ajax was being upgraded, a separate programme was enacted to re-engineer the bodyshell for a rear-wheel drive layout, incorporating the existing RWD Triumph drivetrain with a much-simplified live rear axle. The smaller car would therefore become a curious hybrid of a simplified 1500 nose, the shared central section and shorter Ajax tail. Unique to the model would be its two-door bodyshell.

Launched simultaneously in 1970, the Toledo would feature a single carburettor version of the 1296 cc unit from the 1300 developing 58 bhp. Mechanical and interior specification was pared back to keep costs down, so brakes were drums all round, and the cabin was a more austere affair than that of its larger siblings. It was however, still a step up from most rivals. The Toledo didn’t set the sales charts alight, but built up a steady clientele of upgrading Herald owners and those who wanted something a small cut above the norm. 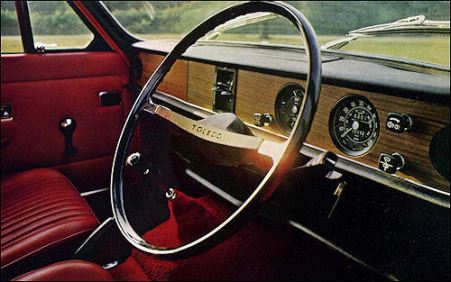 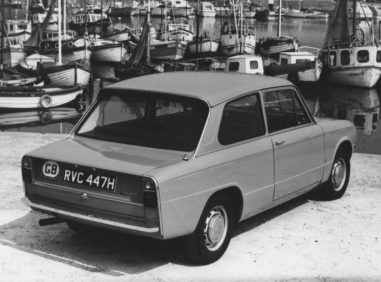 The following year, a four-door model was added to the range, and between then and its demise from UK price lists in 1976, minor trim and equipment changes were its lot. The 1500 enjoyed an even shorter lifespan. In 1971, Triumph introduced the Dolomite, another shake of the kaleidoscope which unified the 1500 bodyshell with an upgraded version of the Toledo’s driveline and rear suspension. New however was the slant four 1854 cc engine, co-developed with Saab.

With the advent of the larger engined Dolomite, the die was cast. In 1973, the 1500 received the same treatment, becoming the RWD 1500 TC and three years later, the entire range was rationalised under the Dolomite name and bodyshell, from basic 1300 through to the fire-breathing 2.0 litre 16 valve Sprint.

This form of reverse engineering was not only highly unusual, but an illustration of BLMC’s confused product policy and of Triumph’s outlier position within the new conglomerate. Because from 1970 onwards, Canley was essentially starved of meaningful investment until it pretty much expired of its own accord. Triumph’s atrocious labour record hardly aided matters, but it seems to have escaped BL planners’ notice that the compact sporting saloon template was a growth market, one which they failed to capitalise upon.

One has to wonder too whether a move downmarket with Toledo was an astute use of resources by Triumph management in 1970? Because while it bought them volume (almost 120,000 Toledos were built), it represented finite resource which in retrospect might have better been employed developing and refining the Dolomite line. Certainly, by the mid-1970s, the car both looked and felt dated, despite its other compensatory merits. It’s equally clear that BL’s stillborn SD2 was palpably not the answer either.

Yet, without the Toldeo, would the Dolomite have emerged at all? Certainly it made such a programme both possible and affordable, but perhaps merely prolonged the inevitable. Sometimes it’s instructive to take a step back.

4 thoughts on “A Step Back”