The author reviews his four years with a 2015 Porsche Boxster.

In an ideal world, I would report that my current 981-generation Porsche Boxster, purchased in 2016, directly replaced a previous generation (987…don’t ask) model that I owned for six years and enjoyed tremendously. Unfortunately, I strayed and had a two-month torrid but unfulfilling affair with a Jaguar F-Type convertible before coming to my senses and returning to Zuffenhausen.

The Jaguar was too large, in particular too wide, to be driven with any confidence at (safe) speeds along my favourite sinuous country roads. It also proved to be, with all due respect to those who enjoy the game, a bit too golf club for my tastes.

A dismal experience with the incompetent and dishonest Jaguar main dealer who supplied the car and two electrical faults in quick succession, admittedly fixed under warranty without fuss by my local dealership, further soured my feelings towards the F-Type, so I traded it against the car I should have bought in the first place.

My Boxster was purchased as a 5k miles, year-old Porsche Approved Used car. I didn’t view the Boxster before it was delivered, but it was in the right colour (classic Guards Red), and was highly specified, with almost all the options I might have chosen.

Porsche Glasgow was a delight to deal with. They quoted a trade-in price for the Jaguar without seeing it and were willing to haggle a bit on the small difference between this and the Boxster’s advertised price. When they delivered the Boxster and took the F-Type away, there was no nit-picking about its condition (not that there was anything to criticise). The Boxster looked pristine at first glance.

That sounds like a lot of money, but Porsche was pretty niggardly with its standard specification. The 17” wheels looked (deliberately?) spindly, cheap and unattractive to my eyes. The standard radio was a non-DAB unit and didn’t even have a USB port. The only significant option the car lacks is the integrated sat-nav, but I have lived happily without it.

You might have noticed that I qualified my comment about the car’s appearance on delivery. Under the bright fluorescent lights in my garage, I noticed slightly dull areas in the paintwork on the high points of the front and rear wings. This was despite the car being treated to a proprietary paint protection and polish treatment before delivery.

My friendly valeter diagnosed slight abrasion from a car cover, and a machine polish quickly eliminated the marks and brought all the paintwork up to an impressive mirror finish. According to my valeter, Porsche paintwork is just about the toughest and most durable in the business.

The car felt instantly familiar when I took it out for a drive, despite being an entirely new and different car to my previous Boxster, which was itself a heavy facelift of the original model. The flat-six normally-aspirated engine sounds unique and delivers its 261bhp of power and 280Nm of torque with beautiful linearity.

The engine is well matched to the PDK gearbox, which changes gear noticeably more quickly and seamlessly than the ‘Tiptronic’ torque-converter unit fitted to the earlier models. There is a ‘Sport’ setting that delays upshifts, makes it kick down more readily and sharpens the throttle response. It really changes the character of the car, from a smooth GT to out-and-out sports car. It’s an absolute hoot to drive in this mode!

The only way in which, dynamically, the 981 is possibly a retrograde step from the 987 is the steering. The earlier car had hydraulic power steering that was wonderfully light, precise and communicative, allowing you to feel the road surface beneath you. It was so alive that I thought there was something wrong when first drove a 987, having just stepped out of my Mk1 Audi TT 225 Quattro, which was safe but inert, with wholly uncommunicative steering, similar to the Mk4 VW Golf on which it was based. The 981 has electric power steering which, in absolute terms, is excellent, but I think it might not be quite as feelsome as its predecessor’s, however, I’m not nearly a good enough driver to say definitively either way.

My Boxster is cosseted in that it is never driven in the wet and is always garaged when not in use, but that’s entirely out of choice, not necessity. The car is would be very practical for everyday use, with decent sized luggage compartments front and rear and a very well insulated soft-top that keeps wind noise to acceptable levels when up. Our longest unbroken drive was a seven-hour, 350 mile drag from Holyhead to our home, which took in the dreadful M6 motorway and its endless roadworks. We did this with the roof up and felt reasonably ok at the end of it.

The fit and finish of the exterior and interior is first-class. Ergonomics are just about perfect, apart from the inevitable dashboard-mounted handbrake, an unintuitive push-pull switch that requires me to think pull-off every time I first use it. It will disengage automatically, but that requires slightly more engine revs than I like to use in the close confines of our garage. The upgraded sound system is pretty good, but I think the Bose branded system in my previous Boxster had better bass delivery.

The car blotted its copybook only once, shortly after I took delivery. On my way home after a short trip, I got an urgent warning message along the lines of Engine oil below minimum level. Stop as soon as possible. I did so, pulling into the forecourt of a filling station. The car has no dipstick, but does an oil level check every time you start up and was full before I set out. There was no oil under the car, so I was sure it was a sensor failure. Porsche Assistance, however, advised me that I would drive it further at my own risk so I had wait four hours for the car to be recovered and taken to Porsche Cambridge, where the faulty sensor was duly diagnosed and replaced.

One important aspect of the flat-six engine is that it doesn’t like repeated short trips where the oil doesn’t get fully up to temperature, which takes about twenty minutes. Frequent short trips can cause premature engine wear. I make a point of avoiding such trips and will go the long way around to give it a proper run at least once a fortnight*. It’s something to consider if you’re looking to buy a low-mileage Boxster, Cayman or 911: two 25-mile runs a week is fine, ten five-mile runs (to and from the railway station, for example) is not so good.

Porsche servicing is not cheap, but low-mileage cars like mine only need servicing every two years, alternating major and minor services that average out at about £300 per year. A good independent specialist (like the one in Norwich that used to service my 987) will probably charge about 60% to 70% of the Porsche hourly labour rate. Some will say that bi-annual oil changes are too infrequent, even on a low mileage car, but I defer to Porsche’s expertise in this regard.

I’ve only fitted two aftermarket extras to my Boxster. One is a toughened glass wind deflector between the rollover hoops, replacing the standard framed net item to improve rear visibility. The other is a set of grilles that fit within the two front air intakes, to protect the air-con condensers and radiators from being blocked up with leaf debris and, more importantly, being damaged by stones flung up from the road. I learnt about this risk the hard way on my previous Boxster.

It’s very annoying that Porsche does not fit such grilles as standard, and outrageous that any car so fitted will fail the Porsche 111-point check that is required to extend the manufacturer’s warranty! 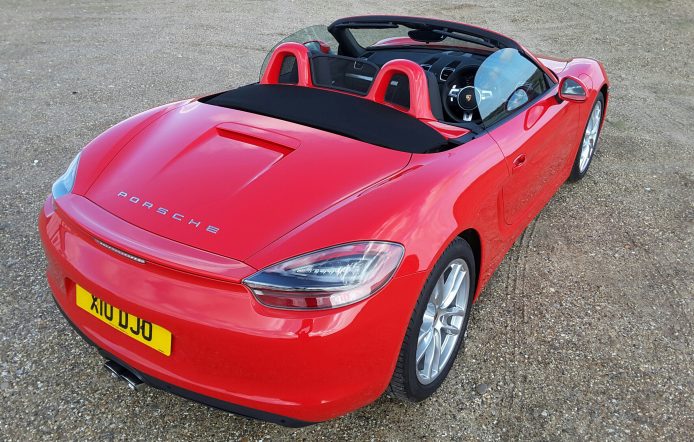 So, in summary, the Boxster is beautifully built, a brilliant drive and surprisingly practical. Sadly, the only road-focused Boxster now available with the sublime flat-six engine is the range-topping GTS, starting from around £66k. Lesser models have to make do with a turbocharged flat-four engine, which is very powerful, but lacks the flat-six’s linearity and wonderful engine note.

Interestingly, used prices of late flat-six models like mine are remarkably strong, to the extent that I’ve pretty much recovered the £5k notional loss I suffered when I traded in the F-Type. This reflects the expectation that the flat-six will never return to the lower order Boxsters, which is very sad for those of us who regard it as the car’s finest feature.

* This report was written before the imposition of the current lockdown. Sadly but necessarily, the Boxster hasn’t moved from the garage for the past seven weeks. A trickle charger keeps the battery in shape.